This week Netflix released an application for the iPhone and iPod Touch so you can stream movies and television shows to your portable device. It was announced this past Thursday on the official Netflix Blog:

“Jamie Odell, director of product management, here. We hinted at a free Netflix App for the iPhone and iPod touch in April, announced it in June and I’m happy to share that it is available now! If you want to instantly watch TV episodes and movies on your iPhone or iPod touch, all you need to do is get the free Netflix App from the App Store at http://iTunes.com/apps/netflix and have a Netflix membership starting at $8.99 a month. What’s the first thing you’ll watch via your iPhone or iPod touch.” 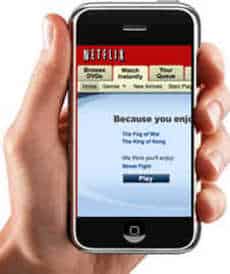 A few good points about this application are: