If it wasn’t for the curiosity of a member of the public, and the ability of most mobile phones to take videos, the incident involving a police officer hitting and pushing Tomlinson to the ground might never have surfaced.

Sure, there may have been “eye witnesses” without the video evidence, but we all know how far that would have progressed if the enquiry was left in the hands of the police. Even with the Tomlinson incident, we are already seeing attempts to cover up the attack.

As everyone knows, the UK (and the US soon) is almost drowning in CCTV’s, they are everywhere. If you throw a cigarette or sweet wrapper onto the street, it is recorded and you will be fined if caught. Bus stops have hidden cameras to catch vandals. Yet despite this incident happening in a busy street, the police have been unable to find a CCTV recording of the officer coming into contact with Ian Tomlinson. Apparently they have shots of Tomlinson coming towards them and walking away, but a very convenient gap in between. 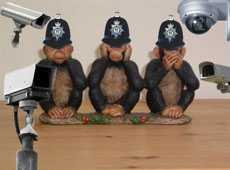 Whilst it is difficult to tell from the mobile phone video, Mr. Tomlinson did appear to be walking in a strange and almost confrontational manner in front of the police, but that is no excuse to respond in such a way. He had his hands in his pockets and was completely defenceless.

The whole point of all these CCTV cameras, so we are told, is to help keep the public safe and uphold the law, but once again we see that the police seek immunity from a law that applies to them too! Must we remind the police that their job is to enforce the law, not to judge and punish people? We have courts that are supposed to do that.

Perhaps the huge amount of money being spent on all these CCTV cameras (and the people who watch them) could be put to better use, like creating new employment which will benefit the local communities. Wouldn’t it be better to encourage people to develop a natural pride in their local region, rather than treating them all like inmates in a concentration camp? Unfortunately, Big Brother has different ideas it would seem.

Having seen the benefit that a single mobile phone camera can bring in respect of justice, maybe the public should consider joining the police in setting up their own cameras in various locations? Not only would this help the police, by providing additional evidence following a crime, but enable the public to monitor police actions as well. Or should the public be the only ones afraid of doing something wrong?