Losing a job and the subsequent disheartening lack of a sense of place in the world, are sobering themes accelerating lately in movies as the curent economic crisis spreads. But rare is the film that sheds a compassionate light on that ever growing population of adult orphans known otherwise as the elders of our tribe, whose loss of work and feeling of purpose that comes with growing old is nothing new. And which eats away at the soul no matter what the economic pulse of the nation.

But having none of it, is Michael Caine giving the youngsters a piece of his mind as former itinerant magician The Amazing Clarence, in John Crowley’s Is Anybody There? No longer quite so amazing, this rebelliously minded angry old man is also not at all shy about informing anyone crossing his path when in his chronically dark mood, that they’re surely depriving some village of its idiot somewhere.

By now a nearly clinically depressed homeless widower, Clarence resentfully resigns himself to moving into a family run English seaside old age home. Turned off in the extreme by the sight of the elderly or even being one himself, Clarence refuses to accept old age and devises a strategy instead, for exiting this world as soon as possible. 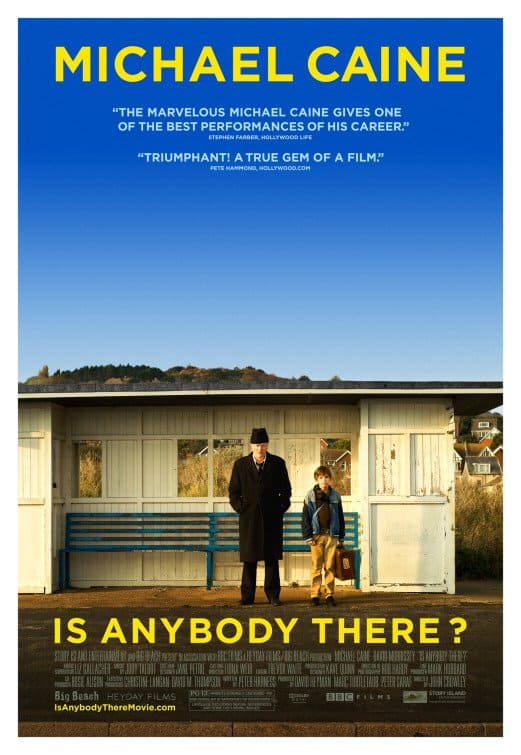 Likewise annoying to the eloquently short-tempered Clarence is Edward (Bill Milner). He’s the lonely and bored only child of the home proprietors who is awed by the down in the dumps magician. And Edward attaches himself to Clarence in order to discover a trick or two up his sleeve, whether the obstinate grouch likes it or not.

But all that seems to matter to Clarence, is that he’s a failed magician if he can’t do a thing to summon his departed spouse back to life. Until that is, Edward performs a little incidental magic of his own, touching the devastated senior’s life in miraculous, unanticipated ways.

In Anybody There? is graced with a combination of playful humor and gentle emotions connecting unlikely generations. Even if the thought of returning to the planet as a born again badger when dispatched to the afterlife, is the elixir of choice that may shake the incorrible Clarence out of his miserable funk.