Today, June 16, the Solicitor General for the State of California was asked by Circuit Judge Carlos Bea to make it clear that his understanding is that the State’s position is that the Second Amendment “core right” defined in the 2008 US Supreme Court Heller decision can apply outside of the home?

The State of California replied “Yes, with a qualification.” That qualification being that the Second Amendment does not confer the right to carry a handgun concealed especially in cities and towns.

Legally, all I need to prevail in my Open Carry lawsuit, Nichols v. Brown, is for the Court of Appeals to conclude that I have a right to openly carry a loaded firearm in the area immediately surrounding my home (the curtilage) because it does not matter what restrictions the State can legitimately place on areas beyond the curtilage of my home so long as the laws I am challenging prevent me from exercising my Second Amendment right in the curtilage of my home. Something which California law currently prevents me from doing. I cannot so much as sit on my porch in a rocking chair with a loaded flintlock rifle at my side without violating California’s 1967 ban on openly carrying loaded firearms. A ban which the NRA helped write and a ban which the NRA has been defending these past five years and a ban which the NRA again said today before the en banc court is constitutional.

In the case of a total prohibition on both concealed and Open Carry the State’s position is that “dangerous weapons” can be “regulated” in cities and towns regardless of whether or not they are carried openly or concealed. 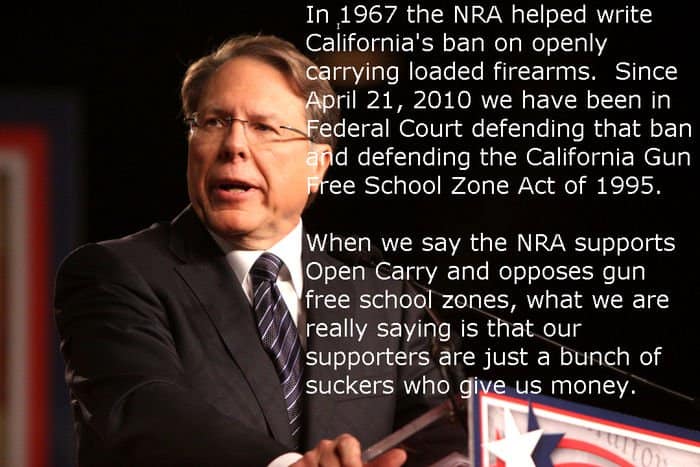 In my June 8th analysis of the how the eleven judges on the en banc panel were likely to vote, I placed Circuit Judge N.R. Smith in the “unknown” column. During the en banc oral arguments Judge Smith flat out told the SAF lawyer, Alan Gura, he is going to lose. Likewise, Circuit Judge M. Margaret McKeown moves from the unknown column to voting against Peruta/Richards based on her questions during today’s oral arguments.

Circuit Judge Richard Paez asked whether or not the local policies of the Sheriff could be interpreted in such a way that the en banc court wouldn’t have to decide the case. He got a long answer which wasn’t “yes” so “Constitutional Avoidance” is probably off the table.

The state suggested that perhaps the correct course of action is to remand the cases back to the district courts. A suggestion the NRA and SAF plaintiffs rejected.

The stay in my Open Carry lawsuit expires on August 14th. Given the concession by the State of California in today’s oral arguments I believe that I am entitled to a Summary Reversal back to the district court with instructions to issue the injunctions against California’s bans on openly carrying loaded and unloaded firearms.

“[A] right to carry arms openly: “This is the right guaranteed by the Constitution of the United States, and which is calculated to incite men to a manly and noble defence of themselves, if necessary, and of their country, without any tendency to secret advantages and unmanly assassinations.”“ District of Columbia v. Heller, 128 S. Ct. 2783 (2008) at 2809

“In Nunn v. State, 1 Ga. 243, 251 (1846), the Georgia Supreme Court construed the Second Amendment as protecting the “natural right of self-defence” and therefore struck down a ban on carrying pistols openly. Its opinion perfectly captured the way in which the operative clause of the Second Amendment furthers the purpose announced in the prefatory clause, in continuity with the English right…Likewise, in State v. Chandler, 5 La. Ann. 489, 490 (1850), the Louisiana Supreme Court held that citizens had a right to carry arms openly: “This is the right guaranteed by the Constitution of the United States, and which is calculated to incite men to a manly and noble defence of themselves, if necessary, and of their country, without any tendency to secret advantages and unmanly assassinations.”“ District of Columbia v. Heller, 128 S. Ct. 2783 (2008) at 2809

“Like most rights, the right secured by the Second Amendment is not unlimited. From Blackstone through the 19th-century cases, commentators and courts routinely explained that the right was not a right to keep and carry any weapon whatsoever in any manner whatsoever and for whatever purpose. See, e.g., Sheldon, in 5 Blume 346; Rawle 123; Pomeroy 152-153; Abbott 333. For example, the majority of the 19th-century courts to consider the question held that prohibitions on carrying concealed weapons were lawful under the Second Amendment or state analogues. See, e.g., State v. Chandler, 5 La. Ann., at 489-490; Nunn v. State, 1 Ga., at 251…” District of Columbia v. Heller, 128 S. Ct. 2783 (2008) at 2816