Madeleine McCann was remembered in church services in England and Portugal yesterday. One year ago, the then 3 year old disappeared from the holiday apartment in Portugal where her younger twin siblings were also sleeping.

Madeleine turned 4 years old just days after that fateful day, and one year on, it seems that this little girl is no closer to being home with her family. During this past year, investigating police in Portugal have been dismissed amid accusations of bungling the case, Madeline’s parents Gerry and Kate McCann were named as suspects – and still remain as such. Sketches of another person police want to interview have been distributed, and the international media still covers this terrible tragedy.

An official website has been set up and a reward offered, as it is reported that Maddi’s younger siblings play ‘pretend’ anad make imaginary phone calls on their toy phones to their missing big sister. To read the story of this precious child on that site is gut-wrenching:

Madeleine was born in May 2003 – a long-awaited and very much longed for the little girl. She lives in the village of Rothley in Leicester, with her mummy and daddy and little brother and sister, Sean and Amelie. 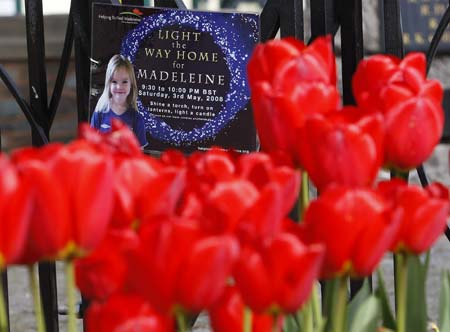 A poster of missing British girl Madeleine McCann hangs on a war memorial in the centre of Rothley, central England May 3, 2008. Madeleine McCann vanished from the family holiday apartment in Praia da Luz, Portugal, on May 3, 2007. Her family and friends are marking the one year anniversary with church services in Praia da Luz and Rothley which will be dedicated to all missing children, including Madeleine.(Xinhua/Reuters Photo)
www.chinaview.cn

Madeleine is a very happy little girl with an outgoing personality. She has always been a very popular little person, appealing to both children and adults alike with her funny and engaging chatter. She has many friends who obviously miss her dearly. Despite her young age, it often felt like Madeleine had been on this earth before!

Like most girls her age, she likes dolls and dresses (and anything pink and sparkly) but with a definite taste for action-adventure too! She has an incredible amount of energy and even as a little baby, didn’t seem to need much rest. She enjoys running and swimming and is an Everton fan like her mum and granddad.

Madeleine has always been a wonderfully loving and caring big sister to Sean and Amelie. It was certainly not the quietest house on the planet with lots of giggling, singing and the inevitable odd bit of mischief! For Sean and Amelie, there is without doubt, a very important person missing in their life.

Madeleine is a warm, life-enriching little person and will never fail we’re sure, to bring joy into the life of anyone she may encounter. [link: http://www.findmadeleine.com//]

The McCanns, who are living every parent’s worst nightmare, continue to assert their innocence as they focus on trying to find answers, and maintain some sense of normalcy for the younger children.

Madeleine’s grandmother, Susan Healy, asked supporters of the family in Britain and Portugal to light candles at 9:15 pm tonight to mark the moment they believe Madeleine was abducted.

As they search for clues about their own beloved Maddi, Kate and Gerry MCann also find themselves deeply – and unexpectedly – involved in campaigns focusing on all missing and exploited children. Every year children go missing, never to be seen again by those who love them. Every parent feels totally helpless in the face of any of these stories. As the McCanns get through each day of their own nightmare, Kate McCann asks the community to do what all of us CAN do: “Pray like mad for Madeleine.”