The Don of consumer protection Bob Corker has decided that Loan Sharking doesn’t need to be regulated. Did I say Loan Sharking? I meant Pay Day Loan Companies. You know those pillars of the community located next door to the local liquor store. 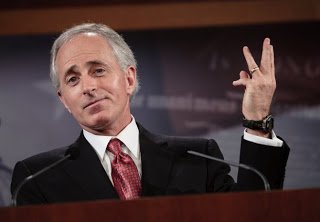 W. Allan Jones, who started Check Into Cash, in Cleveland, Tenn., in 1993, has been a longtime friend and supporter of Mr. Corker’s. The company says it is now the country’s third-largest payday-lending chain, with 1,100 stores in 30 states. Payday loans are short-term, high-interest loans – typically 400 percent on an annualized basis – to help borrowers cover expenses until their next paycheck. Many take out more loans, digging themselves deeper into debt.

Mr. Jones, his relatives and his employees have given money to Mr. Dodd, Mr. Shelby and other members of the Banking Committee, but have been particularly active donors to Mr. Corker, records show. They have contributed at least $31,000 to his campaigns since 2001, when he was running for mayor of Chattanooga.

Listen to what Jones has to say about possible regulation. this is from the Chattanooga Times Free Press,

“But payday industry leaders such as Cleveland, Tenn., businessman W. Allan Jones said the proposed cap on interest rates would destroy an industry that helps millions of Americans get short-term loans during financial emergencies and “hasn’t taken a penny in any government bailout money.”

“Our critics are attempting to capitalize of fears and misinformation generated from the recent credit crisis to further their agendas of total federal control,” Mr. Jones said. “Small microloans of $200 didn’t cause the nation’s financial crisis, yet the industry is criticized by those who did the damage.”

That’s right Jones when in, doubt blame the bailout. I’m sorry, I do not care if your legalized Loan Sharking Business goes belly up. All it does is exacerbate an already viscous circle of debt, all to many Americans cannot get out from under.

For full disclosure I would like to admit I voted for Bob Corker. That being said, I am truly amazed that $31,000 in campaign contributions trump any sort of decency. Those companies charge 421% annual interest. Mr. Corker ask yourself this. What did we do without these companies? I’m pretty sure these corporate leeches are not tied to any community success whatsoever, unless the local meth dealer is also a campaign contributor. I need a shower.