When news first broke in late 2011 that the once much touted Costa Rica real estate project Hacienda Matapalo was in financial trouble, investors became concerned.

One doesn’t have to look far on the Internet to see the bold claims Hacienda Matapalo were making leading up to the breakdown – they claimed to have collected over $65 million in pre-sales on the now abandoned property.

But what happened – what ultimately brought down the so-called #1 best-selling Costa Rica real estate project?

There were many things – including large corporate salaries and out of control marketing budgets in the millions – Hacienda Matapalo had hit the iceberg and was heading for disaster.

Spearheading the marketing budgets for Hacienda Matapalo was Ed Sklar.

Ed Sklar quickly became known all over the professional network – Linkedin. Some days he could be seen posting 3-5 times per day. For every bucket of dirt moved at Hacienda Matapalo … Mr.Sklar wrote about it. 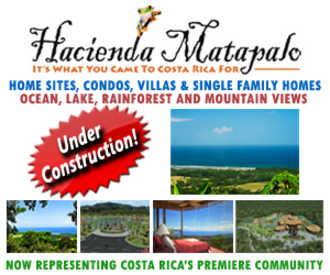 In doing so, this would create a false sense of security for investors – they would believe that given its sheer size and market domination, surely the project must be financially secure.

However there have been many Costa Rica real estate projects like Hacienda Matapalo – all having more in common than you think.

It was during a federal lawsuit in Florida, that it was allegedly a “Ponzi-type scheme” that targeted people nearing retirement who were open to considering retiring in Costa Rica.

More than 900 investors fell victim to this scam.

“We don’t have the funds,” he said. “They are not there, but we continue to work for [Paragon Properties’ clients].”

Not a single investor of Paragon Properties has been able to build on their “dream property” nor have they received permits.

The lawsuit against Paragon Properties names 32 individuals or companies that were allegedly involved in the Costa Rican land offer.

In the case of Hacienda Matapalo (also from Florida), this all begins to unravel and edges ahead in similarities to Paragon Properties.

Earlier in 2012, investors would discover that the Florida offices of Hacienda Matapalo were quickly evacuated and closed up. Phone lines were being disconnected for non-payment while debtors were burning up the emails to directors like Ed Sklar and David Matluck in order to attempt collections on overdue accounts.

Meanwhile, back in Costa Rica, it was much of the same.

Nathan Posey and Keith Blackburn were both employees of Hacienda Matapalo, and were part of the Costa Rica sales office located on-site. They would end up vacating the project in late 2011 and have not returned.

Since then, all of the previous directors of Hacienda Matapalo have been removed, while the lender – UTA Capital – has now defaulted on the development and taken possession.

As a purely investment oriented venture, UTA Capital has never intended to enter the developer market and therefore it is unlikely the project will ever see construction onsite until it is acquired by someone capable of building out such a massive undertaking.

With all the directors of the now defunt Hacienda Matapalo moving on and seeking employment and starting new companies, where does that leave investors?

Up until now, Hacienda Matapalo investors were, for the most part, unorganized.

However it appears that this might be changing, as more concerned investors contact renowned Costa Rica legal firm, AG Abogados of San Jose, Costa Rica.

“Every day, we are receiving calls and emails from concerned investors of the Hacienda Matapalo project,” Gonzalo Gutierrez said, during a telephone interview while visiting the US.

With angry investors now moving towards organizing themselves, the term “class action” comes to mind.

This may be the only hope investors have of retrieving their cash.

Read more about AG Abogados and Lic. Gonzalo Gutierrez at: