CHICAGO – The United States Olympic Committee showcased their uniform ensembles by fashion house Ralph Lauren and there is a wrinkle. The USOC announced that the 530 athletes that will represent the USA will all be wearing a ‘classic’ elegant look. This soft-retro was achieved for the American athletes with a look back to the 1948 London Olympics.

There is now a controversy regarding the collection pieces because they were manufactured in China. You would think they’d (USOC) know better,” said U.S. House Speaker John Boehner (R-Ohio).

Athletes Not Fazed By Flap

Some American athletes didn’t seem bothered by the flap, “It’s a global world we live in,” said beach volleyball player Todd Rogers. Rogers, who won gold in 2008, added, “I would say there are much bigger issues to worry about than where Ralph Lauren has the opening ceremonies clothes made.” 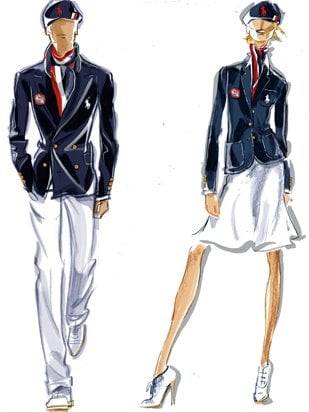 “Everything Ralph Lauren did was so, so cool,” said swimmer Missy Franklin. “To be able to wear those (pieces), or have the opportunity to, is so exciting,

David Lauren, son of the famed designer said, “Knowing that we were going back to England, we tried to instill a feeling from the movie “Chariots of Fire.”

Men will wear cotton club-collar sport shirts, red and navy ties and double-breasted blazers. Female athletes will don similarly embroidered fitted navy blazers. Silk will be the fabric for the knee length cream skirts accented with silk scarves. The women will have a pants option also

This will be the third time the famed fashion house and the USOC have teamed up for apparel. Lauren said, “The goal was to build on what was popular last time.” “We wanted something that felt very classic, very elegant but at the same time would be easy enough and comfortable enough for the athletes to feel good.”

He added, “The key is in the sharp tailoring, done in a way that gives every athlete an opportunity to look good. … You have to create something that will work for a wrestler or a basketball player, as well as a tiny gymnast. All of those body types, coming up with silhouettes that can be flexible and comfortable is quite a task.”

U.S. Olympic Committee leaders, gathered in Chicago for the Olympic Hall of Fame induction ceremony, reacted with surprise and disappointment to the clothing controversy.

“All this talk about Olympic uniforms made in China is nonsense,” said USOC Communications Director Patrick Sandusky. “Polo-Ralph Lauren is an American company that supports American athletes.”

“These are great uniforms that represent our team well, our American team. This is a company that employs thousands of people in the U.S., supporting their brand and supporting our team,” Sandusky added,”Each ensemble has a cost of about $1,500 to $1,900 that is an in-kind sponsorship. The Ralph Lauren Company gets to sell replica garments online, mail order and through their retail stores.

This is not the first time that Team USA uniforms have been produced in other countries. Ralph Lauren also designed the clothing for the 2008 Olympics in Beijing and outsourced then to China as well. At the 2010 Winter Olympics in Vancouver, a Canadian company produced Team USA clothing.

Timing contributed to the clothing controversy because in Washington this week, lawmakers have announced a “Make it in America Initiative,” aimed at developing legislation to spur production and manufacturing in the U.S.

In the clothing industry, the term ‘soft-line chain’ is the watchword and this entails concept to shelf. All this work including design was done in the United States. Ralph Lauren is an international company.

“Everything Ralph Lauren did was so, so cool” – Missy Franklin

Both the men and women will wear berets. The navy beret with red and white stripes will have U.S. Olympic patch and embroidered Ralph Lauren Big Pony logo.

During the Olympics, wool and felt will be prevalent with other souvenir offerings. Throughout the United Kingdom the rich history of Britain’s garment industry will be celebrated.

Rayneld Johnson, Ph.D., costume historian and professor of Fashion Design and Merchandising at Wayne State University in Detroit commented that the fashionable designs for the American team present a stylish sharp image. She added, “The ensemble pieces capture the English and American culture fusion and reflect the psychology of the times.”

Pin trading is a popular activity for spectators, locals and participants of the games. Coca-Cola, a longtime sponsor of the Olympics, will again highlight the United Kingdom, by having pin-centers for collecting. There are 182 official Coca-Cola 2012- London Olympic pins. Also, Coca-Cola selected deserving young people, who added to their communities through sports and arts to participate in carrying the torch.

The London Olympics will take place between July 27, and August 12, with NBC televising the events in America. Right up through the opening ceremonies, the Olympic Torch Run can be seen live London2012