The state of Israel was reestablished in 1948 to end the Jewish nation’s 2000 years of homelessness.

From the time the Romans expelled the Jews from their homeland, Judea, in 70AD, to be scattered all over the world, they were vagabonds. They lived in hosting countries, as a marginal, fringe society, most times lacking equality with the rest of the country’s citizenry.

Jews often found themselves expelled from a country where they had established a fully functioning community presence. During those years, Jews suffered religious and ethnic oppression and prejudice, anti-Semitism, persecution and mass murder, the last one was the devastating Holocaust. After 6 Million Jews were systematically murdered by Nazi Germany, the world, rather reluctantly, did the Jews a favor and voted to allow them to return home, to the Land of Israel and Judea.

Atrocity Led To A State and a Home

That sense of guilt, after causing the Jews the worst atrocity in the history of the world to have been perpetrated on human beings, from which people and nations may have suffered – or have pretended to have suffered from – did not last very long.

The moment the nascent modern state of Israel was created and Jews began to gather and rebuild their reestablished homeland, the only Jewish country in the world, Arab countries began their attacks on Israel and the Jews living there. Since that time, attacking Israel has taken many forms, coming at her from all over the world, a form of collective anti-Semitism. But it did not stop there; Jews living outside Israel, automatically identified with the Jewish state of Israel, have begun experiencing the millennia-old anti-Semitic sentiments, simply because they are Jews.

StandWithUs: Standing With And For Israel

Roz Rothstein, a daughter of Holocaust survivors, could not sit idly and see that attacks on Jews, that culminated in the Holocaust, may be starting all over again, lacking the defiance from the Jews. Twelve years ago, Roz and her husband Jerry and the community activist Esther Rezner, founded the organization StandWithUs (SWU), its goal is to stand with and for Israel, by educating people about Israel, on campuses and in the community, inside and outside of Israel. This is a kind of preventative medicine and possibly a cure for the venomous anti-Semitic disease. The organization’s committed and passionate team works tirelessly to meet the challenges facing the pro-Israel community, i.e. providing educational material on a verity of Israel-related topics, strengthening and empowering students to be able to effectively debate anti-Israel people and campaigns on all subjects relating to Jewish and Israel’s history and jurisprudence.

But most important work SWU took upon itself is to teach and prepare the next generation that did not experience the persecution Jews have been through for 2000 years; that is to stand for the nation of Israel and for its only nation state, Israel. 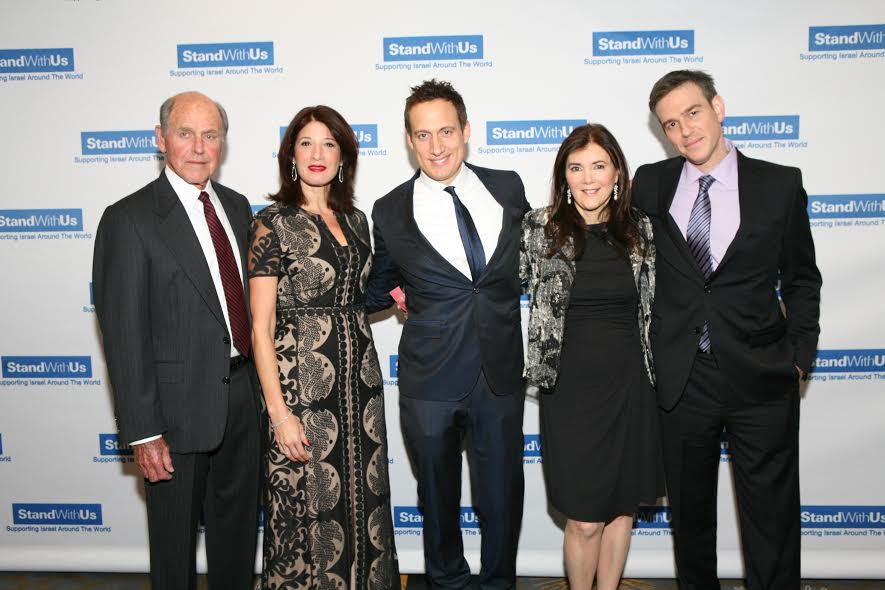 These days anti-Israel sentiment and anti-Semitism are becoming rampant on campuses. Without the right tools, Jewish students are at disadvantage when entering college. Here is where SWU steps in to educate, through conferences, social media and speakers’ programs.

SWU spreads its wings with offices all over the world, including Israel, Canada and Britain.

Until there is peace in Israel and until anti-Semitism has vanished from the world, StandWithUs will work tirelessly to educate Jews and non-Jews alike, in an ongoing effort to ensure support for Israel tomorrow. For if there is no Israel, the Jews will become homeless again and that is a risk the Jewish nation cannot allow or take.

This week, at the Century Plaza Hotel, in Los Angeles, 1,200 donors and supporting guests gathered to partake in StandWithUs – an organization not for profit – annual fundraising gala, ‘Festival of Lights,’ celebrating the organization’s 12 years – Bat Mitzvah – achievements.

The program, emceed by Elon Gold, included opening words from Israel consul general David Siegel, performance by anti-Boycott rapper Ari Lesser and Ronny Weinreich, a disabled IDF soldier-turned singer. Speeches were delivered by SWU campus leaders Vida Velasco and Elad Menna and the honoree was the entrepreneur, philanthropist who has become an ardent Zionist, Myron Zimmerman. Myron Zimmerman is the founder of the MZ Foundation and its goal is to empower students to stand with Israel and he is the person behind the funding of SWU-MZ Teen Internship and ‘Israeli Soldiers Stories’ programs.

The keynote speaker was Pulitzer Prize winning journalist, Bret Stephens. As a former editor-in-chief of the Jerusalem Post, Bret understands the situation in which Israel finds herself; as a Jew he understands the circumstances Jews are facing.

Stephens, as always brilliant, in his low key but profound speech delivery style, left the audience with food for thought second to none. His speech was centered on the nuclear Iran threat to the entire world and in particular, Israel. He compared the interim agreement, the USA, EU, Britain, France, Russia, China and Germany (the P5+1) have just signed with Iran to the situation the South African apartheid regime found itself in years ago.

Sanctions eliminated the South African apartheid AND dismantled its nuclear program. Sanctions on Iran must increase until Iran clearly understands that their sweet talk and deceitful modus operandi will not help them to keep their nuclear program.

Bret’s explanation of the meaning of the state of Israel and the people who advocate for her, just like SWU, left no room for misunderstanding.

“We support Israel because it is OURS!”

And that is the junction where Bret Stephens, StandWithUS and every supporter of Israel meet to strengthen the Jewish state and the Jewish nation for whom the state of Israel serves as the nation state.

Philanthropists and Zionists such as Sheldon and Miriam Adelson, Debbie and Naty Saidoff and Bruce and Ellie Lederman are among those who continuously support SWU. What is interesting, is that in the past, people born in Israel, now living abroad, did not understated how intensely important the existence of the state of Israel is to Jews. But these days, they are slowly coming around and becoming major supporters of organizations that stand by and for Israel, just like StandWithUs. 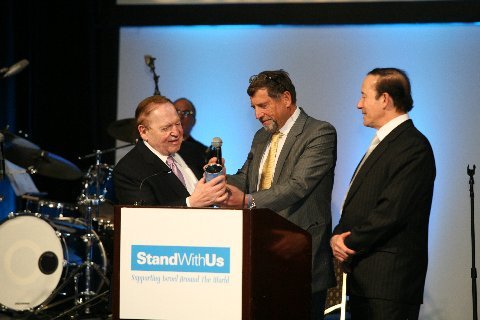 The challenges Israel has been facing since it was recognized as a sovereign state, from delegitimizaiton, to Boycott, Divestment and Sanctions (BDS), to threats and attacks from her Arab neighbors, the terror organizations Hamas and Hezbollah and now the nuclear threat from Iran are ongoing. But despite it all, the Jewish state is there to help other nations when finding themselves in despair and she shines among nations in so many ways.

And to that, as they say, Yishar Ko’ach!