I met Pastor John Hagee and his wife Diana before he had started the project A Night To Honor Israel and before CUFI was born. We were a small group of people who were invited to listen to a man who claimed to be a Christian-Zionist. The name alone made me skeptic. But I was willing to listen and I did. I became an instant admirer of a man I would easily adopt to be my father.

The video angered me and was a letdown because it has a tone of Christian replacement theory; after all Pastor Hagee makes no bones about the fact that the Christian replacement theory is not his thing. He does not believe that God has forsaken His children, the Jews, and replaced them with the Christians, a theory that brought about the senseless murder of countless of Jews. I expressed my anger publically and I kept my hope that Pastor Hagee did not mean harm to Jews when he declared in the video that Jesus will rule for 1000 years from Temple Mount. After all, Temple Mount is the holiest place on earth to the Jews and it belongs to them.

When it comes to the state of Israel it is difficult to remain angry and disrespectful of Pastor Hagee; because he is a genuine Christian-Zionist that even Theodore Herzl would be proud of.

So when I received the announcement that CUFI is going to hold, first time, A Night to Honor Israel in Los Angeles and Pastor Hagee will be the keynote speaker I saw it my duty to attend. Because there is no better friend to Jews and Israel than Pastor John Hagee and his organization, Christians United For Israel.

On August 26, 2012, at the Saban theater in Beverly Hills CUFI put together a magnificent evening to honor Israel. In between the speeches, the wonderful Gatekeepers choir sang in Hebrew and English. They started with the United States anthem following by the State of Israel anthem -Ha’tikvah, they sang twice, in a raw, in the most beautiful rendition. The speakers included David Siegel, Israel Consulate General to the Southwest US, rabbi David Woznica, of Stephen Wise Temple and rabbi David Baron, of Temple of the Arts at the Saban Theatre in Beverly Hills, as well as CUFI leaders from several CUFI centers.

All along the evening, to express their feeling to what speakers said the audience waved the flags of the United States and Israel each guest received as they entered the hall.

Before Pastor Hagee delivered his speech, as customary among Christians, the collection buckets were passed around and people’s wallets opened to donate. CUFI is a nonprofit organization and our dollars pay for their fight for fair play for Israel, for Jews on campuses as well as fund projects in Israel.

The crescendo of the evening came with Pastor Hagee’s speech. No one is better than he to express his unconditional and genuine support for the Jewish nation and the state of Israel.

It is no easy task to repeat what comes so naturally to Pastor Hagee. Some highlight of the speech are worth attempting to repeat. 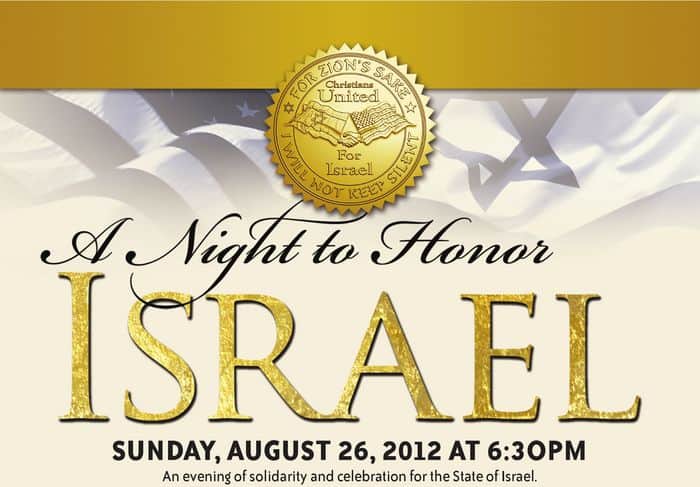 Pastor Hagee first visited Israel in 1978 as a Christian and returned to his hometown San Antonio, Texas a Zionist. In Israel he saw an elderly Jew praying at the Wailing Wall with such devout it affected him greatly. Visiting Jerusalem for the first time Pastor Hagee felt spiritual connection. For him Jerusalem is the center of the world. If the city was good for Jesus it is good for every Christian to go visit.

And there were many obstacles to overcome, from rejection, threats – verbal and physical – and even face Nazi protests.

He first had to begin recruiting Christians and teach them that they cannot expect Jews to accept them before they support Jews and their homeland. Then Pastor Hagee had to gain Jews’ trust. After all, millennia of Christians persecution of Jews has closed all the doors of trust. That trust building is an ongoing process as many Jews still live in trepidation of the trail of Jewish blood Christian left behind throughout history.

And there is the difference between the two faiths. To that Pastor Hagee jokes that if he is walking in Jerusalem with one of his Jewish friends and the Messiah comes, they will have a theological discussion about it.

Since his first visit to Israel the Zionist Pastor Hagee has been to Israel 30 times. He takes Christian groups to Israel to introduce to them the land of Jesus. He believes that Jews do not need a reason to be Jewish but Christians without Jews have no religion, as Jesus, who gave birth to Christianity, was a Jewish rabbi.

Pastor Hagee objects to the UN equating Zionism to racism. It is wrong he says and the UN is wrong on most issues. He calls to end all funding the UN as well as to the Arab-Palestinians until they acknowledge Israel’s right to exist and end all hostilities and terror against Israel.

The Idea of organizing A Night to Honor Israel came after Israel destroyed the nuclear reactor Osirak in Iraq. The US media heavily criticized Israel and Pastor Hagee saw the need to stand with Israel. To organize the first night to honor Israel was difficult, but Pastor Hagee was adamant and never gave up. First event took place with a small number of attendees. Nowadays, each year, CUFI holds A Night To Honor Israel in 40 USA cities. Los Angeles had its first event this past weekend.

To be one of CUFI’s 1.2Million and growing member, one needs to be a firm, reliable and truthful friend of Israel. We are living in dangerous and challenging times for Israel and Christians and our unity is our strength says Hagee. The US and Israel are two exceptional nations facing the bestial genocidal Iran.

CUFI is very active on US campuses. Their ongoing goal is to level the plain at the university so Jews have a fair hearing.

Pastor Hagee’s speech is full of meaningful slogans, i.e. you cannot change what you cannot control; the USA and Israel are indivisibly united; persistence overcome resistance; never wrong to do the right thing; truth will endure forever; you cannot be all things to all people and to stand with Israel you either support Israel or you don’t.

CUFI also holds a yearly conference in Washington to express its unwavering support for Israel. On Capitol Hill they know that CUFI will support you on the base of your support for Israel; you do, they will, you don’t they won’t.

CUFI means United States and Israel as one, it means the right of Israel to exist, it means that the way you treat Israel you shall be treated in return and that includes the USA.

CUFI’s slogan is For Zion’s sake I will not keep silent; Israel you are not alone. This means this land – the land of Israel – is mine and mine is the Jewish people’s land.

So Pastor Hagee, I apologize for getting mad with you and the video I watched earlier this year; as long as you unconditionally embrace and support Jews and the state of Israel, I am one of your soldiers.

Anti-Semitism is an ancient disease the world has not got rid of yet and it exists in the USA as well. Today Israel is under constant attacks and Jews are persecuted again. There is no better way than to have 50Million Evangelical Christians in your corner. That is what CIFU all about; millions of Christians united with and for Israel, no matter what, and Pastor John Hagee leads the movement.

I strongly suggest to learn more about CIFI and get involved. If only, just attend A Night To Honor Israel.