The pushke-the Yiddish word, from the Polish word puszka, means a tin can. A box placed in a home, synagogue, or other public place, used to collect donations’ money for the Jewish National Fund-JNF; Hebrew: ÷oi ÷eiu ieuoai, Keren Kayemet LeYisrael-KKL.

The JNF was founded in 1901 at the Fifth Zionist Congress in Basel, with Theodor Herzl’s support, based on the proposal of a German Jewish mathematician, Zvi Hermann Schapira. JNF set itself to purchase and develop land in Ottoman Palestine, subsequently the state of Israel, to settle Jews and build Jewish settlement there. Early land purchases were completed in Judea and the Lower Galilee.

In 1909, the JNF played a central role in the founding of Tel-Aviv. The establishment of the “Olive Tree Fund” marked the beginning of Diaspora support of afforestation efforts. The blue box-pushke has been part of the JNF since its inception, symbolizing the partnership between Israel and the Diaspora. In the period between the two world wars, about one million of these blue and white tin collection boxes could be found in Jewish homes throughout the world. 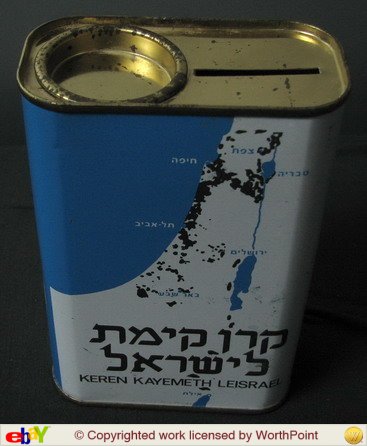 JNF is a quasi-governmental, non-profit organization. Since its inception, JNF has planted over 250 million trees in Israel and by 2007, it owned 13% of the total land in Israel. It has built 227 dams and reservoirs, developed 250,000 acres (1,000 km2) of land and established more than 1,000 parks. In 2002, the JNF was awarded the Israel Prize for lifetime achievement and special contribution to society and the State of Israel.

Most Jews recognize that tin can, which for 111 years has been acting as the silent collector of donations for the JNF. When there was not enough food to put on the table, Jews around the world still found some money to drop in the JNF tin for the purpose of future and hope of the Jewish nation. Jews knew that the future of the Jewish nation depended on them; every coin dropped in the pushke would make the difference. They knew that the nation of Israel owned the deed to the land of Israel, which was stolen from them and the only way to get it back was to repurchase what they owned anyhow, that land of Eretz Yisrael. 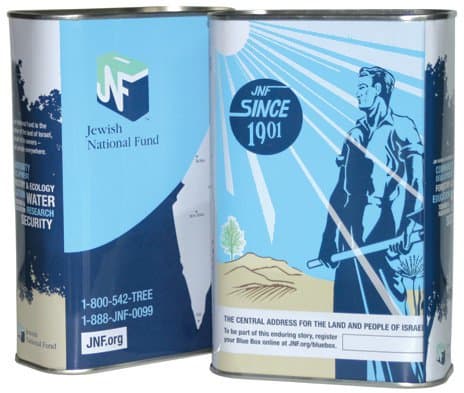 I was told that 500 people showed up for a Gala, its theme this year was to honor Holocaust survivors and their offspring. Certainly the full to capacity hall attested that the survival of the nation state of the Jewish people, Israel, lies deeply with and has relied, for over a century, on those who survived the Pogroms and later the Holocaust, many of them attended the event.

Major General (Res.) Doron Almog, Chairman of Aleh Negev-Nahalat Eran took to the podium to introduce this project, backed by JNF. Aleh Negev is an organization that provides children with severe cognitive and physical disabilities throughout Israel with high-level medical and rehabilitative care to help them realize their full potential; a state-of-the-art communal Rehabilitative Village situated in Ofakim that is providing much-needed services and jobs to the area.

JNF reminds each Jew that we have the rekindled privilege to have a homeland, and it is our time to set the boundaries of our land. Through Aleh Negev we define our boundaries that are not only physical but also to support the weakest of our society.

The host of the Gala was actor and comedian Paul Reiser. Among the speakers were David Frank, JNF Chairman of the Board and the President of the Board, Bud Levin; there was also a presentation of video messages by Holocaust survivors’ offspring dedicated to the Guardian of Israel award recipients: Roman Russ z”l, Cantor Hershel Walfish z”l, Joseph Nissenbaum z”l, Andrew and Yvette Gardner, and Ida Waksberg.

Former super model, turned business mogul, Kathy Ireland, a staunch supporter of Israel, was the recipient of the Messenger of Peace Award and Andrew Stevens, the author of the book Rebel With a Cause, who worked hand in hand with Raoul Wallenberg, in Budapest, Hungary, to save umpteen number of Jews from the claws of the Nazis, received the Tree of Life Award. Kathy Ireland, a non-Jew, gave a passionate speech in support of the state of Israel. All in all, a night to honor heroes and a message of hope.

The Rat Pack Encore band was there to entertain the audience with Frank Sinatra, Dean Martin and Sammy Davis Jr. nostalgia music.

Through perils and atrocities the Jewish nation survived. Jews now have a homeland and with it their dignity has been restored. A strong and united Jewish society will certainly prevail.

The real revenge against the Nazis is the state of Israel. In many aspects, JNF represents the Jewish Tree of Life.

In Israel of the 1950s money was in short supply. Growing up in Israel, I remember that each Friday I made sure to have in my pocket 25 Grush, later Shekel, to drop in the JNF pushke that was passed around our classroom; not having any coin to donate was simply embarrassing. Nothing has change; Israel still needs help. Pick up a pushke and never forget to put few coins in it each Friday; and ask those who visit your home to do the very same.

Your pen that writes the check to JNF still makes the difference in Israel.

Remember, we have come to Israel to build and be built.