An Israeli man, Goel Ratzon, aged 60, has been charged with the enslavement of at least 17 women in what has been quoted as “a harem he controlled like a cult.”

Ratzon lived with his “slaves” in a house in Tel Aviv, fathering more than 30 children with them, and apparently controlled every aspect of the women’s lives with a list of rules that enforced total obedience.

However, they seemed to worship him and met all his demands. Some even obtained tattoos with his image, complete with an inscription calling him their “Messiah”

According to Israel’s police spokesman Micky Rosenfeld, Ratzon has been accused of “causing physical bodily harm to the women and the children, holding them in terms of slavery as well as unfortunately sexual misconduct to the women and children over a long period of time.” Police also believe that Ratzon had incestuous sex with his own daughters, fathering more children with them. 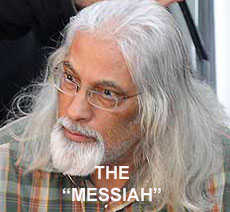 Although Police and prosecutors say he is guilty of two decades of abuse, it has taken at least 10 years for them to act on information provided by the Israeli media and Private investigator Asher Weitzman.

Weitzman is said to have sent female agents into the family and one of them almost fell under Ratzon’s spell. Weitzman said “What he did was he grabbed her face, in a nice way, not a rough way and he said look into my eyes…She looked into his eyes and she says that from that moment she felt like she was losing control.”

Ratzon is not the first, and certainly won’t be the last, to use an almost hypnotic power over the people around him, this has been seen in many other cults.

Even politicians use such techniques to gain support (for different reasons), and President Obama has been accused of doing this in his speeches, placing special emphasis on certain words and making hand movements that strengthen the effect.

Whilst it is comforting to know that Ratzon has finally been charged, one has to question why it has taken so long, especially as evidence was presented 10 years earlier. But this is often the case with offenders like this, who seem to be invisible to the public.

It was interesting to read one readers comment on this case, who did not appear to see any wrong in what Ratzon had done. Maybe this explains why Ratzon, and those like him, manage to get away with such crimes for so long? Nobody cares anymore!