A UN conference on racism, due to take place on Monday April 20, is growing in controversy as Australia and the Netherlands joined the US, Israel and Canada in boycotting the Geneva talks.

Israeli foreign ministry spokesman Yossi Levy called the UN meeting a “tragic farce” and “Officially it is aimed at denouncing racism, but it has invited a Holocaust denier who has called for the destruction of Israel”

President Mahmoud Ahmadinejad of Iran is the only major leader to accept an invitation to the forum, which he will address.

Although Ahmadinejad’s comments about “wiping Israel off the map” have been proven to be an incorrect translation of his actual words, and he has frequently said he questions certain aspects of the holocaust (not that it didn’t happen). Some people still choose to manipulate situations by quoting inaccurate information.

Instead of his (Ahmadinejad’s) opponents using this conference to openly discuss their differences and find some common ground, they choose to try and gag him by putting pressure on other countries, and boycott the meeting rather than talk like mature adults. 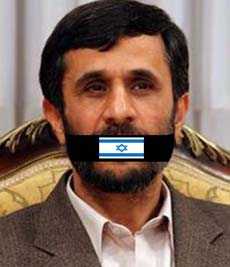 The UK will send a delegation to the conference, but without a high-level official, and have said that its diplomats will leave the hall if President Ahmadinejad repeats his attacks on Israel.

To give some indication of the pressure being applied and which country considers itself the most important on this issue, Aharon Lechnoyaar, the Israeli representative at UN institutions in Geneva said “We are going to try to convince the Swiss president not to meet with Ahmadinejad, the most prominent invitee of this conference, who will give a speech on Holocaust Day and Hitler’s birthday,”

The main reason for countries boycotting this conference appears to be the fear that someone will be critical of Israel (although any other country is not a major concern).

Australian Foreign Minister Stephen Smith said “Regrettably, we cannot be confident that the review conference will not again be used as a platform to air offensive views, including anti-Semitic views,”

Vice Prime Minister Silvan Shalom told army radio that the conference “had but one goal – to slander the state of Israel.”

The United States, along with Israel, walked out of the World Conference on Racism in Durban in 2001 after a row with some Muslim states about anti-Semitism and Israel’s treatment of the Palestinians.

Israel have been accused of “war crimes” in the recent conflict in Gaza (as have Hamas), but will not allow an independent investigation. Many leading figures in Israel have made threats of military action against Iran, and less than friendly comments about Palestinians, Syrians and President Ahmadinejad. Israel support segregation (in their own country), yet feel they have some right to dictate how others should act. Is this sort of racism acceptable?

Meanwhile, the authorities, in countries like Australia, the Netherlands, the US, Israel, UK and Canada are doing a very good job of promoting Islamaphobia, by making the rest of us believe that all Muslims are potential terrorists!

It does not require a great deal of skill to identify which country would like you to believe is at most risk from all the terrible things happening on our planet. A country whose leaders care nothing for the suffering of others, but demand we should do everything in our power to protect them.

According to the definition of “racialism” in my dictionary, it is a belief in the superiority of one race over another, discrimination or prejudice based on this belief, antagonism between different races or towards races other than one’s own, the theory that race determines human development.

Who do you know that believe they are superior to other races, discriminate against other races, antagonize different races (to create a feeling of difference and hatred) and probably think race determines human development? I rest my case.