By omission – of Biblical background, history and jurisprudence – and commission – of dreadful propaganda, lawfare, and lies – lying about Israel is lying about all Jews. That is anti-Semitism.

I attended the screening of 1948: Creation & Catastrophe. It is rather monotonously boring.

Watching this docufilm, I concluded that it is easy to create one’s own reality that does not exist and use it as filmography propaganda.

I will start from the very end of the showing, when a 4 member panel spoke about the film and subjects they derive from it; when one of the panel’s members accuses the claims of Antisemitism tropes as the basis for shutting down free speech of women of color, one is Rep Omar, I walked out. There was nothing more I wanted to hear.

Tlm concocted on much-disconnected messages that use terms and names that are totally out of context.

Throughout the film, the narrator refers to “Palestinians.” There were no “Palestinians” on earth till 1964. They were Arabs who arrived in Israel’s land from surrounding countries.

In constant war mode with Israel, the Arab nations decided to name those Arabs who ran away from the land during Israel’s War of Independence, to never be allowed back or those who did not run away and stayed, “Palestinians.”

It is a name they use as their claim to the land, as a political tool to attack Israel, and support for their “right of return” claim, meaning to flood the land with non-existing five million Arab refugees and thus end Israel’s existence.

The entire production claiming to be a docufilm is based on stories told by Arabs who turned refugees and Jews, most of whom are well known for their ill and inaccurate talk about Israel. That makes this docufilm biased, a one-sided story.

The film banner says it is “A documentary about the Israel-Palestinian conflict” which is deceiving. It all started in 1948 as a conflict launched by the Arab states surrounding Israel. Since 1964, gradually, the conflict turned into the Israel–Palestinian conflict. Before then, the Arabs and the British were in cahoots and very hostile to the Jews who lived in the land.

The Land Belonged to No Nation

Remember, the land did not belong to any nation since the Jews were expelled from it by the Romans. For 2000 years the land was desolate with a small number of Jews who managed to remain living there. When, in the 19th century, Jews began arriving in the land of Israel they created an economic magnet for Arabs to come work for the Jews and they came in large numbers.

The Story of Deir Yassin

A large portion of the documentary content, much of which is purely anti-Israel, is the story of Deir Yassin, of April 9, 1948.

The Internet is full of information about what happened in Dier Yassin, which the Arabs use as their Jews massacre Arabs accusatory blanket.

Here is some information about the battle to capture Deir Yassin, an Arab village of around 600 inhabitants about 5 kilometers (3.1 mi) west of Jerusalem. During the 1948 Israeli War of Independence, the case of this village remains one of the most infamous, yet totally misunderstood, incidents in the history of Israel. During the battle, launched by the Irgun, approximately 100 Arabs died.

Background to the Battle

The United Nations resolved that Jerusalem would be an international city apart from the Arab and Jewish states demarcated in the 1947 partition resolution. The 150,000 Jewish Jerusalem inhabitants were under constant military pressure; the 2,500 Jews living in the Old City were victims of an Arab blockade that lasted five months before they were forced to surrender, on May 29, 1948. Prior to the surrender, and throughout the siege on Jerusalem, Jewish convoys tried to reach the city to alleviate the food shortage, which, by April, had become critical.

Meanwhile, the Arab forces, which had engaged in sporadic and unorganized ambushes since December 1947, began to make an organized attempt to cut off the highway linking Tel Aviv with Jerusalem – the only supply route to Jerusalem. The Arabs controlled several strategic vantage points, which overlooked the highway and enabled them to fire on the convoys trying to reach the sieged city with supplies. Deir Yassin was situated on a hill, about 2600 feet high, which commanded a wide view of the vicinity and was located less than a mile from the suburbs of Jerusalem.

On April 6, Operation Nachshon was launched to open the road to Jerusalem. The village of Deir Yassin was included on the list of Arab villages to be occupied as part of the operation.

According to Irgun’s leader Menachem Begin, the assault was carried out by 100 members of that organization; other authors say it was as many as 132 men from both groups, Lehi and Irgun. Begin stated that a small open truck fitted with a loudspeaker was driven to the entrance of the village before the attack and broadcast a warning to civilians to evacuate the area, which many did. Most writers say the warning was never issued because the truck with the loudspeaker rolled into a ditch before it could broadcast the warning. One of the fighters said, the ditch was filled in and the truck continued on to the village. “One of us called out on the loudspeaker in Arabic, telling the inhabitants to put down their weapons and flee. I don’t know if they heard, and I know these appeals had no effect.”

Contrary to revisionist histories that the town was filled with peaceful innocents, residents and foreign troops opened fire on the attackers. One fighter described his experience:

My unit stormed and passed the first row of houses. I was among the first to enter the village. There were a few other guys with me, each encouraging the other to advance. At the top of the street I saw a man in khaki clothing running ahead. I thought he was one of ours. I ran after him and told him, advance to that house.” Suddenly he turned around, aimed his rifle and shot. He was an Iraqi soldier. I was hit in the foot.

The battle was ferocious and took several hours, in part because the attackers were poorly trained, disorganized, lacked reliable intelligence, and had no idea what to do with prisoners. The Irgun suffered 41 casualties, including four dead. At least one member of Lehi (Amos Keinan) was killed by friendly fire. The larger number of Palestinian casualties was partly due to the method typically used to storm houses at that time, which was to first throw in a grenade. In some cases, housed collapsed on the residents.

The sum of dead was controversial. Each side told its troy differently with the Arabs using Deir Yassin as their base to tell the world the Jews massacred Arabs, leaving out the many massacres of Jews the Arabs conducted in the land, one is the 1929 massacre of Jews in Hebron.

In 2017, Israeli scholar Eliezer Tauber published an exhaustive study of the casualties and found that a total of 101 people were killed, 61 in combat (24 armed fighters and the rest family members who were with them); about 10 whose deaths are in a “grey zone” whose characterization can be debated; and 11 from a single family killed by a single Irgun member. The cause of death of another 18 could not be determined.

Here are the notations about the docufilm I jotted down during the screening:

1/ During the film they show one building blown up, assuming by Israel, as if there is no reason for this action but for unfairly attacking Arabs and their property. These pictures are part of the film’s general theme, portraying Israel as evil.

2/ The film accuses Jews of destroying Arab villages to confiscate Arab property and settle the land with Jews. That is inaccurate, bordering on lies.

3/ The film connects the suffering of the Jews in Europe as the reason for them to arrive in Israel and take the Arabs out of it. That is a lie. The idea was simple, Jews returning to their homeland of over 3000 years ago. It is obvious the Arabs would have preferred for the remnant of the Jews after the Holocaust to have stayed put in Europe.

4/ The film accuses Zionism of following the Europeans’ colonialism trend. The Jews “chose” to colonialize “Palestine.” That is an utter lie. The Jews returned to their homeland from which they were expelled by the Romans who conquered the land. This claim is a trope used much by the Arabs and their cohorts to depict the face of the Jews as ugly and Zionism as evil.

5/ Throughout the film they show the suffering faces of Arabs – women, children, and men – a deliberate and direct attempt to show similarity to the expressions of suffering on Jews’ faces during the Holocaust. There is an attempt here to depict Jews, victims of the Holocaust, perpetrating the same crimes on others.

A conflict is a war. In war, all those that partake in the fighting suffer, or are killed. What was on the mind of the Arabs, that the Jews would not fight back? But the film only speaks about the Arab victims. It is one-sided propaganda that achieves nothing, and its message is an ancient anti-Jewish/anti-Israel trope. But, the after-screening panel claimed there was no Antisemitism in the film. Anti-Israel is Antisemitism.

7/ The film accuses the Jews of ethnic cleansing. It is an utter lie. It also accuses the establishment of Israel on the back of the Arabs. That is another utter lie.

8/ The film gives a lame excuse as to why the Arabs rejected the UN partition resolution. The film claims that the partition did not allocate enough land for the Arabs. The truth is, the Arabs did not want and still do not want Israel to exist. They had a different plan: They did not accept the partition and wanted to go to war to gain all the land. How did that work for the Arabs and their sympathizers?

9/ The film accuses Israel of denying the Arabs human rights, Israel oppressing the “Palestinians.” The Israelis do not oppress the Arabs; they just take measures to protect themselves from one massacre after another had they put their guns down. This is always the case – accusing the Jews – when the case against Israel is based on lies and deception. The Arab sector in Israel has more human rights than they would have had if they lived in any Arab or Muslim country. Who is complaining? The anti-Semites? 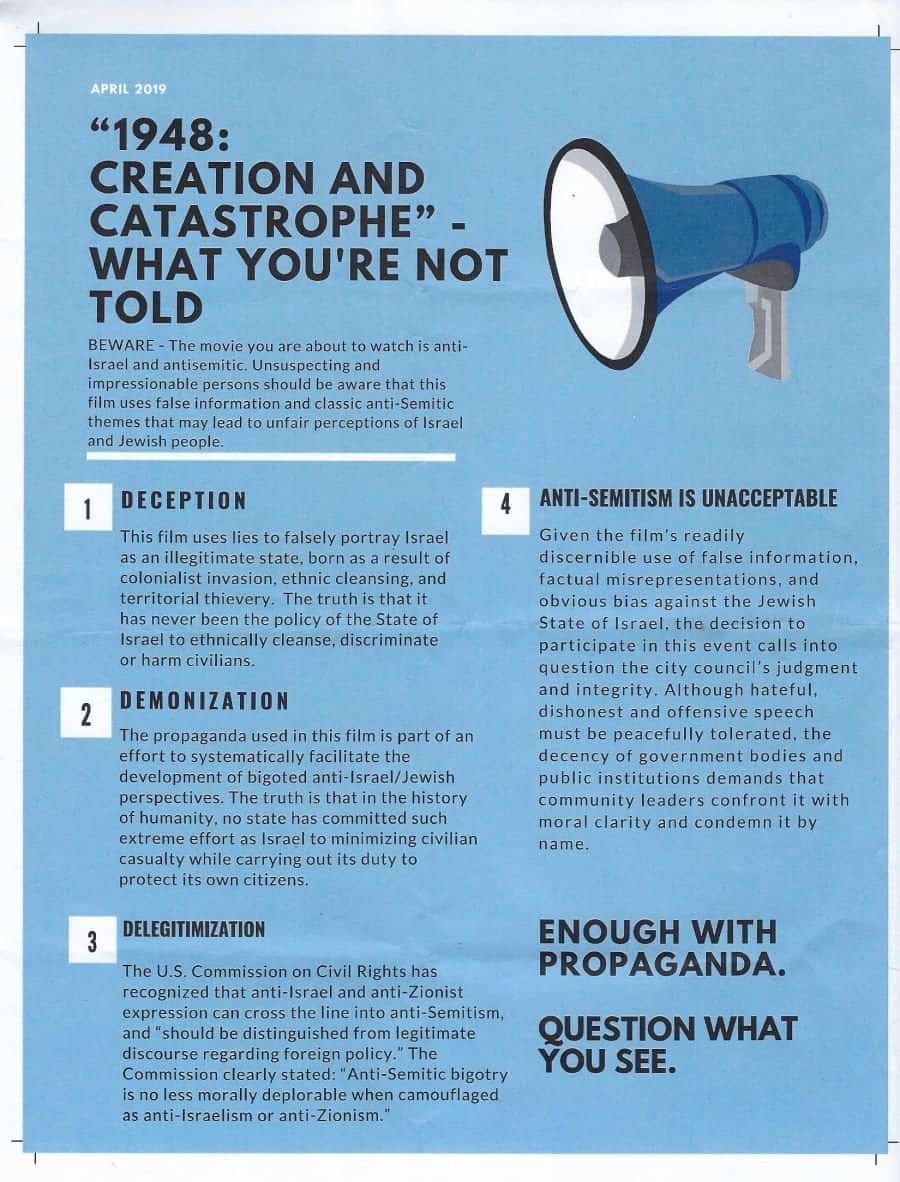 I shame the producers of this kind of docufim. They have to lie through their cinematography in a very boring and out-of-context kind of documentary film.