One of the interesting things about coping with a serious illness is the people that you meet on the journey of treatment and recovery. I have been blessed to have an Oncology Nurse, Robin Demboski, who has been a great source of strength during my battle with cancer. Robin also helps to run a permanent orphanage and clinic in Haiti in her spare time. So when the Haiti earthquake struck, Robin headed south to help her mission. A few days ago I received this email from Robin who had just returned to Tampa:

“I need your help to find a child I was caring for in Haiti. Last week I was in Haiti on a medical mission, and after a great deal of trouble, I arranged for a 3 month old, Christopher, to be airlifted to the Israeli medical mission because of hydrocephalus. That was the day before the Israeli mission closed, and I was told that the baby was transferred to the USNS Comfort, but I have not been able to confirm this. I am desperate. I took responsibility for this infant and I do not know what I can tell his mother. Is there any way to find out where Christopher is? I thank you in advance for anything you can do.” 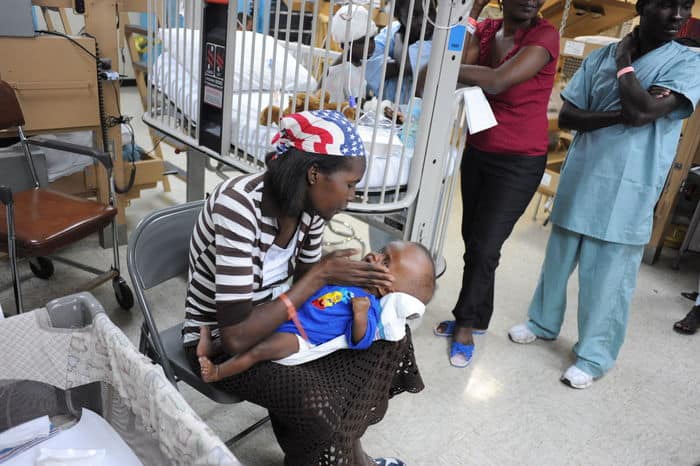 Robin contacted me because she knows I have background in Disaster and Humanitarian Relief efforts in Bangladesh, Rwanda and Katrina. So I initiated a series of emails to the various agencies and organizations that might be able to help locate Christopher. For a 24-hour period emails flew back and forth as more people became involved in the “full court press” to link up baby Christopher with his mother. By early morning on the day after we initiated the search we received an email from a representative on the USNS Comfort who had a “John Doe” baby in a forward medical bay who fitted the description of baby Christopher. Then a flurry of phone calls and emails set up a framework of positive ID of the 3 month old and a way to repatriate mother with baby.

But Robin was not doing all of this on her own. An important part of her team is a young man called Jeef. Jeef is a twenty three year old male Haitian who Robin met in Tampa through a church. He was in the US to study in a two year program because he was one of the smartest in his community. He earned a two year engineer degree while in the US only to go back to Haiti to help make changes for his community and country. He went back with the thought he could make a change in Haiti. Unable to get a job, he knew that Robin needed help with her mission and showed up to assist.

Robin was impressed with Jeef because of his willingness to do whatever needed to be done. Jeef is very street smart, knows the lingo and was able to get Robin into places other missionaries were not able to go. Jeef’s natural abilities made him a quick study for basic medical care during those times when Robin was back in Tampa. Jeef has learned many basic medical skills. His dream is to become a physician. He has saved many lives with what he already knows. He is able to speak English, French, Creole, and some Spanish. 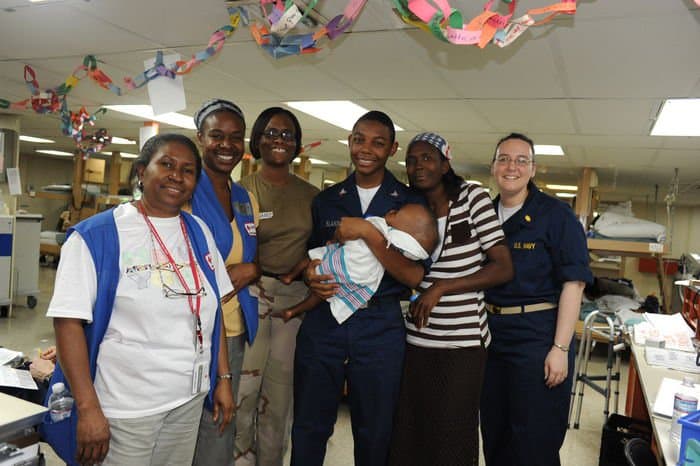 Robin will not travel anywhere without him in Haiti because Jeef is such a valuable resource. He is a courageous and determined young man whose dedication to his people and country is typified by his actions in helping Robin find Christopher. While Robin and Jeef worked hard to get baby Christopher to a Neuro-Surgeon in the Port Au Prince area, Jeef was struggling with malaria induced fever.

Robin tended to both Christopher and Jeef during the evacuation of the baby. Christopher was finally placed into the hands of the Israeli medical mission who later sent Christopher to the Comfort. This was when Robin lost contact with Christopher’s location and status. She also had to fight to get Jeef well and return to the mission. Jeef continued to assist Robin with her patients, despite running a high fever and suffering from headache, backache and knee pain. Then it was Robin’s time to leave Haiti and Jeef was in charge of the mission and finding Christopher.

Upon her return to Tampa, Robin worked the email and phone. Jeef was on the ground in Haiti with Christopher’s mother, Christine. He was able to calm and assure Christine that Christopher was safe and well and that she would soon be able to see her baby. After a few days of coordination and calls to the Comfort, Robin was able to declare success in finding Christopher. Photographs of the reunion on board the Comfort were sent out, as were thanks to all who helped. A special thanks to those agents at the US Immigration and Customs Enforcement who were on the ground in Haiti, standing by to conduct a search for little Christopher.

My final actions in this incredibly rewarding task were to post the photographs of the reunion on the Facebook Walls of Joint Task Force Haiti and the USNS Comfort. These American military folks are also real heroes out there saving lives and helping those in need. Letting them know that we appreciate their efforts is an important part of thanking our military for their dedication and commitment. I am proud to be an American!

As always, I leave you with an appropriate quote. This one is in honor of Robin’s efforts to find Christopher. As Eleanor Roosevelt once said:

A woman is like a tea bag – you can’t tell how strong she is until you put her in hot water.

US and Cuba Resume Embassy Operations

US Renews Call for Cuba to Release Alan Gross

US Strengthens Civil Society in Cuba