Tommy Fielding (Scott Porter) is a Wall Street whiz raking in big bucks at Morgan Brothers, a fictional investment bank with a name ostensibly inspired by a transparent contraction of Morgan Stanley and Lehman Brothers. Located in lower Manhattan, the company is an ethnically-diverse boys club where greed is good and misogyny reigns around the water cooler chatter. Setting the tone is his beautiful girlfriend (Alexis Bledel) Cash (Andrew McCarthy), a philandering, profit-oriented woman-hating he-man with a moniker about as subtle as the firm’s.

The Good Guy doesn’t offer much of a plot to sink your teeth into until the day one of Morgan Brothers’ rainmakers announces that he’s leaving to take a better offer from a competitor. At that juncture, Tommy taps computer geek Daniel Seaver (Bryan Greenberg) to fill the vacant position, even though he doesn’t have a background in finance or much in the way of or a magnetic personality. 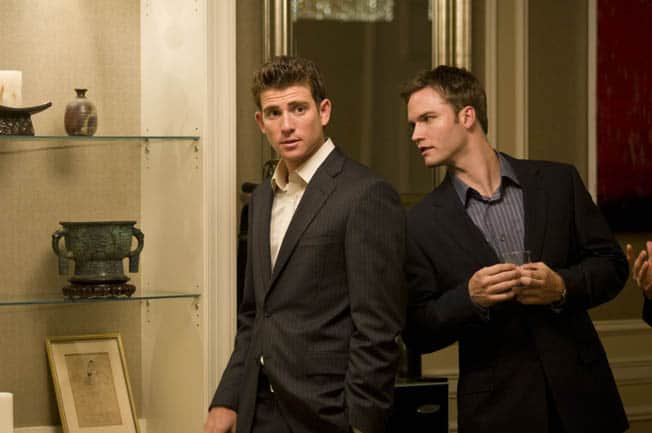 This ill-advised decision comes to take more of a toll on cocky Tommy’s social than professional life, after he encourages his nerdy new protege to hangout with his gorgeous, green girlfriend (Alexis Bledel). For Beth, a conservationist concerned about carbon footprints, has only been dating morally-bankrupt Tommy for a few months.

So, it doesn’t take much for relatively-sensitive Daniel to have her rethinking her relationship with a Neanderthal. First, he undergoes a Jerry Lewis/Jim Carrey comedy-quality transformation merely by removing his eyeglasses (ala the social zero makeover in your typical teensploit). He then proceeds to win her heart by contributing to the conversation at her women’s book club. Needless to say, a tawdry love triangle ensues, as clueless Tommy catches on too late to prevent complications. Which guy gets the girl?

Unfortunately, without any chemistry among the lead characters, you won’t care, as this insipid sitcom simply fails to engage the audience on an emotional level. And the crude humor isn’t reason enough to invest in this mirthless sitcom either, since the laughs are few and far between, if you know what I mean.

To see a trailer for The Good Guy, visit: