South Korea’s electoral body declared Moon Jae-in the new president of the country after garnering a majority of the votes against two rivals, conservative Hong Joon-pyo and centrist Ahn Cheol-soo.

The National Election Commission finished counting votes earlier on Wednesday and announced Moon obtained 41.08 percent of the votes, edging out his closest challenger, Hong Joon-pyo, who gathered 24 percent of the votes. Centrist Ahn Cheol-soo, a strong contender as well, came third with 21.4%.

Around 64 percent of the country’s 42.4 million registered voters cast their ballots as of 3 p.m. Tuesday. The poll closed at 8 p.m. Waiting for the results usually take hours before the declaration of a winner. However, exit poll results showed a favorable edge for Moon’s camp. Based on a poll conducted by South Korea’s three major television stations shows, Moon was winning with 41.4 percent of the votes cast in Tuesday’s election.

US Congratulates The New President

“We congratulate President-elect Moon Jae-in and join the people of South Korea in celebrating their peaceful, democratic transition of power,” press secretary Sean Spicer said in a statement.

The White House press secretary noted that Trump’s administration looks forward to working with Moon in a united effort to “to continue to strengthen the alliance” between the two countries.

US and South Korea are key allies working together on some major global issues including denuclearization of North Korea.

Moon Jae-in was born on 24 January 1953. Moon, 64, was formerly a human rights lawyer. The current 12th president was a prominent opposition leader in South Korea since 2015. The new leader was the son of North Korean refugees who made a name for his liberal views including his advocacy for greater dialogue with North Korea.

Moon is married to Kim Jong-suk, a vocalist from the same university as him. They have two children. 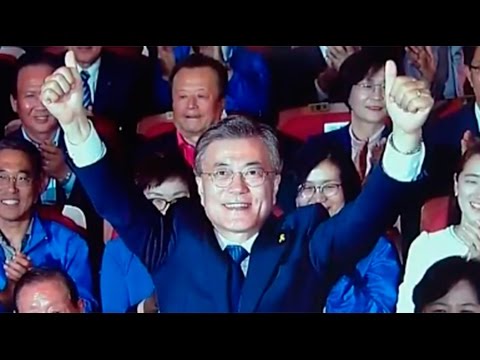