The White Star Youth association which runs the Learning Support Centres in Tottenham and Wood Green and the Lordship Rec FC whose U-12 Somali boys won this year’s children’s football tournament in London, has organized a colourful achievement award ceremony which intended to encourage young boys and girls who gained GCSE A and A Star in English, Math and science in their school year examinations in the UK.

In one respect the ceremony was mainly to award the youngsters and in the other respect, it was intended to mark on the Haringay-based Lordship Rec FC’s annual club presentation, an event which is observed in every year in a bid to have a look at the club’s progress and achievements reached in the past year. The colourful ceremony attracted over a hundred participants including, professors, former Somali players of different sport, the boss of Somali sports community in UK, intellectuals, African Zone 5 basketball marketing commissioner, representatives from some key sporting federations in Somalia, parents, school teachers, coaches and other honourable guests.

Mr. Felix Waterhouse, who first addressed at the ceremony said that something very unique has been accomplished since the establishment of the two Learning Support Centres in Tottenham and Wood Green administered by the White Star youth association which not only teaches the children, but also educates them under football and other sporting programs which he said were very useful for the children. “This is really a wonderful and very exciting congregation, it is very amazing that for the past three years these children have been taught different subjects which lead some of them to be part of the top level students who gained the GCSE A and A Star levels in the school year examinations in UK” said Mr. Felix Waterhouse who is the group’s educational coordinator.

“What we are witnessing here today is a very clear testimony for the tangible results after the launch of the successful endeavour by the White Star youth Association just three years ago-the outcome is that our students have gained top results from this year’s school examinations plus the victories these youngsters scored during past football tournaments” Mr. Felix Waterhouse told the gathering which was held at White Hart Lane Sports Community Centre over the weekend.

He said that the children were very praiseworthy for their practicing the lessons they have been taught at both the Tottenham and Wood Green learning support centres during the school year examinations. “We have seen some incredible changes since the White Star youth Association started educating the children in football and then taught them their basic knowledge-we are really very proud of these children and the great success that has been achieved so far” added Mrs. Louise Torres-Ryan who is one of the teachers during her briefed remarks at Saturday’s achievement award ceremony. 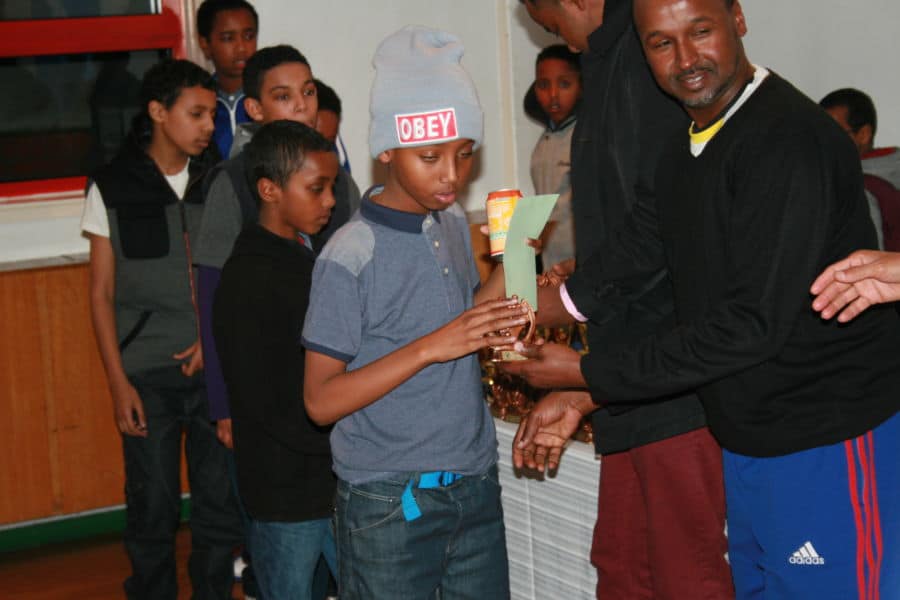 “It really cheers me and I cannot guess how happy I am to be present at such very lovely achievement award ceremony which is to encourage a number of well educated children” noted Dr. Hussein Diriye Afrah who started his work as a tutor in Somalia in 1959 and was one of Somalia’s most renowned university professors before the collapse of the horn of African country.

“I praise Abdi Olad Rage and his group of school teachers and football coaches for thinking to take such move which can be described as a kind of protecting Somali children from being involved in crimes – you are really doing a very historic thing for the whole Somalia as you are educating these children who are expected to be our future leaders” Dr. Afrah told the ceremony over the weekend. 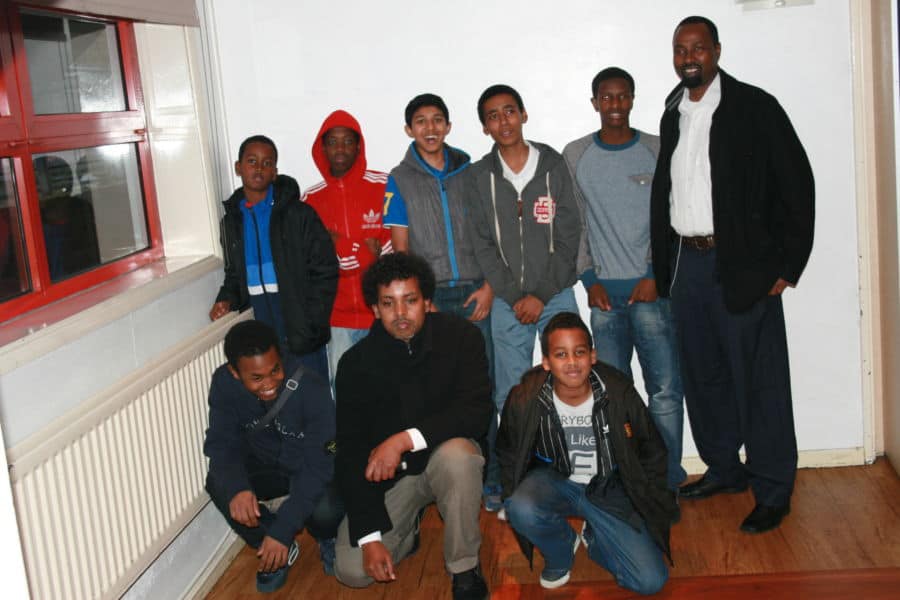 In what has been seen as the most spiritual speech during the congregation Mr. Abdi Qasim Mohamed Hassan, whose four children attend the one of the learning support centres displayed the certificates of his children who GCSE A and A Star in UK this year.

“My Four children were among the best students in the United Kingdom – this great victory has really been reached with the joint efforts by the White Star Youth Association chairman Abdi Olad Rage and the teachers who work with him” the happy father Abdi Qasim Mohamed Hassan told the ceremony over the weekend.

For his part Professor Mohamed Moalim Marooko noted that his previous thoughts and what he witnessed during the congregation were totally different saying that an unprecedented and very huge task has been done.

“Knowledge is very important in our lives in this world and even here after – the first word of the holly Quran which was revealed into our prophet Mohamed peace and mercy be upon him was (read) and it shows that knowledge is a key part of our lives and we cannot do without it” professor Mohamed Moalim indicated adding that the teachers were implementing such message.

“We see the western nations are fully developed and that is because of the industrial revolutions in the west were based on education, so looking for knowledge is very necessary as it finally leads you to progress and civilization in the world” professor Mohamed Moalim emphasized.

Mrs. Safiyo Ahmed who was honoured to address at the ceremony on behalf of the mothers whose children were being awarded said she was very happy that their children were given all possible assistances which lead them to culminate in such high levels in UK’s school examinations of the year. 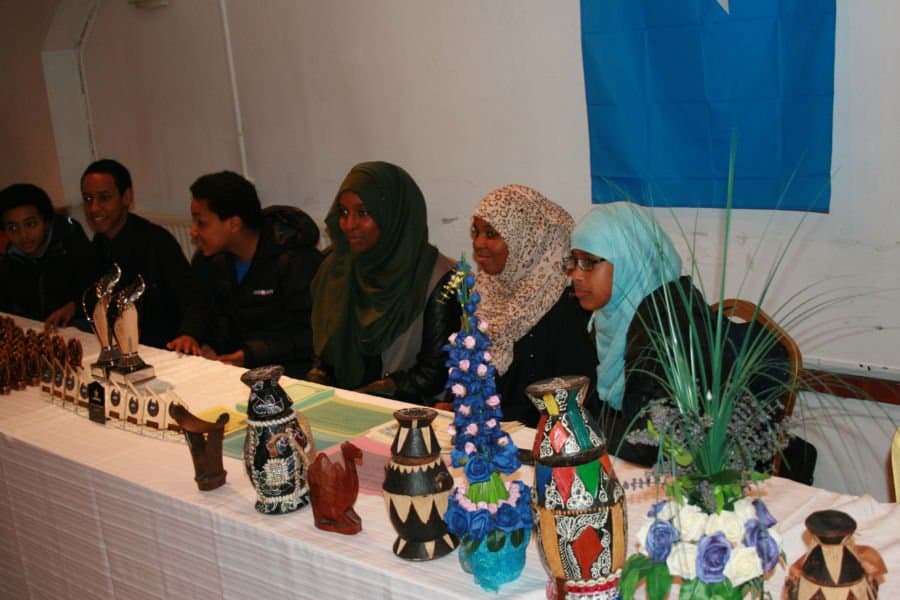 “We see that our children have now a very bright future in both their normal education and football, we can understand the huge efforts and energy spent by Abdi Olad Rage and his colleague teachers and coaches – we hope that in the near future they will also be able to give mothers a chance to study” Mrs. Safiyo Ahmed told the ceremony on behalf of the mothers” committee.

Mrs. Federica Nardella, one of the teachers who educated the children said that the relationship between students and their teachers was all about an exchange of knowledge and experience praising her students for being committed to their lessons, a real commitment which she said was the main cause for the students to gain top marks in the examinations.

“I am so proud of you (students), keep learning, keep improving look at where you were three years ago and where you are now-also imagine where you will be tomorrow” Mrs. Federica Nardella said directing her message to the students.

Former director general of Somalia’s sports development institute before Somalia fell into anarchy Professor Mohamed Ali Addow who delivered a short speech at the Saturday’s achievement award ceremony added that the successes scored by the children during the school year examination was a clear example for the mutual comprehension and cooperation between them and their tutors.

“For the past several years, the White Star youth Association crossed the borders by sending some young and talented boys to join Somalia’s football team and they so far represented their nation in international competitions-on behalf of Somali basketball Federation I praise Abdi Olad Rage and his group of coaches for the great role they are playing in Somali sport in general and in particularly their event, the football” Mrs. Hawa Sheik Ahmed Taako, Somali basketball Federation deputy president for international relations told the ceremony.

Mrs. Hawa Sheik Ahmed Taako who is respected amongst Somalis as the mother of Somali sport was elected to the position in mid this year, a development that Somali people described was a “sing” for the revival of Somalia’s lost basketball dignity.

One of the most prominent campaigners for the development of Somali Sports Mr. Mohamed Isse Digeeye who witnessed the launching ceremony of the White Star youth Association several years ago, briefed Saturday’s achievement award ceremony about the youth and sports association, its history and its activities in the short period it existed.

“I was present at the establishment of this initiative several years ago, when you make comparison between the few years this association existed and the uncountable things they achieved, it will come to you as a surprise and unbelievable, but it really moved forward and that was because of the joint work done by the teachers, football coaches and parents” Digeeye told the ceremony. 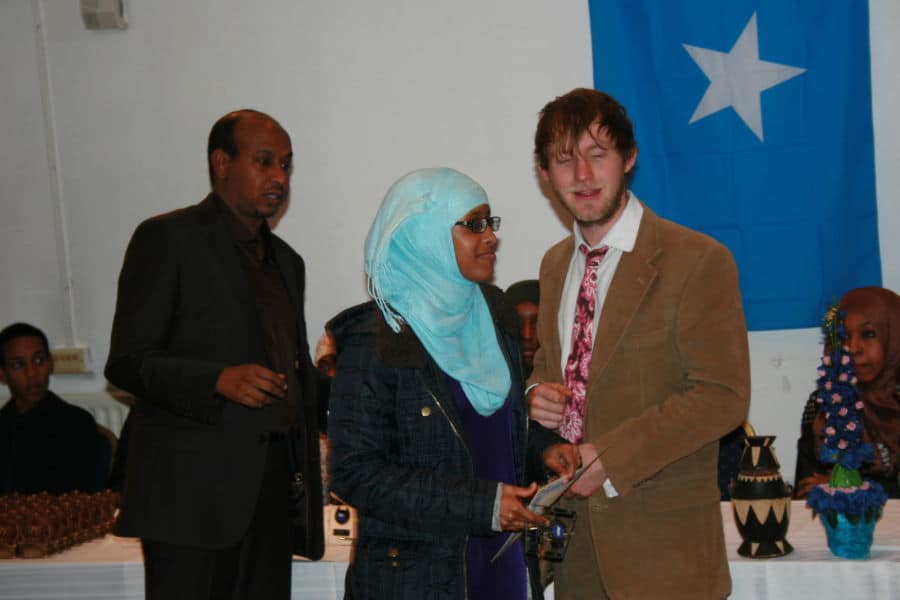 However, Saturday’s achievement award ceremony which was the biggest of its kind ever held in London by a Somali-owned youth and sporting association in UK was concluded with the speech by the founder of White Star youth association and Somali Football Federation administrative representative in Uk Dr. Abdi Olad Rage who first thanked all those in the attendance for spending their expensive time to come and see the result of the huge tasks they have been doing for the past several years.

“On the behalf of White Star youth association and the two learning support centres we run, I pledge here in front of you that we will redouble our efforts and will do every possible attempts in our utmost until we shall realise our dreams which include to see these children becoming future teachers whilst we are very hopeful that some of them who are talented in football will represent Somalia in future international competitions” the founder Dr. Abdi Olad Rage told the ceremony before he announced the conclusion of the congregation which gathered over two hundred participants.

Dr. Rage added that the White Star Youth Association is a community group which was formed 5 years ago from the strong social ties and connections between Haringey’s Somali community.

In the early years, we ran a football club – Lordship Rec F.C. which started its life as just one team but has since grown to 8, including a girls’ team. We realised through our close interactions with young people from this area that many were struggling in school and were lacking in confidence and self-worth as a result.

“With having this in mind, we then set up Educational Support outside School Hours covering Maths and English and science tuition based around the curriculum and supporting young people to get up to speed with their classmates. It is worth noting that the majority of the young people we provide sports activities and Outside School Hours club for are of Somali origin, we are open to anyone and are trying to reach out to diversify our take-up” Dr Rage added.

“The White Star Youth Association is part of a pilot project called Sporteducate which funded by Deutsche Bank in partnership with Sported foundation. The Sported Foundation is national organisation that helps young people through the sport and it had so far helped us to grow from the very bottom since we start providing our sports activities” Dr. Rage said in his closing remarks at the ceremony.

Four organisations were selected throughout the great London to be part of this sportseducate pilot project which helps young players to improve their education in schools and get better educational achievements. The White star youth Association has so far been recognized by the North London communities as a “positive” association which helped so many young boys and girls to achieve top marks during their examinations in both 2012 and 2013 school years.