At the Security Council meeeting on Somalia, Mr. Dunn stressed that the U.S. government commends Secretary General’s report on the ongoing work of UNODC and UNDP towards establishing courts in Puntland and Somaliland, within existing authorities.

With UN assistance, trials in Somaliland and Puntland are expected to reach international standards, thus permitting transfer of suspects to Somalia for prosecution within three years. -Mr. Dunn

He said significantly enhanced prison capacity, also to international standards, is expected in two years. He believed that building on the ongoing efforts in Somalia along these lines may be the most effective and efficient way to help meet the Lang report’s goal of a “Somalitization” of the anti-piracy effort. 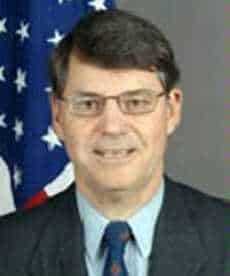 According to Mr. Dunn, it is clear that an extraterritorial Somali piracy court is not a viable option, due to opposition to the idea from Somalia itself and the host of constitutional, procedural, security, financial and logistical issues identified in the report. He added that the Somali authorities have been clear that they do not support this idea, as confirmed in the OLA report.

“We must address the urgent need to establish a reliable venue in the region for the prosecution of suspected pirates captured by international naval forces.” -Mr. Dunn

Mr. Dunn noted that United States supports the establishment of a dedicated piracy chamber or court in one or more regional states. He added that with adequate international support, it could be established almost immediately in one of several states in the region that already has a robust piracy law in place.

He stated that Seychelles has offered to host a regional prosecution center, given sufficient prison capacity to imprison convicted pirates.

“We must not forget that incarceration is perhaps the most significant constraint on piracy prosecutions. In this regard, the United States urges Puntland and Somaliland to pass any necessary prisoner transfer legislation and we agree that if the international community will invest in the construction and rehabilitation of prisons in these regions, convicted Somali pirates could be housed, humanely and securely, in such facilities.” -Mr. Dunn

Mr. Dunn underscored that the United States is committed to pursuing the means to disrupt the pirate enterprise ashore, including by tracking illicit financial flows in an effort to identify and prosecute the organizers and financiers of piracy.