The Somali National Olympic committee has commenced a special program that aims to normalize the living atmosphere of the draught-displaced people of Mogadishu IDP camps with the assistance from Qatar charity and the UK-based Kit Aid.

The program was carried out at the Qatar village IDP camp near stadium Mogadishu over the weekend where hundreds of young boys and unde age children were distributed with sports uniforms in a bid to make them happy.

Somali National Olympic committee first vice president and Qatar Charity country director for Somalia Duran Ahmed Farah told the participants that the program was meant to cheer the draught-displaced children and show them that they can live the kind of normal life that indigenous people in their areas are hoping for.

“These people were displaced by draughts and famine from their regions. So after they have been given something to eat, we want them to normalize their lives through sport and the second step will open educational centers at the camps as well. This will not be confined only to this camp, but we intend to reach other camps,” the Somali NOC first vice president and head of international relations Duran Ahmed Farah told the audience.

“We want to make them feel that they have a normal life. Now, we have encouraged only the boys, but we expect to get suitable sporting attire for the girls who told us that they also wanted to play the sport,” the NOC senior vice president noted.

Madino Nur Madey, a mother of five children who traveled more than two hundred kilometers to reach Mogadishu in search of something to eat said that she is happy. She forgot all hardships she experienced after she witnessed her two sons performing well during a football match for children at the Qatar Village camp. 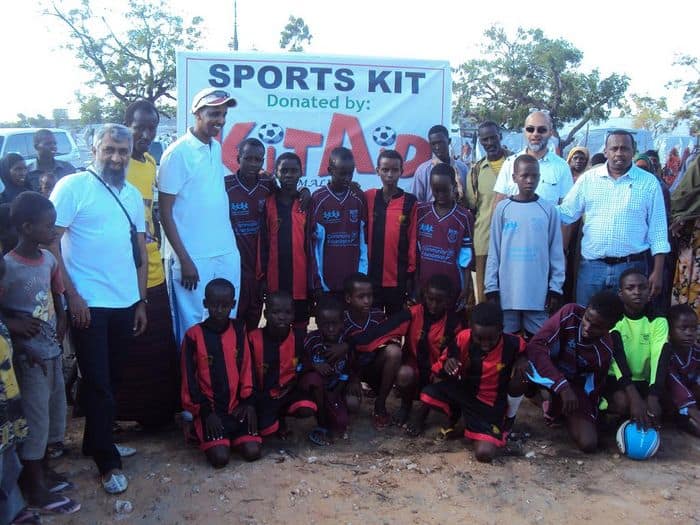 “I have never dreamt like this experience. My two sons have played well and one of them was awarded with a beautiful medal for being the best player in the competition. This will be something to talk a lot in the future,” the cheerful mother told a gathering.

Shukri Maadey, a 15 year old girl at the camp hoped that the Somali NOC would give them sporting equipment because she said they wanted to play sport themselves as well.

“We also want to play sports and we are waiting for them to happen,” the 15 year old girl told Somali NOC senior vice president Duran Ahemd Farah on behalf of her colleagues at the camp.

“The Kit Aid is the biggest charity which supplies sporting equipment to some African countries and in Somalia,” Saneey announced.

However after the distribution of the equipment there was a football match held for two teams of children at the Qatar village IDP camp. The match attracted officials from Somali NOC, Qatar charity, Kit Aid and hundreds of the draught-displaced people at the camp.