With fervor and joy Somalis welcome Winner of this year’s Alternative Nobel Peace Prize Asha Haji Elmi Awarded by Rights Livelihood. In the Google search engine Asha Haji Elmi is described as being an activist internationally acknowledged for her fight against Female Genital Mutilation in Somalia and other areas of Africa. She frequently travels to college campuses and universities around the world giving speeches about the political conditions in Somalia, FGM and the resulting effects on Somali women. 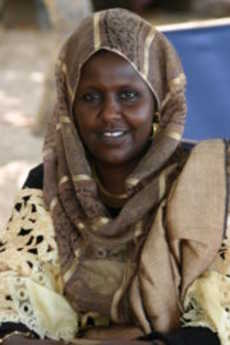 The first time I saw this wonderful lady was in the summer of 1999 at a meeting held inside the Nairobi UN compound, Gigiri where Somali intellectuals and politicians gathered to discuss about peace for Somalia. What struck me most was her charm and charisma to boldly come out and speak with a voice of courage and integrity by calling spade a spade.

As usual there were more men than women in that room but numerical superiority did not put any barriers on her way nor stop her from focusing her point with clarity of vision and purpose. She had crashed the iron gates of timidity, quite often implicated, on low judgment standards though, with genuine feminine qualities.

Among those I remember in that meeting were prof. Gandi and Mohamed Guled of ex-Somali Airlines. Asha has appeared in the specter of fame during the peace talks of Arta Djibouti when she declared that she has no tribe but originates from a clan called womenhood. Though she has had a longstanding experience in the academic and social spheres, Asha did not have much political exposure before the Arta talks. 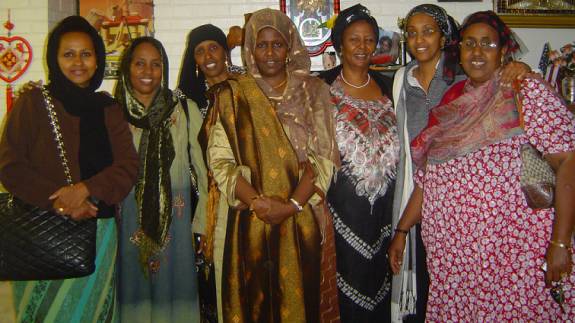 That was where she had departed from to embark on a long journey of securing a fair share of parliamentary seats for women in the Arta talks. Despite unprecedented political difficulties women have received a better status in Arta than ever in the Somali reconciliation conferences that had preceded the Arta talks. But Asha was still not satisfied with the way women were treated. She wanted justice for all regardless of gender. In the Embagathi peace talks, women faced a much tougher challenge as this time it was the warlords who were in charge, unlike Arta when civil society had been more visible in the conference.

The status of women as ordinary citizens has come under stiff challenges, let alone becoming MP’s or political figures with a descent portfolio. They were denied access to the seats allocated for them in the constitution because warlords wanted to grab all seats for themselves with the blessing of IGAD.

They knew if women came upon the scene there would be a dramatic shift to the side of peace which obviously would work against their sinister intentions to sell out the nation. That was why they were trying hard to undermine women’s role in the nation’s political life. But Asha again rose with undminished strength and courage to organize all somali women in the conference under the banner of “The Sixth Clan,” to spearhead a new form of struggle without yielding to intimidations and threats geared against them as a measure to destroy their initiative and credibility.

They were brave women. They just went on and fought. But still Asha was not satisfied. She fell out with the TFG to join the opposition while skillfully balancing her political career and gender rights activism.

Not only that but Asha has been a champion for the women’s movement against injustices and abuses inflicted upon young girls in the name of culture such as Female Genital Mutilation. Being a founder of one of the most active women organizations in Somalia, Save the Somali Women and Children SSWC, Asha has not spared her time and effort to become a voice for the somali women victimized by famine and protracted civil conflict over a period of two decades. In general such kinds of harassment, marginalization and denial of women’s rights have links with culture, not religion as some people like to put it. They are deeply woven within the fabric of customary and traditional norms of life in Somalia.

Women are not a gender of a lesser degree or status. They are as capable as any man in the sphere of politics and leadership. In the army they can soldier with the same efficiency as men or much better. When this madness ends and a government is set up, Somalia will need military women pilots, women lawyers, women doctors, women teachers etc. Without women in their rightful place how can a nation survive? The era of discrimination is gone, never to come back. We need a new nation. We need a new Somalia where men and women work side by side on equal basis. We need to have a nation bound together by a thread of respect and tolerance.

Let us applaud Asha H. Elmi for being a winner of the Rights Livelihood Peace Award. It is a victory for all Somali women wherever they are as she stated in her interview with the international media. Our sister is a star in the sky of hope and I humbly say to her “Further ahead rise please.” I dedicate this poem to Asha and all the women of Somalia:

Women Are a Strength to Build

Women are a strength to build

They are a force to produce

No one can ignore their role

They must be given a chance

Women are strength to build

We need them to be in politics

We need them to represent us

We need them to be in history

It is their right to become leaders

It is their right to run this nation

It is their right to fight injustices

It is their right to seek equality

Women are a strength to build

They are a force to produce

No one can ignore their role

They must be given a chance