In the attachment you can find

The Somali minister’s letter sent to IOC, the Somali NOC president photo, the IOC’s reaction letter and the picture of the minister addressing at Somali NOC annual general assembly in January this year

The Somali National Olympic committee has on Sunday angrily reacted to the Country’s youth and sports minister Abdi-Nur Mo’alim Mahmoud who said in a letter sent to IOC late last month that there was corruption within the Somali NOC and there was no cooperation between the NOC and its member federations. 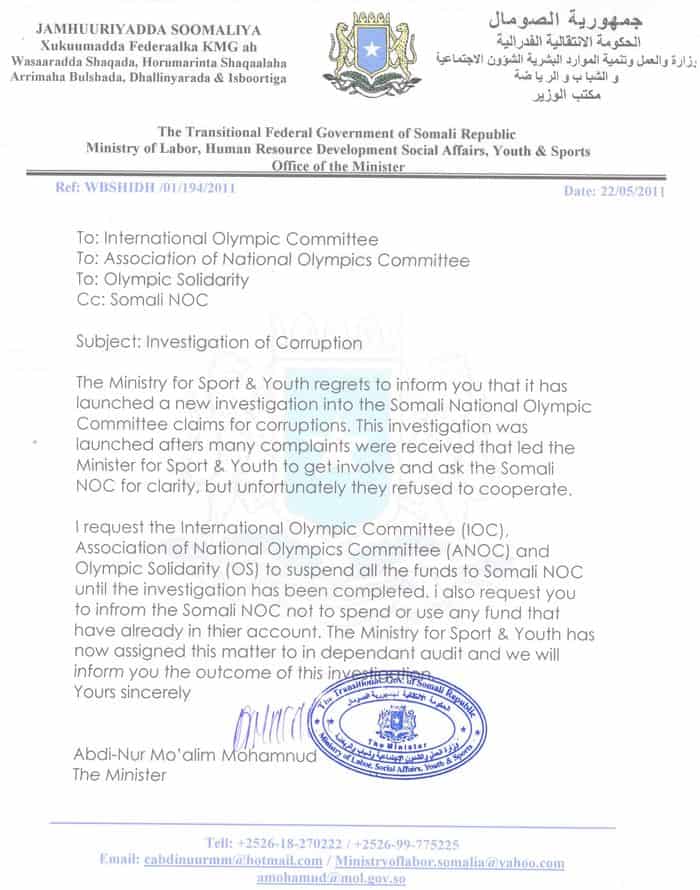 In a press statement issued here on Sunday, the Somali National Olympic committee president Aden Hajji Yeberow told the minister to know his duties and stop interfering in the NOC and its member federations which have been working in the lawless country for the past twenty years.

He said that Somali Olympic committee is always committed to welcoming and working with every appointed minister for sport and that the NOC and its member federations always fully cooperated with the previous sports ministers.

“As we dealt with all ministers before him, as soon as the current sports minister was appointed the Somali NOC gave him a full report about the activities by the NOC and its member federations for the past twenty years of lack of a functioning central administration in the country” the Somali NOC president said in his statement.

The statement said that in his early months of the job, the minister was invited to the Somali NOC annual general assembly held in **Mogadishu** on 2-3 January this year and during the congress the minister was given a complete report on what has been achieved by the NOC and the hardships that it experienced in the past. 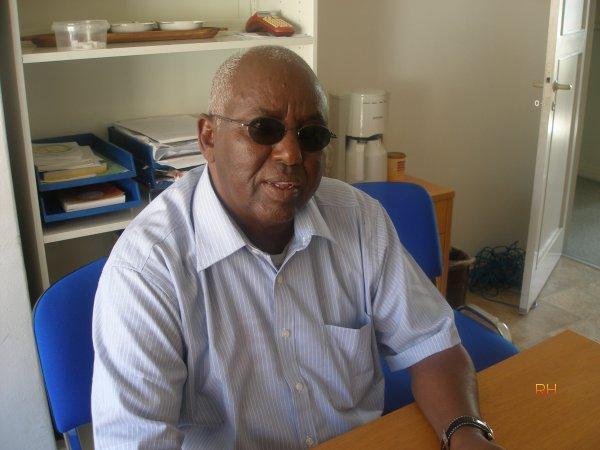 “We always invite officials from the sports ministry to the beginning and the closing ceremonies of all activities, such as competitions, workshops and courses held in and outside Somalia where the dignitaries from the Somali sports ministry always praised the NOC and its member federations for their positive activities” the NOC president said adding that in the last step the deputy sports minister Ali Sheik Abdullahi Afgoye was honored to close a FIFA level course for Somali football caches in Djibouti on 9th of June 2011.

“The letter that our sports minister Abdi-Nur Mo’alim Mahmoud sent to IOC became a very surprising matter to us and it was something that we never expected from such person who embraced a national responsibility-we urge the minister to faithfully work with the NOC as he previously pledged in front of public” the Somali NOC president said in his statement adding that the sports minister must know his duties.

He accused the minister of committing a crime against the development of Somali sports saying that the NOC expects form his for apology.

“I know that the NOC and its federations are very important for the Somali people, because you have guided uncountable number of youths from bad habits they were involved like taking part in civil wars or drug abuse and we want you to redouble such good work” the minister told the Somali NOC general assembly on January 3rd 2011.