The Somali Football Federation has successfully concluded the district level soccer for peace tournament in Mogadishu on Friday afternoon with Darkeynley district team winning the trophy after defeating Yaqshid district rivals by 1-0 in the final match.

Dharkeynley’s 17 year-old striker Abdulkadir Mohamed Hassan scored the lone goal from a free kick in the 25th minute of the first half of the match which attracted. Fifty-thousand spectators came to wintness the competitive match. The spectators include president of the Somali republic Sheik Sharif Sheik Ahmed, minister of sports Mohamed Mohyaddin Sheik and Somali Football Federation president Said Mahmoud Nur. 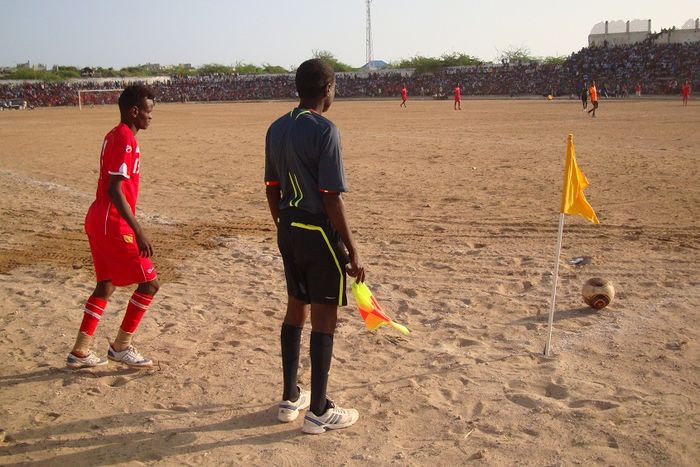 A dozen of other government ministers, parliamentarians and the mayor of Somali Capital also watche the final match.

Nearly ten thousand fans returned from the entrance gate of the stadium. There were no empty seats at the stadium as hundreds of spectators were sitting on the walls, while more others climbed over nearby buildings to watch the match.

Somali President Sheik Sharif Sheik Ahmed commended the Somali Football federation for successfully organizing the event. He stated he was amazed by the the large number of people to witness the game.

“I praise the Somali football Federation for the great role it has played in the restoration of peace and public integration through football for peace matches,” the president said in his closing address on Friday adding that football is powerful and can play a larger role in promoting peace. 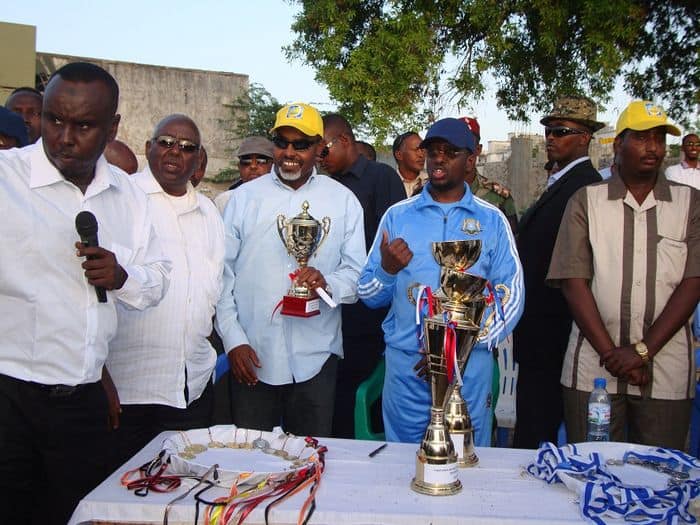 “For the next tournament, we hope from the Somali Football Federation to invite us to this stadium with an artificial football turf,” the president said.

He added that last night’s condolence letter from FIFA president Joseph S. Blatter shows that the world football family is always on Somalia’s side. 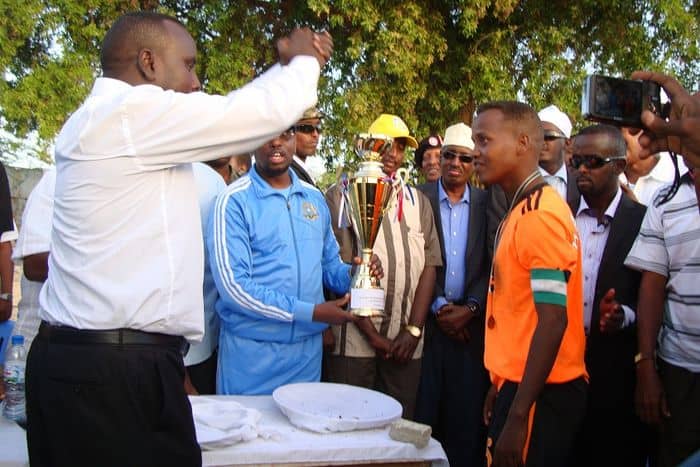 “I am congratulating you on your victory in the tournament. This is the award you deserved after a marathon struggle for the past 12 days. I hope that you and your team members and all fans will happily sleep tonight,” the president told Dharkeynley district team captain as he was presenting the trophy to him. 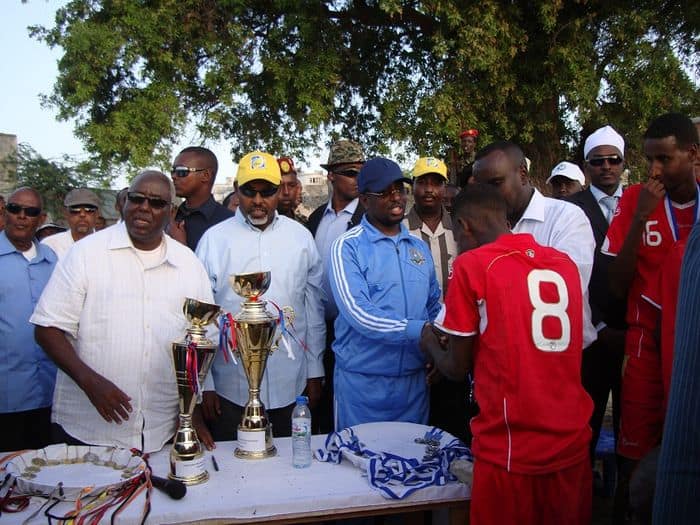 Meanwhile, Somali Football Federation media department praised the media outlets who gave much time to cover the football for peace tournament since it started in Mogadishu on December 18.

“Our particular thanks to the Nairobi-based Bar-kulan radio and Radio &TV Shabelle in Mogadishu for their live coverage. They are the real partners of Somali Football Federation and we are very grateful to them for the good job they did for the past 12 days,” the SFF media department said in a statement. 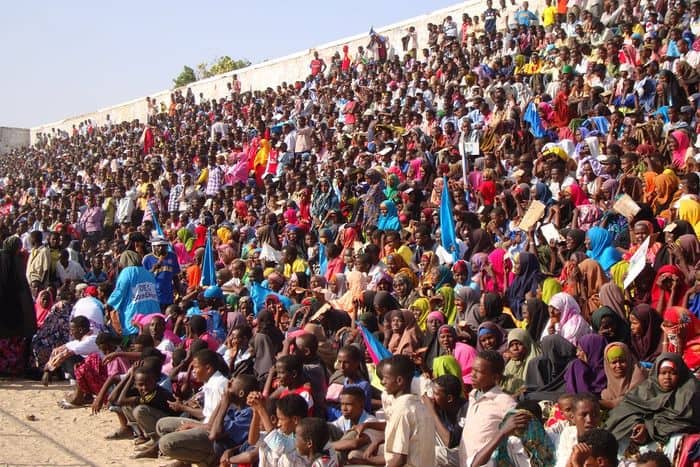 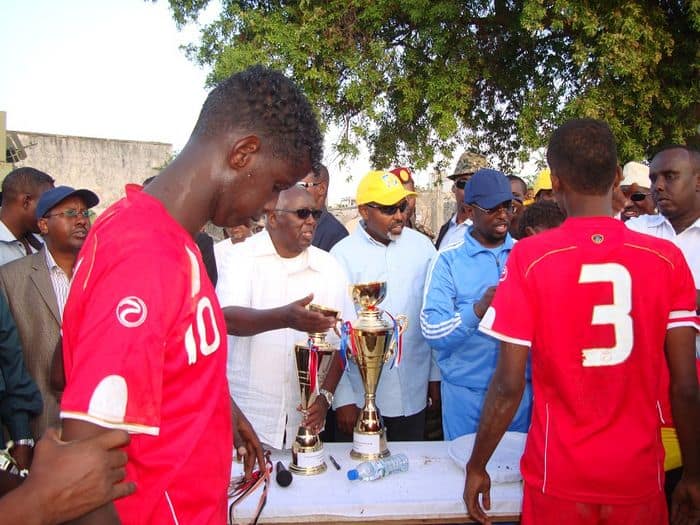 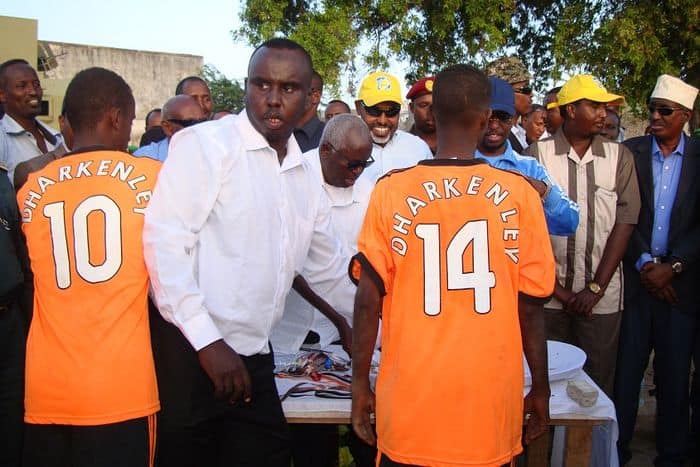 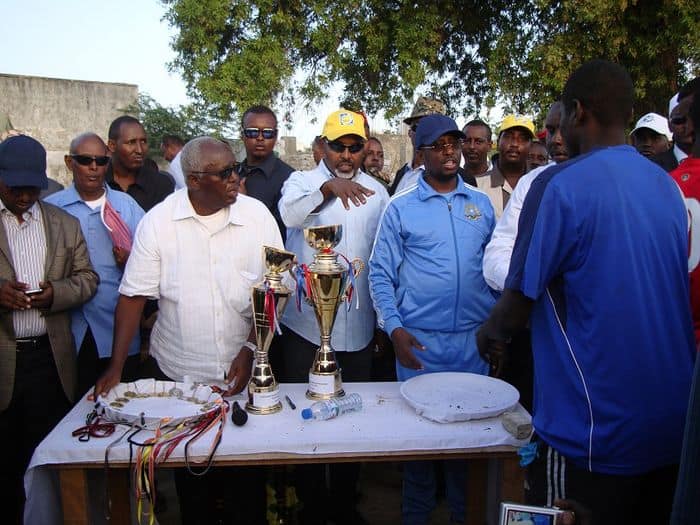 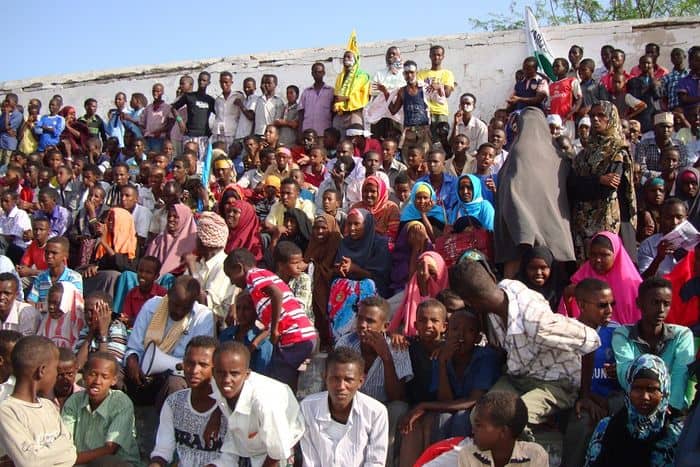 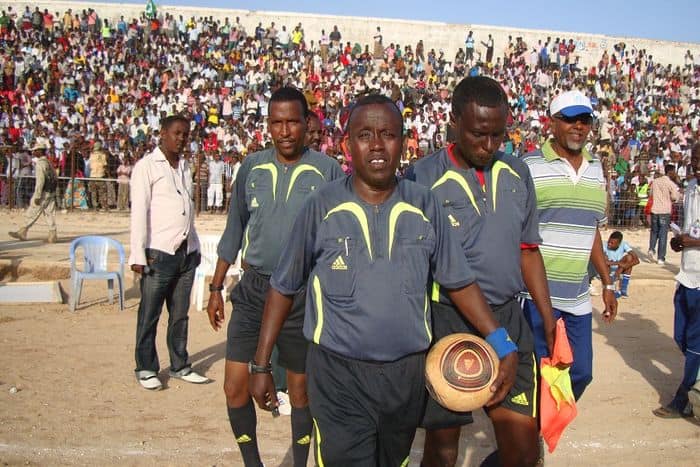 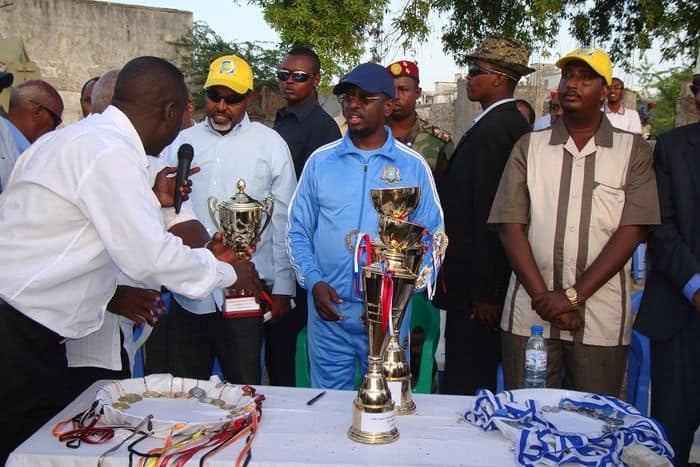 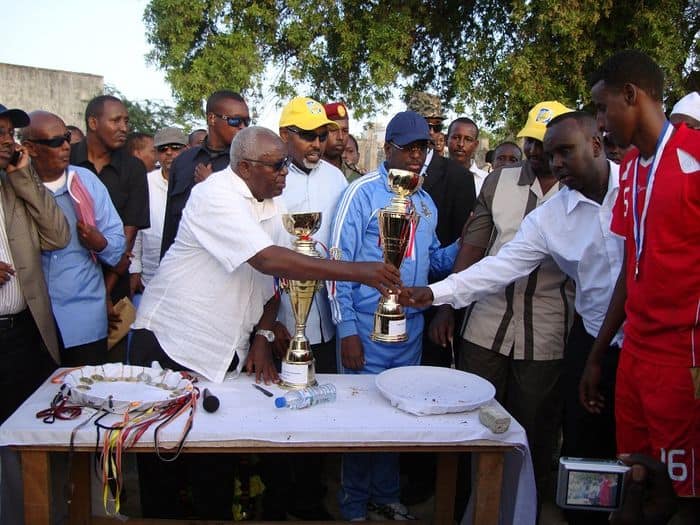 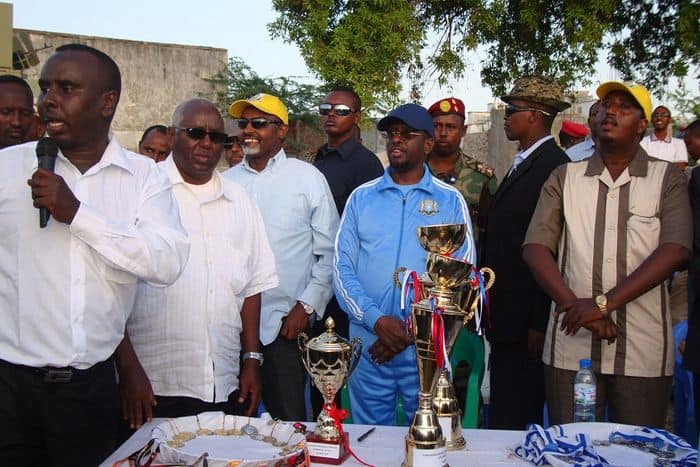 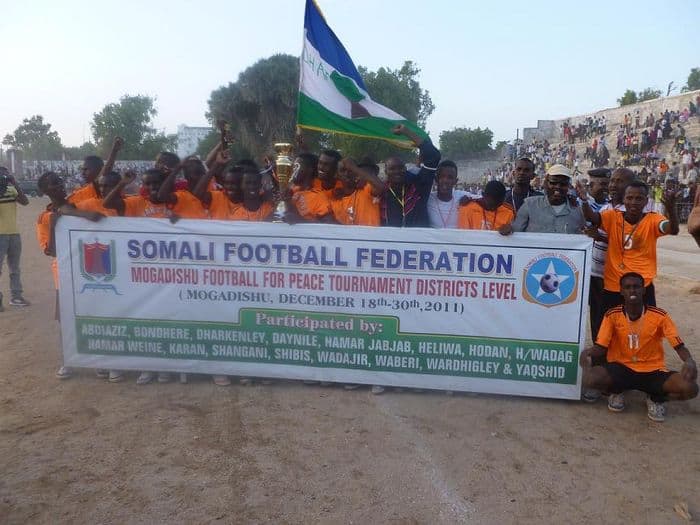 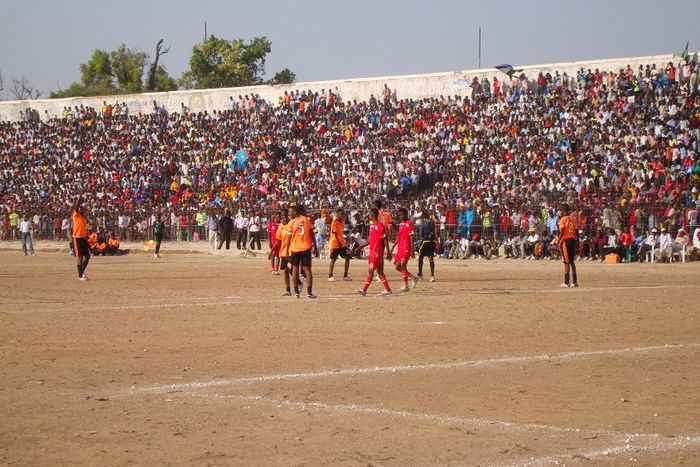 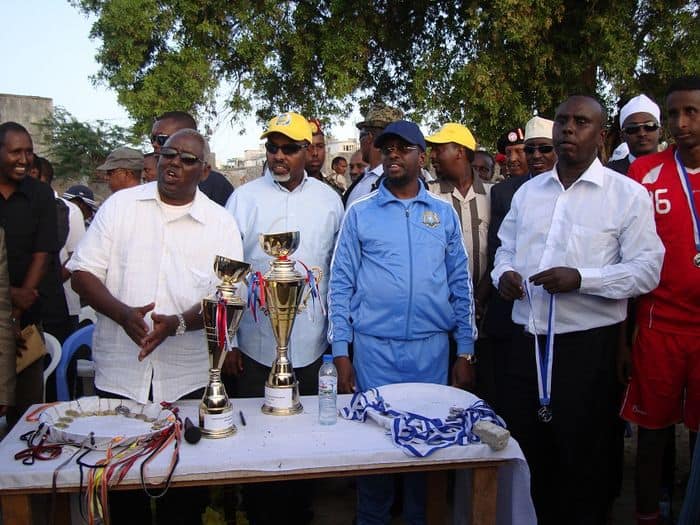 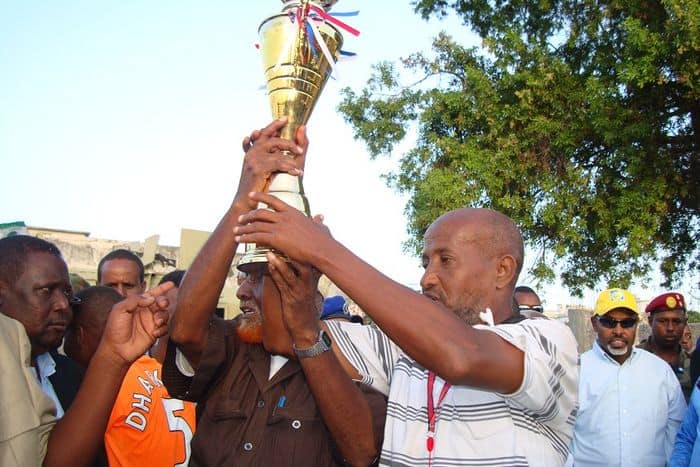 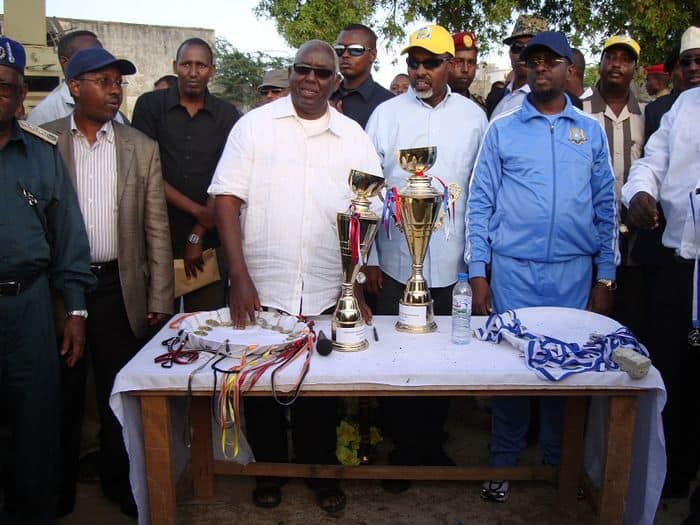