Scores of Somali intellectuals, educators, business experts and leaders from Somali-owned community organizations based in the UK are visiting London for an historic conference.

Reports say the Conference will discuss the development of Somali economy under the title ‘OPEN FOR BUSINESS’ in the West Minister on Monday next week, according a press statement from the conference organizers.

Organized by the United Nations Associations the conference which is the first of its kind ever held in the United Kingdom is slated for Monday December 10 and will run from 10:000 AM to 17:00PM, according to the chairman of white Star Youth Association Dr. Abdi Olad Rage and Ahmed Hersi who chair the World G18 Somali both members of the conference organizers. 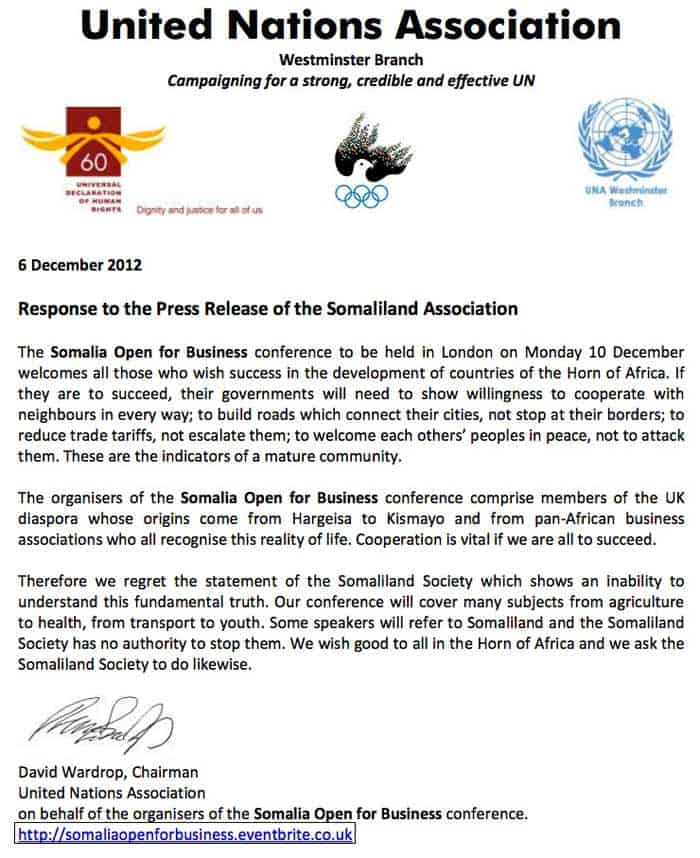 “This will be a big chance for Somalia, because the day-long conference is very important for the country in terms of encouraging economical boost up in Somalia. The conference will gather all those who wish to bring economic development to our country,” Dr. Rage and Hersi said in a press statement adding that participants are representing the entire Somali people from Hargeisa to the southern edge of the country bordering with Kenya.

The statement noted that the conference will address 7 more agendas which are very important for the development of the economic sector of a country which is currently recovering from what has been described as one of the most notorious civil wars and terrorism in the world for the past two decades.

The conference agendas include:

The statement said Mr. Hugh Scott, Director of Africa Enterprise Challenge Fund will be leading dozens of speakers at the one-day conference which is mainly intended to encourage the growth of economy and development in the war-weary horn of African country.