Somalia’s IFIYE center celebrates two important occasions this month. On the four year anniversary of its establishment and the first anniversary the center set up its own Base and Library in Mogadishu.

Since the outbreak of the civil war in 1988 and the subsequent collapse of the central government in 1991, all public social services in Somalia were severely disrupted. The education system, the culture, heritage, museums, and the intellectual publication of most of the government institution in Somalia were entirely destroyed.

IFIYE center was founded in June 2013 by young Somali graduates from local universities who were passionate about the art of reading, writing, culture and heritage.

At the time, there was no library [public or private], or any activity that was primarily related to advance the culture of reading, creative writing and literature. Most of the people were not even aware of the significance of reviving Somali literature and culture.

The center brought together a number of authors, social activists, young entrepreneurs, scholars, rectors of the main Universities in Mogadishu and Musicians to show that the center can restore the stunning image and the positive side of Somalia and change the narrative of Mogadishu and the country at large. 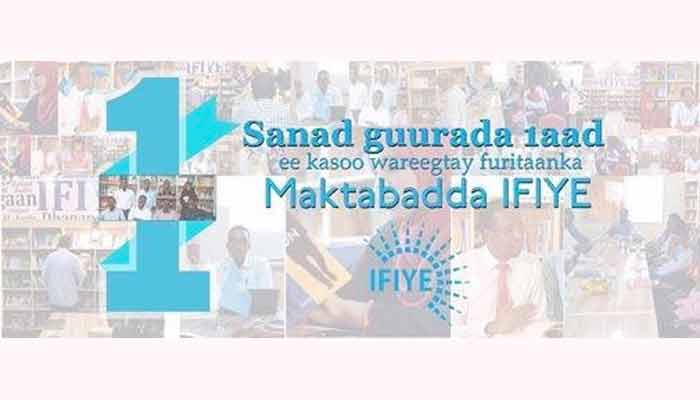 In order to change the ideological perspective of the current generation and the eloquent waffle of many people, IFIYE promotes the culture of reading and creative writing in Somali speaking society, with particular focus on youth. In addition, it promotes and distributes high quality Somali literature content (research, essays, history, fiction, science, poetry, drama and literature ); and provides young people with access to the cultures of the world by conducting reading clubs, debates, knowledge based events, poetry recitals, photography exhibition, guest lectures, traditional dance performance and translation of the renowned classical literature into Somali.

IFIYE’s main goal is to value and preserve Somali traditional wisdom including Somali literature, indigenous science, traditional games, language and all other forms of art of human expression in the form of the written word. Somalis are traditionally an oral society, and their culture is profoundly animated by the spoken word, and the highest art of Somali culture is poetry, which is a literary form produced with performance.

Moreover, the organization set up its own center in June last year located at Zoobe in Hodan District Mogadishu, Somalia. The center is equipped with a collection of arts that the center receives either from its members or allies in other provinces. It also buys some others from the market since it aims to create an environment whereby youth of today can witness the richness of their culture and see the broader civilization of Somali history and culture.

Additionally, the center opened the first Public Library in Mogadishu, which is the only library situated in the South Central area of Somalia. As Caitlin Moran once said “A library in the middle of a community is a cross between an emergency exit, a life raft,and a festival. They are cathedrals of the mind; hospitals of the soul; theme parks of the imagination.”

Furthermore, there is a digitization project, which the center is undertaking for the collection of books. This means that the library won’t just be a physical one, but many more Somalis will probably be able to access the literature in the center online irrespective of where they are.

Moreover, the center is currently running a Ramadan-themed campaign that celebrates the holy month from the perspective of Somali culture, using Somali literature or music, storytelling and well respected religious figures in Somalia.

Last year alone, the center conducted seven huge knowledge based events, with different themes, eight debates, two book forums, three Public talking and youth programmes, all aimed to integrate the youth that are living in various regions of the country. Thus, it can dispel the negative impression and the stereotypes about the plight of Somalia and step on the plate of coming together and contribute to rebuilding of the country.

Finally, as a society we need to wake up, share insightful ideas, debate the matters that are affecting us the most and work on the well-being of our society. As Raif Badawi said, “society needs to open its collective mind to all ideas and ideologies. It needs to give its people the chance to listen to the opinions of others. And then examine them critically instead of rejecting them prematurely. Such a creative dialogue based on positive critical thinking can enhance and develop ideas.”