The Kenyan U 20 football squad coach, whose team is currently participating in the 2010 CECAFA U-20 development and friendship tournament in Asmara, has vowed that his young boys will defeat Somalia in revenge for the Somali U 17 team’s humiliation of its Kenyan counterpart earlier in the year. 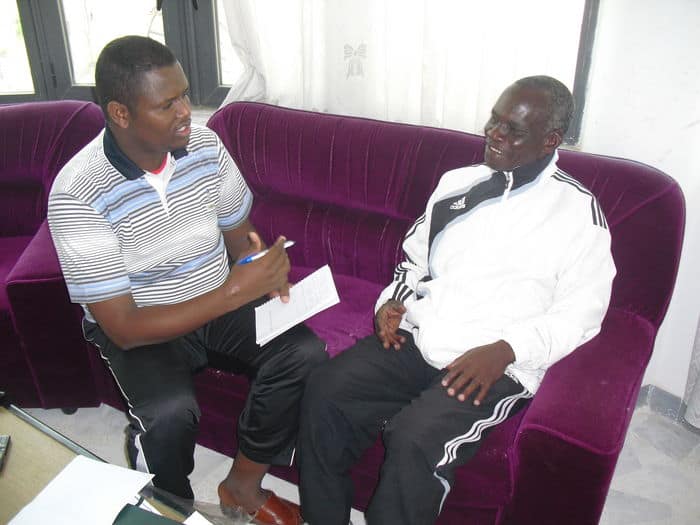 Q: Mr. Coach, there are nine different national teams including some that are very strong who are similarly chasing the trophy of this tournament, so what is your hope of winning it?

A: We have very high hopes indeed and I believe we shall win it easily.

Q: Do you mean that your boys have fully prepared to leave with the trophy?

A: Probably yes, and I hope this trophy will be in Nairobi.

Q: Your first match against Sudan ended in equality, 2-2, and we know that you defeated the Sudanese U 20 twice in less than three weeks a month ago, both at home and away, so what is the setback you are now facing?

A: Yes that is right, but it is very difficulty to beat a team three consecutive times, so it is not easy for a third time, as you know the first time we defeated them 2-0 in Sudan and 1-0 at home, so they have made more preparations to hold their heads up from the ground.

Q: As we know one of your best players was suspended from the match by your administration and that is because of impoliteness as I heard, so can we say this has had an impact on your boys?

A: Absolutely not, it is me who suspended him and he is now back – you will see him playing very soon.

Q: Why he was suspended the first time, I mean what mistake did he do?

A: That is something confidential to me and he is now pardoned.

Q: The last time that Kenya won the CECAFA U 20 was in 1999 and the senior challenge cup in 2002, so what do you think has been holding Kenya from being victorious during this long period?

A: It is right, we haven’t won for a long time and that is because our teams have not been prepared well, but at the moment we are fully prepared and we have very high hopes.

Q: How long have you been preparing these young boys?

A: they have been under going successive training sessions from the fifth of July this year.

Q: So do you think that this time of preparation is enough to you to win the tournament?

A: Yes, and we have very talented players who are committed to defending Kenya’s flag and publicity.

Q: But Teams like Somalia who humiliated your U-17 earlier this year are in group A with you, so do you think that you will be able to qualify from your group?

A: Somalia! They beat our U-17 and eliminated from the CAF youth championships qualifying match, so at this time we have prepared for them and we must beat them in revenge for their humiliation against Kenya’s U-17.

Q: Do you mean that you want to kick Somalia out of this tournament?

A: We have prepared very well and we shall beat them badly! And also my boys are saying they will retaliate against Somalia for the past loss.

Q: Since your young boys humiliated Sudan last month in the first leg of CAF U-20 qualifying match and you are now to play against Lesotho, do you have hopes of passing from this second round to the 2011 CAF U-20 title which will be held in Libya?

A: In fact we are using this CECAFA tournament as preparation to the Lesotho match, only what we are doing here is to test what we have been doing in the past, and we are hoping to beat Lesotho at least 3-0 and I hope my boys will be in Libya next year for the final round of CAF U-20.

Q: Finally Mr. Coach you have participated in many CECAFA tourneys and this is the first time that CECAFA is holding matches here in Eritrea, so can you please compare what you have met in Eritrea and your former thoughts of this small east African country?

A: Eritrea’s preparations for hosting this tournament were very high, I witnessed the opening ceremony – they made a lot of effort to make things go smoothly so that the tournament is now going on well.