As the new president of Djibouti Football Federation, the newly elected Souleiman Hassan Waberi on Sunday presided a colourful ceremony which intended to mark the conclusion of the country’s division A, B and C local football leagues.

Sunday’s closing ceremony gathered the biggest number of participants at a football congregation in recent years including sports minister Dr. Jama Elmi Okieh, members of the Djibouti FA executive committee, sponsor companies and organizations, referees, top level players, the chairpersons of the 58 football clubs in the country and local and international media. 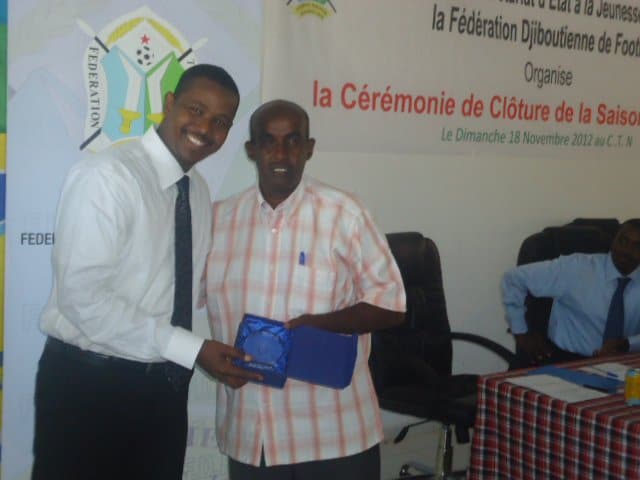 During the ceremony, trophies, medals of different categories and certificates were presented to the clubs who won the three divisions, best players, top scorers and organizations who sponsor a number of football clubs in the country.

In his closing address president Souleiman Hassan Waberi said he was very grateful to 12 local organizations including companies and government institutions for their efforts to help the rise of football in the small horn African country. Those organizations and companies include Djibouti Telecom, Tadjourah, the Port of Djibouti and the republican guards who themselves sponsor a big football club in the country. 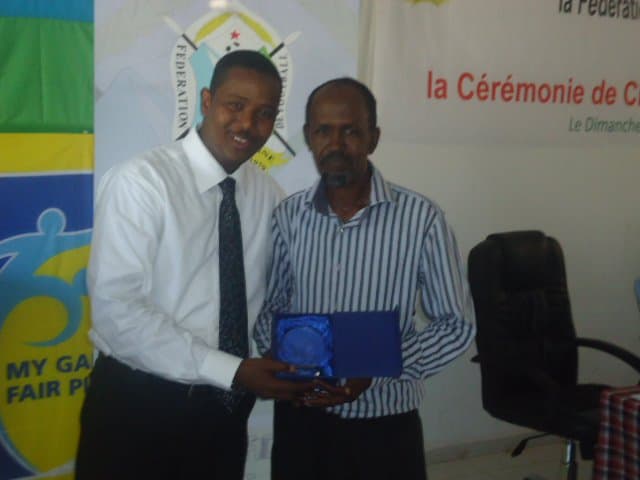 “Today it is a very great pleasure for me as president to present honour certificates and gold medals to these companies here for their involvement in our local football leagues who without their help wouldn’t have reached such progress. I urge them to continue their sponsorships to the league which I hope will increase the football culture in Djibouti,” president Souleiman Hassan Waberi told Sunday’s closing ceremony.

He said the closing ceremony was to be held several months before, but was postponed because of the Djibouti FA has no definite leadership since June this year. 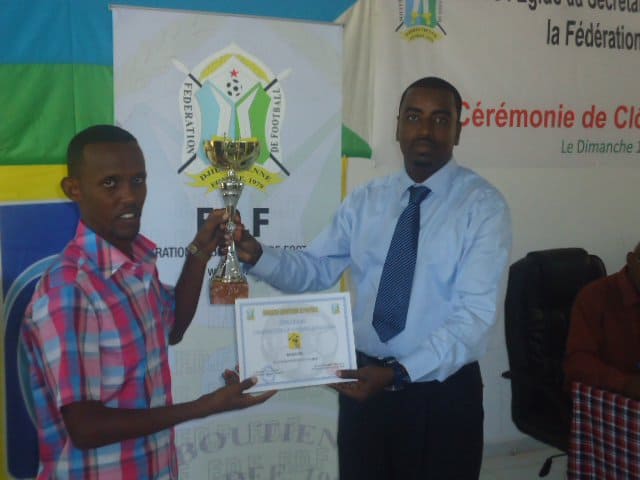 The president thanked the Djibouti Minister for youth and Sports Dr. Jama Elmi Okieh for his role in the progress of sports in Djibouti in all and in particular the football which is he said was the minister’s hobby.

“Dear Mr. Minister today I am very proud to present you this medal of honour which is the highest medal that the Djibouti Football Federation gives. I hereby declare that you deserve such high level medal for your commitment to football in our country,” president Souleiman Hassan said as he was presenting the medal to the minister Dr. Jama Elmi Okieh. 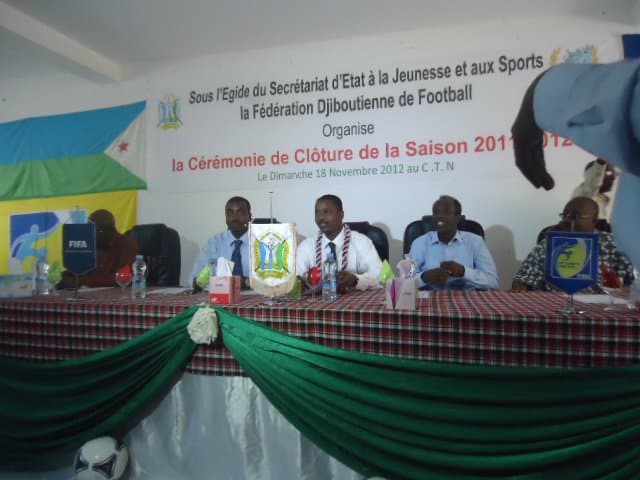 The minister for his part thanked the recently-elected president Souleiman Hassaan Waberi for his past activities in the premonition of football in Djibouti.

“As a minister for youth and sports, I declare that the ministry will closely be working with the country’s sporting organizations of which football is the most influential,” sports minister Dr. Jama Elmk Okieh told Sunday’s closing ceremony. 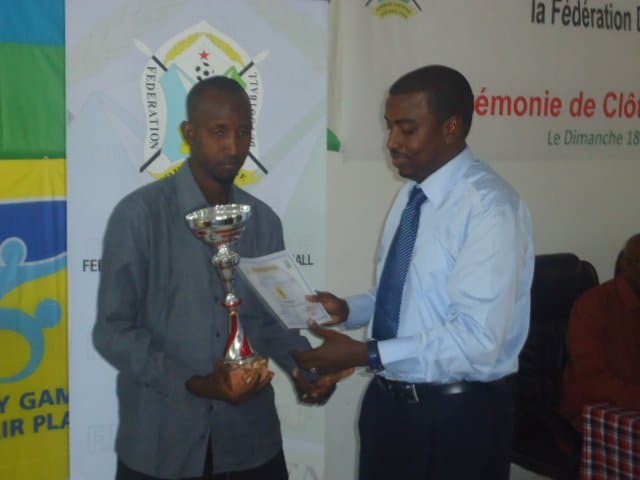 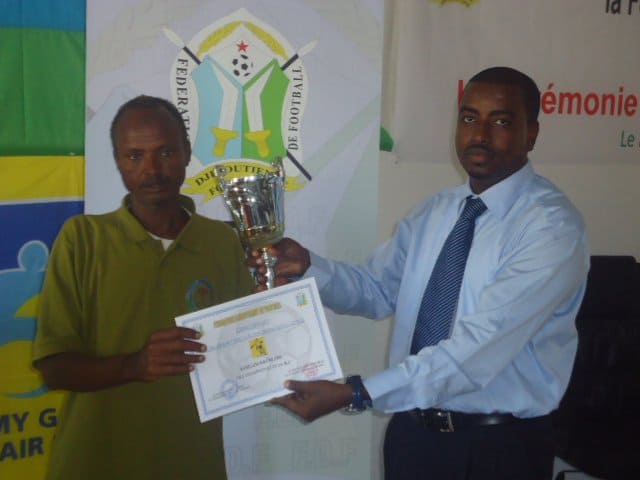 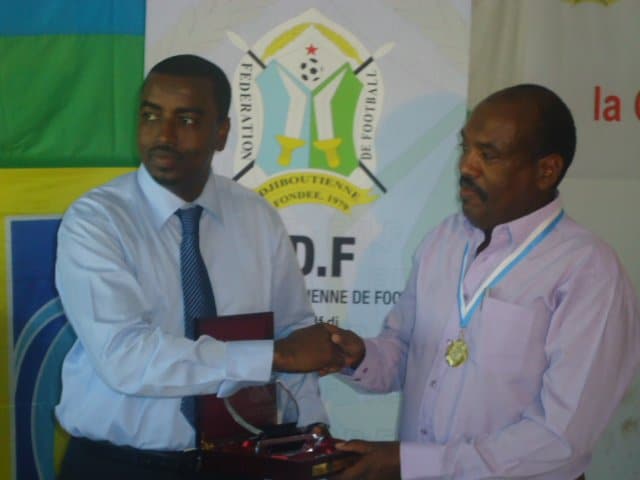 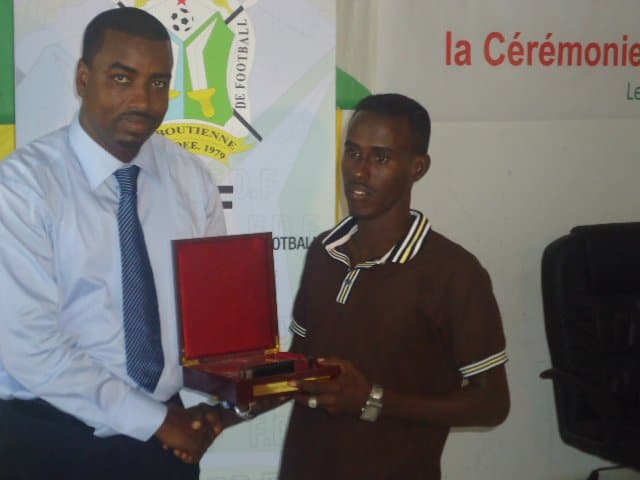 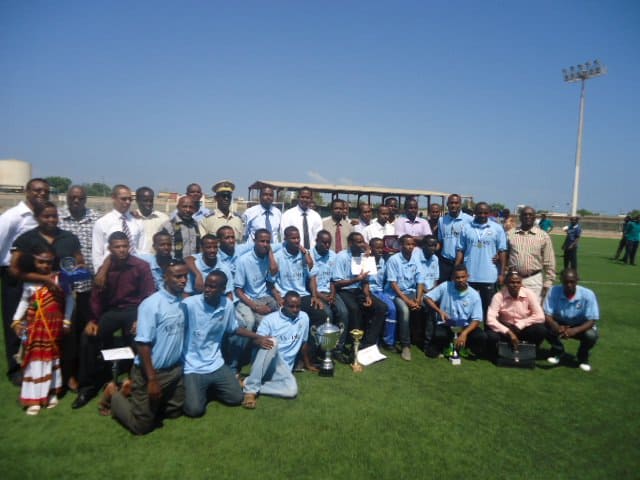