As part of his efforts of promoting smooth football in his country, the President of Djiboutian Football Federation Mr. Souleiman Hassan Waberi has signed a historic agreement with the country’s main insurance firm the GXA which will insure football players of different categories and all soccer volunteers across the country.

The signing ceremony of the historic agreement took place at the Sheraton hotel in Djibouti on Sunday evening in the presence, of high profile officials from the ministry of sport, football club chairmen, referees, the country’s top footballers and other honourable guests. 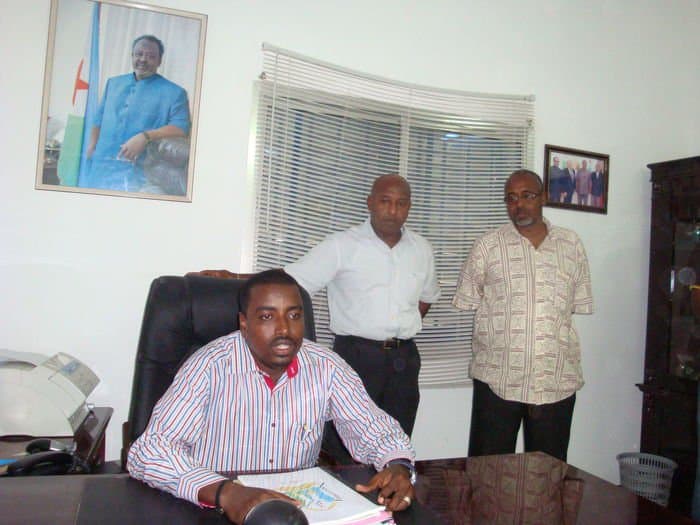 The historic insurance agreement is the first ever of its kind to be in place in Djibouti and it coincides with just less than three months after the FIFA and CAF commissioner Mr. Souleiman Hassan waberi was elected to lead the country’s football association on the 10th of November last year.

The young age president who has in the past been the most active individual in his country’s football association, earlier pledged to gather all his efforts in the promotion of football in Djibouti in particularly the women’s football, grassroots development and reviving the country’s regional tournaments.

Below is The President’s Address At Last Night’s Ceremony to Announce The Historic Agreement.

The Secretary of State for youth sports, Mr. Sales Manager Representative Insurance GXA Presidents of Clubs, Distinguished guests, Ladies and gentlemen, Good evening Let me first of all welcome you in this solemn moment when we come together to sign this historic agreement with the insurer GXA, I feel a great pride and satisfaction shared with all members of the football family and especially the primary responsibility of the players that is to say, the presidents of the clubs that were sometimes exposed to prosecution for failing to ensure their players involved in different categories of the championship.

This contract signing promote the emergence of a shared vision of football development and professionalization of management players. We are aware that sports insurance is an important factor in the quality of play as this motivates players to gain confidence and had.

This project respond to the vision of HE ISMAEL OMAR GUELLEH president of the republic in its roadmap has given priority to youth and sports. Starting today teams 1st, 2nd, 3rd division, Women’s Football, referees and the Cadets will be covered by insurance!

My fellow club presidents, (I) By raising the regional leagues we have contributed to the development of football, which is a central point of my program.

(Ii) With the signing of this partnership agreement with GXA is another important part of the structuring of the federation as mentioned in my roadmap. I will not forget all the support SEJS with whom we work in an atmosphere of trust and mutual respect. Finally, the last word to the insurer GXA that giving us preferential conditions showed great sportsmanship. On behalf of the entire football family I would reiterate our gratitude.

Thank you all for your attention Long life the Republic of Djibouti Up with the Djibouti football family.