The Andy Warhol Museum, one of the Carnegie Museums of Pittsburgh, celebrated what would have been Andy’s 85th birthday this past August 6th. Through September 15th, the museum is showcasing Genesis Breyer P-Orridge: S/HE IS HER/E, the artist’s first solo exhibition. From the Andy Warhol museum website: Her singular and, at times, provocative creative practice has exerted a profound influence on visual artists and musicians alike. Genesis has performed in a number of music projects including Throbbing Gristle, Psychic TV and Pigface.

A central focus for the exhibition is the Pandrogyne project a complex and highly ambitious series of collaborative artworks by P-Orridge and his wife Lady Jaye Breyer P-Orridge (1969-2007). Frustrated by what they considered to be socially imposed limits on personal identity and on the language of true love, P-Orridge and Lady Jaye sought to merge their two identities, using plastic surgery, hormone therapy, cross-dressing, and altered behavior to create the pandrogynous being, “Breyer P-Orridge.” An act of love, the work explores how fully two people can integrate their lives, bodies, and consciousnesses. Lady Jaye passed away in 2007, and the project continues with Genesis embodying the entirety of Breyer P-Orridge. Read more at: warhol.org

Andy, of course, is well known for his phrase, “Fifteen minutes of fame,” as well as his iconic works including portraits of Marylin Monroe and Elizabeth Taylor, as well as his Campbell’s Soup among more. The full quote, that everybody will be famous for fifteen minutes, wasn’t perhaps specifically intended to apply to painting and other fine arts, but perhaps it was, in some sense, prescient in that regard. 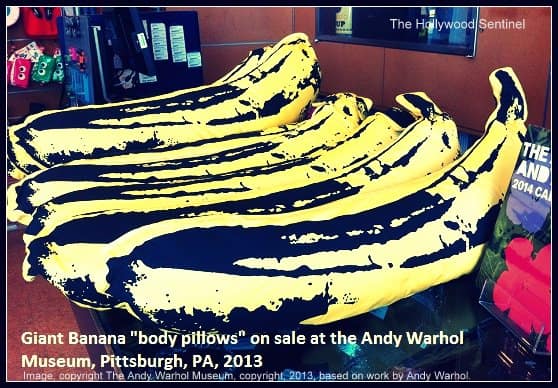 As Louis Camnitzer writes in “Art or Politics” for Art Nexus in regard to the increasing numbers of already famous people making lateral moves to the upper echelons of the art world, without suffering through the ritual hazing implicit in a formal art education, “The eclat, however, is not based on a democratization of art but in the consumption of celebrity.” Camnitzer notes that a Vladimir Putin painting fetched 1.37 million dollars at auction, and the work of naif 81-year-old Cecilia Gimenez has drawn more than 40,000 local tourists to see her botched restoration of the Ecce Homo. Marina Abramovic receives regular mentions on TMZ, not so much because she is a respected artist, as the fact that she has taken to collaborating with high profile actors and singers who see themselves as performance artists and the “paying of one’s dues” and “learning one’s craft” as a fait accompli. Once you’ve conquered Hollywood, according to the New Rules, you are as mobile and powerful as the Queen on a chess board. Some artists are offended. Others play the game, hoping to win.

Many artists are called famous, or even iconic, but few evoke as intense, even hysterical, a following as Frida Kahlo, whose work has not been displayed in France for more than 15 years. Her intimately scaled paintings, alongside her husband’s, will be shown from October 9, 2013, through January 13, 2014 at the Musee de l’Orangerie including masterpieces on loan from Museo Dolores Olmedo. The show portrays Diego Rivera from his early cubist works, to those that made him the founder of the Twentieth Century Mexican School. Through this unique curatorial concept, viewers will gain better understanding of Rivera and Kahlo’s dyadic artistic different yet complementary universes.

Hanging out with the Rockefellers, as did Kahlo and Rivera (until the mural incident), having your own world-class punk band like Genesis P. Orridge, or creating “Factory” made work that seems to have been made with its eventual licensing empire in mind (Warhol is used to sell liquor, perfume, skateboards, dresses, and more) may not MAKE an artist, but it certainly doesn’t hurt. Artists who explore controversial subject matter, like Tina La Porta, represented by the Robert Fontaine Gallery in Miami’s Wynwood district, whose work deals with her experience with schizophrenia, or Faith Ringgold, whose solo exhibition “American People, Black Light: Faith Ringgold’s Paintings of the 1960s,” on view at the National Museum of Women in the Arts from June 21″”November 10, deals with race relations and feminism, bring culturally critical viewpoints into the discourse that engage art audiences … and actually do make art a more democratic experience.

To read the rest of Moira’s article on L.A. art here above, visit The current issue of The Hollywood Sentinel, and go to the tab on the left of the screen of the new issue, found at the link at the bottom of this story here.

For 36 years, Dwight Cleveland has searched the globe for rare movie posters. What began as a love for the movies and an eye for the unique art of the film industry became the largest, most complete movie poster archive in the world. The archive includes every Best Picture winner at the Academy Awards and the top 100 films of all time as rated by The American Film Institute and The Internet Movie Database.

Dwight Cleveland states that, “We are seeking the perfect home for these movie posters. They should be in a film archive, movie museum or film library where they can live on in perpetuity. We’re looking for that one individual or institution that loves the movies enough to take this collection to the next level-to value, purchase and permanently house or donate it to the right institution. We’re searching from Hollywood to Bollywood, to find that person. If you are interested or know an interested party, please contact us through the site below;