Once again we are being asked to fear for our lives as a new terror warning is issued, telling people to be prepared for a possible “terrorist attack” in Europe.

US citizens have been asked to avoid (where possible) tourist areas, and places like train and bus stations, or airports if travelling to Europe. It is of course unclear how that can be avoided, especially if you are visiting Europe to see the sights.

The reason for this latest terror alert is based on the words of a so called al-Qaeda informant, who has been under interrogation in Afghanistan for the last two months, the blessing of the long dead Osama bin Laden, and of course the usual dose of sources that cannot be named.

Thankfully, more and more people are getting tired of these “terrorist” warnings, knowing that they are nothing more than a government attempt to control the public through fear. Apparently, travel within Europe has not been affected.

Osama bin Laden died many years ago, which is why you will never see a recent photo/video of him again. Especially after the CIA tried to pass off a “bin Laden double” on the public some years ago, who was nothing like the man at all. 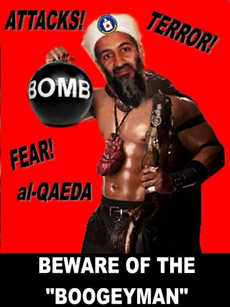 However, even though the “intelligence” may be a pack of lies, we shouldn’t rule out the possibility of a “false flag” operation. This is an event which will be blamed on “terrorists,” yet has been conceived by others to give the impression that there is a real danger.

I found the Wikipedia explanation of Boogeyman very apt, hence the title of this article:

“A bogeyman (also spelt bogieman, boogeyman or boogieman) is a monstrous imaginary figure used in threatening children. This legendary monster has no specific appearance, and conceptions of the monster can vary drastically even from household to household within the same community; in many cases, he simply has no set appearance in the mind of a child, but is just an amorphous embodiment of terror. Bogeyman can be used metaphorically to denote a person or thing of which someone has an irrational fear. Parents often say that if their child is naughty, the bogeyman will get them, in an effort to make them behave.”

If we were to exchange the word “children” to that of the “public,” we obtain an almost perfect explanation of what is really going on. We are given a rather vague image of who the Boogeyman is and allowed to create an image of this “monster” in our own minds, and if we don’t behave as we are supposed to, this monster will come and get us!

According to reports, al-Qaeda was created around 1988-89, about the same time Soviet troops began withdrawing from the disastrous war with Afghanistan. It is fairly common knowledge that the US, with the help of Osama bin Laden (who worked for the CIA) were involved in Afghanistan to help defeat the Soviets. After such a successful partnership, it makes sense that the United States would continue to use bin Laden for other projects, but obviously they would need a new cover, hence the creation of a “terrorist” group called al-Qaeda.

There has certainly been a lot of talk on the internet recently about unusual training exercises being carried out (especially in Britain) and many of these are not related to the preparation of an event that one would normally expect to see happen. This makes me believe that something terrible may well be planned, but not carried out by the people who will eventually take the blame for it.

The Boogeyman may well be real, but not quite the person or thing we have been frightened into thinking it is.