Duluth, Minnesota, marked the beginning of our Great Lake Adventure. Seeing Lake Superior was a real treat for Sherry. She said it reminded her of that amazing feeling of seeing the ocean for the first time. Sometimes it is just as much fun seeing the excitement of another’s experience.

We traveled through Wisconsin toward the Upper Peninsula of Michigan and stopped at The Northern Great Lakes Visitor Center, located just before Ashland. Little did we know this stop would begin the theme for this journey.

It’s early November and most of the tourists are gone. There were a only couple of cars in the huge parking lot. We were surprised that the Center was actually open and free admission. We had plenty of time to wonder, explore and learn about the Great Lakes. I did not remember that there were over 2,000 ships that sank in the lakes.

We met Rosy who worked at the information desk and she was more than happy to answer all our questions and gave us more ideas of places to visit. She told us the inspirational story of Mike Link and Kate Croley, the couple that walked around Lake Superior earlier in the year. The Center is operated by the US Department of Fish and Game and is staged for global eco system education and has fabulous natural trails.

The building itself has an interesting design, including a third floor observation area with an outdoor deck, with amazing views of the farm lands and Lake Superior. The center offers activities and events for all ages throughout the year. Check out what is happening at the Center at http://www.northerngreatlakescenter.org/

The best part of this journey is that we didn’t have any time restrictions. So we took the time and watched a documentary on the sinking of the Edmond Fitzgerald. It really struck my heart as it was just 2 days before the 35th Anniversary of the fate of the ship and her crew.

The story was told of that tragic November Day. Gordon Lightfoot’s song played and had more meaning to me than ever. Words from families & friends were told. It was hard not to bust a tear. The film showed how the ships bell was recovered, which is on display at the shipwreck museum at Whitefish Point for all to see.

We have converted our van to suit our traveling needs. When we get tired we find a nice quiet spot to park and cozy up in our van bed. We have a cooler with food, camp stove, coffee, coffee grinder & a tea pot.

What a great way to begin a day. We discovered another incredible find downtown called the Stone Cup Coffee House. All I can say is, Great Coffee, Friendly Staff, and Incredible Goodies. You can tell a lot about a place just by watching the customers that frequent places. The atmosphere is quite cozy and comfortable, a great place to meet a friend, have lunch, or just have coffee and read.

The next big adventure was going to the Mackinac Bridge. In our travels towards the bridge we stopped along the beach at several Road Side Parks. It allows us great access to the beach and wonderful places to take pictures. Had the temperature been a little warmer, Sherry would have jumped in the lake to get clean, so instead we found a truck stop with hot showers! It’s amazing how wonderful little things in life can be.

We arrived at the straits of Mackinac all fresh and clean and encountered the first road construction crossing the bridge. The sun was shining and the skies were blue, it was great to be here and to enjoy some more warm weather. Back in Montana, the snow was flying and the temperatures dropping.

The Mackinac is a suspension bridge, five miles long. I can’t imagine what it might be like to cross it on a high wind day. After crossing the bridge we stopped in the city of Mackinac and wandered along the shoreline taking pictures of the bridge and the Lighthouse. This time of year everything is all closed up for the season.

Mackinac has some very interesting History; Fort Mackinac was founded during the American Revolution. Believing Fort Michilimackinac at what is now Mackinaw City was too vulnerable to American attack, the British moved the fort to Mackinac Island in 1780.

Americans took control in 1796. In July 1812, in the first land engagement of the War of 1812 in the United States, the British captured the fort. In a bloody battle in 1814 the Americans attempted but failed to retake the fort. It was returned to the United States after the war. The fort remained active until 1895. During these years Mackinac Island was transformed from a center of the fur trade into a major summer resort.

Upon leaving Mackinac we headed down the east shoreline of Michigan following the shoreline of Lake Huron. We traveled that evening till around 7 pm and stopped in the town of Alpena. After driving around town for about an hour, we finally decided to go into John Lau’s Saloon & Steakhouse in the old section of town. The saloon was built in the 1800’s and has some interesting history and a maybe a ghost. Everything on the menu looked delicious, making it difficult to choose. The decor is full of character of interesting antiques and pictures on the walls.

Later on that evening, we ventured out to Long Lake to spend the night on the shores of the lake. It was absolutely beautiful! A dark, clear, calm evening with bright stars everywhere. Would you believe there was a reflection of the Big Dipper on the water? If it hadn’t been so chilly, I would have taken a picture, as it truly was an incredible site!

The next morning we were greeted by a crisp morning of frost. Once we got the Road-Trekin Van warmed up and the windows scraped, we headed into town. The evening before, we scouted out a coffee house so we knew exactly where to go in the morning. We went straight to the Cabin Creek Coffee shop for some interaction, internet and coffee. Seems to be a favorite stop for the locals, bet it’s jam packed during the “on” season. I

think this is where I justified having dessert for breakfast. Chocolate just goes well with coffee and the chewy raspberry chocolate cake- looked irresistible. Yes, it was incredible! If you’re ever in Alpena, be sure to stop by for a fabulous coffee experience. 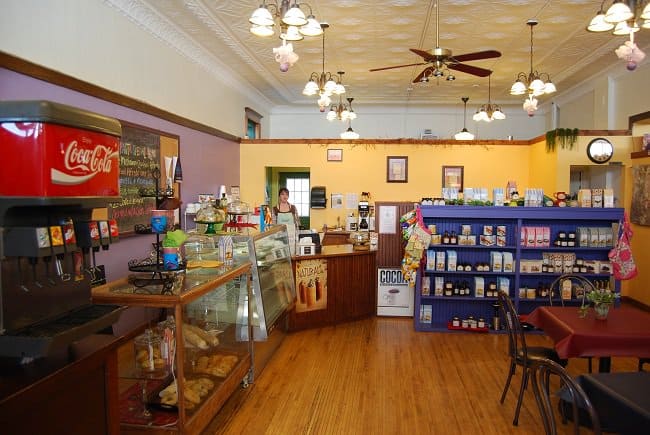 It was November 10, the anniversary of the sinking of the Edmund Fitzgerald which was quite fitting as our next stop was just down the street at the Thunder Bay National Marine Sanctuary to learn more about the ship wrecks of the Great Lakes. Did you know there are 200 ship wrecks just in Thunder Bay alone?

Divers are allowed to explore the wrecks, but not allowed to remove items from them. There are fabulous displays of ship models, memorable photos and lots of artifacts. It’s a little eerie to me viewing underwater photos of the wrecks, knowing many lives were lost with them. The Great Lakes Maritime Heritage center is the visitor center for the Thunder Bay National Marine Sanctuary and under water preserve. The Center is open year round and admission is free. 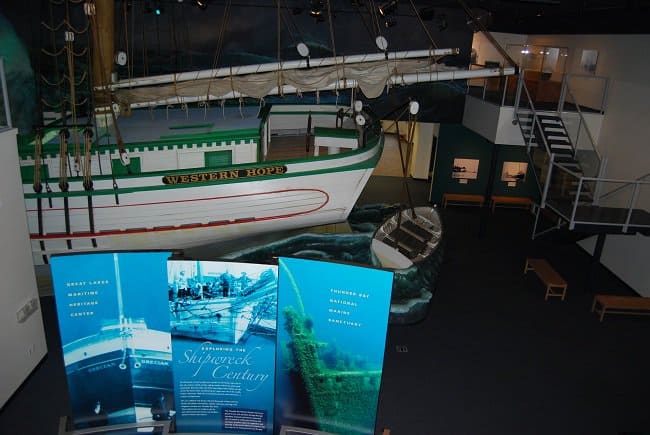 The Facility is 9,000 square feet, with a full size replica of a wooden Great Lakes Schooner and shipwreck where you can walk the decks, and experience a simulated storm upon the Great Lakes. You can touch the timbers of the boat resting on the lake bottom, without getting wet. The center is also a scientific research facility and a dive operations center. They also have a community boat building center and small watercraft workshop. It is a great learning experience for all ages!

After an incredible morning of discovery and conversation with some of the locals of Alpena, we continued down the shoreline of Lake Huron photographing Light houses along the way. We stopped in Port Huron to take photos of a freighter coming up the Huron River. We met up with family to try the famous deep fried chicken livers and found some porter beer from Great Lakes Brewing Company, named “Edmund Fitzgerald.” We made a toast to the crew and to the next adventure. Cheers!

Till next time… Road Trekin Adventures! 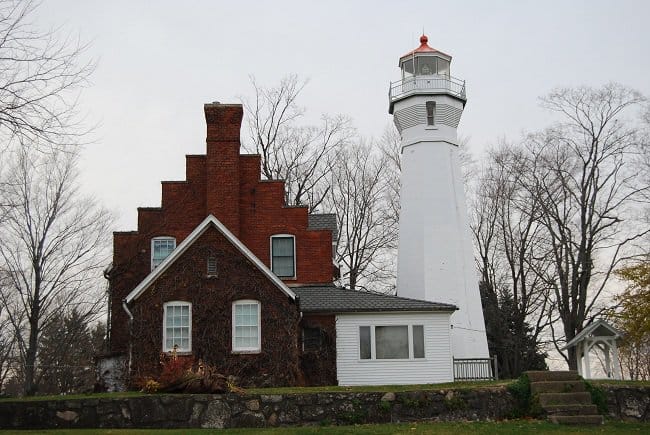 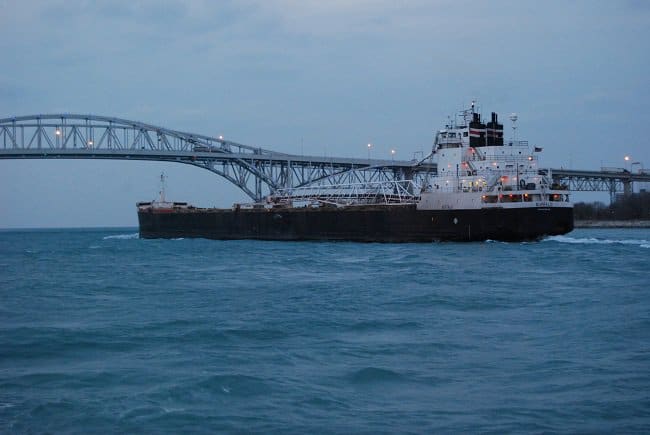