All comedians know timing is everything. The quality of an outcome is often the result of good or bad planning. Careful scheduling is planned timing. Frequently, however, good timing its a matter of luck. This applies to travel as well as comedy. We planned to travel to Greece in fall knowing that the cost would be less, the crowds would be thinner and the weather would be more comfortable than summer high season. Our planned timing was perfect. Our timing luck varied.

We had read about Athens in summer and decided that if we wanted massive sweating, crowds and horrendous air quality, that could be had much closer to home. For all its incredible history, Athens today is a huge European city with all the chaos that entails.

We arrived more refreshed than usual after a transatlantic flight. We had upgraded to business class and the flight was long enough to actually get some sleep. The flights to London and Madrid are too short. By the time you’ve had dinner and a movie, there are only a few hours before the sun comes up. I just stay up through the first day and catch up sleep that night. Timing planned, good outcome.

Athens is built on seven hills; our hotel was atop one of them, Lykavittos.

While not being in the midst of the action, this location offered a spectacular view of the Acropolis, especially at night.

First order of business in Athens, go see the Parthenon. If your history is a little hazy, the Parthenon is the ruin of a classic Greek temple that sits atop the Acropolis dedicated to Athena, the patron goddess of the city.

It was built in the fifth century B.C., during the height of Greek influence and is the era’s and the country’s signature icon.

We were told we couldn’t go to the Parthenon this week because it was closed. The park attendants were on strike. Bad luck, bad timing.

In every country in Europe, but especially in Greece, the employees of one or more vital public services are always out on strike; worth knowing, but not predictable. Just chill and adapt.

Though we were a bit down, we made do by visiting the Temple of Zeus, an interesting archeological site and we walked the center of the city. We visited the parks, the malls, and the Greek Parliament. We had a splendid lunch of carpaccio and tuna tartar in the lobby lounge of the Hotel Grande Bretagne. Truly elegant, that’s the place we’ll stay next visit.

That evening, we walked around our hotel neighborhood until we found a cafe at random that looked good. We were tired and opted for moussaka, Greek comfort food.

I had to try the house ouzo; it tasted like gasoline. Later that night, we sat out on the open patio of our hotel gazing at the Acropolis, the Parthenon bathed in inviting light.

“Come see me another time,” it seemed to be saying. We will.

The next day we were off for Mykonos. The biggest downside to island hopping is losing the travel days. We weren’t going to be denied any more time than necessary, so we drove our rental straight from the airport to our hotel, the Tharroe de Mykonos, dropped off our bags and set off exploring.

What we found is that Mykonos is dead in October. This is an island that during season has fifteen large beaches jam-packed with sun-worshippers. All the beaches were empty.

While we were engaged in our survey of empty beaches, we stopped for lunch in a tiny village at the center of the island called Ano Mera. The nicest looking cafe was, of course, empty but open so we browsed a refrigerated glass counter holding about twenty different types of Greek salads and spreads. We pointed to four things we didn’t recognize and waited to be served.

Virtually alone in the least touristy part of the island, we had one of the best lunches we could remember and a beautiful young woman carrying buckets of flowers to the village church for a wedding handed my wife a perfect rose. Good luck, timed just right; we applauded how wise we had been to come in October.

That night we walked into the white town down the hill that shares the island’s name. We found a little Greek restaurant in the part of town where the ferries dock and had a delicious meal of souvlaki. The other patrons in the restaurant were all locals.

The next morning, we returned to explore the town of Mykonos. It’s a labyrinth filled with art galleries, souvenir stores and motor scooter rental shops.

Mykonos is famous for tourists who think they can ride motor scooters; most are wrong. We saw the famous windmills, just like on the postcards and we had an Italian lunch at Little Venice.

We also saw all the tiny white and blue chapels surrounding the harbor like the jewels of a necklace.

On our last day, we took the ferry over to Delos, the small island adjacent to Mykonos and an archeological site of enormous importance.

Revered as the supposed birthplace of Apollo and Artemis, the island was, for nearly a thousand years, a sacred place. Temples were built to honor many gods; periodic “purifications” made certain that there were no births or deaths on the island. Anyone who had been buried there was dug up and moved. Then about the time Philip II of Macedon took over Greek rule in the middle 300’s B.C. the island became a decidedly more secular place.

Grand villas were built, as were public works, a theater and a huge forum that became the premier social center and shopping mall of the ancient world.

Merchants from distant lands came to Delos to trade.

Few ruins from the era are so well preserved. The statues are still beautiful, the foundations and columns of the great structures are intact.

The agora has stone structures praising Philip that are still readable. Even the mosaic floor tiles in many of the houses and stores are still colorful and mostly unbroken, all good luck for us.

Delos is overrun with impatient tourists in high season.

In the fall we had all the time we wanted and the entire island virtually to ourselves.

Arriving back at our hotel late afternoon, we decided to stop for a drink in the hotel lounge. A handsome middle age Greek fellow identified himself as the owner of the hotel and informed us we were the last guests of the season. Was he going to ask us to leave? No, he wanted to know more about Americans, so he invited us into the dining room, made some remarks (in Greek of course) to the waiter and commenced to treat us as his personal houseguests.

His wife soon joined us and dish after dish of delicious food kept coming out of the kitchen. Our hosts spoke excellent English and we discussed world politics, travel and ouzo. I mentioned to them that I had tried it in Athens and didn’t understand the fuss. They produced a small bottle of the “good stuff” and then everything was clear (except the ouzo which turns cloudy with a splash of water).

We had gotten to know an interesting Greek couple; had we come in season, we would have been just another couple of guests. The October plan turned out to be a good one and we had good luck as well. Timing is everything. 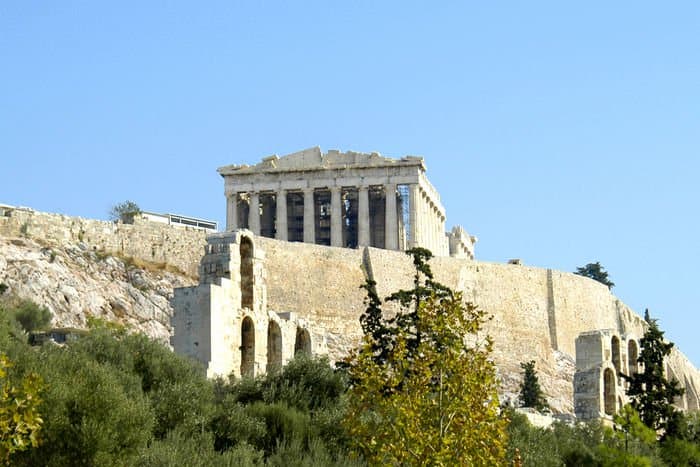 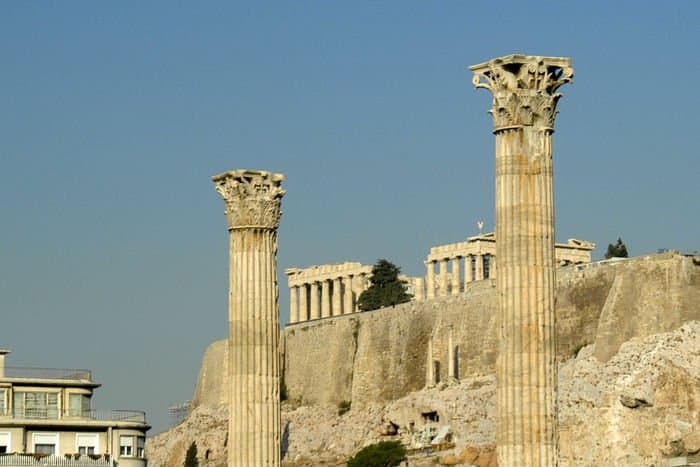