Now that much of the smoke has cleared around the University of Michigan, and the truth about this story continues to surface.

Recruits are again setting their sights on Ann Arbor.

Dee Hart’s name is continuing to surface on the Michigan Message boards. It appears that Dee will not be making his trip to Auburn this weekend, and signs are pointing toward a possible commitment to the University of Michigan.

Dee Hart is a stand out running back for his Orlando Dr. Phillips High School football team, he stands 5 foot 9 inches tall and packs a brutal punch with a 194 pound frame. But don’t mistake Hart as a bruiser, this kid can fly, and is often touted as the State of Florida’s best running back. 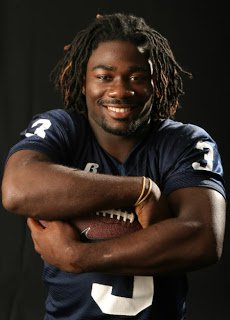 Personally I see a lot of Noel Divine in this kid. Minus the baggage that made RR think twice before bringing him to WV. By all accounts Hart is a fine student with a real respect for the game, and an affinity for the Michigan Wolverines. Ricardo Miller, a big time recruit from the Orlando area last year, was good friends with Hart, before he moved to Ann Arbor to finish his High School career. In some circles it has been said that Ricardo’s mom carries a lot of weight with the Hart family, and is a trusted family friend.

All of this buzz, and the natural family connections have Michigan in the drivers seat in my opinion. Of course I am not the only one who feels this way. Scout.com also has Dee leaning toward the Wolverines.

A Dee Hart commitment would not only be big for the University’s future at running back, but it could also be a big commitment, showing the rest of the nation, that this highly touted four star recruit from Florida no less, is not phased a bit by the current situation in Ann Arbor.

Check back tomorrow to see if we have any movement on the Dee Hart situation.