NewsBlaze News
Home Entertainment Movie Reviews SEX AND THE CITY 2 – or Should It Be Souks and...

Every TV episode of Sex and the City was character driven and strictly about relationships, as was Sex and the City, the film. So with this winning formula why would the sequel minimize emotional interaction, go heavy on plot, crazy on set design and, while wardrobe always played big in the background, have so many outfit changes that the characters become mannequins? It’s a fairly enjoyable watch, but this film has got way, way too much sizzle and definitely not enough sausage.

It is two years since Carrie married Mr Big and all is not well. They attend the wedding of Stanford, Carrie’s best friend, and Anthony, Charlotte’s best friend. Smith, Samantha’s ex, reappears and introduces her to a Middle Eastern businessman who wants Samantha to do his PR and offers to fly her and her friends on an all expenses trip to Abu Dhabi. The four leave on a private jet for their fabulous trip and SATC is back in business. 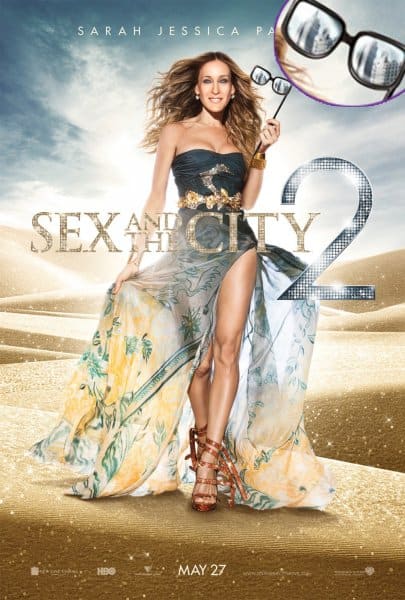 The opening scenes at the wedding are ostentatious, which is OK, but when Liza Minelli performs a cabaret the guests have a great time but the audience is waiting patiently for the glitz to end and the story to roll. Just before the ceremony, Carrie has a heart to heart with Stanford about the kind of marriage he is going to have and it seems this conversation is there to set the theme for the rest of the movie, which is that marriages can work in a lot of different ways. But, unlike the TV series, the story is in no way faithful to the theme and in the end it’s not clear what this film has to say, if anything at all. So the audience is forced to sit through all the razz, with everyone being goo-y nice, when Carrie and Stanford could have had the same conversation over a cup of coffee. There are many more scenes that seem to be there simply to pad out the limited emotional interaction and to make the running time exactly the same as SATC 1, perhaps so no one will notice that maybe the girls are, finally, running out of steam. But trying to fool the audience is always a dangerous game to play and there’s no doubt the Jimmy Choo crowd can pick up whiffs of treachery and Ralph Lauren Eau de Parfum with equal accuracy.

Although the emotional interaction is brief, when it’s there it works as well as ever, and it’s always nice to see the girls get into their little cat spats. Seeing Carrie and Big’s relationship begin to disintegrate is, of course, riveting, but there is just too little of it, or maybe all those roads have been travelled and there is simply nowhere else to go. Carrie, in fact, spends far more time running around souks, buying shoes and bumping into ex-boyfriends, than she does with her husband. The storylines of the other three are equally remote, with all issues being resolved in seconds by Carrie’s voice over at the end. But if you’re going to spend all your time riding camels in Abu Dahbi, what do you expect, apart from spectacular scenery?

So is this the end of the Sex and the City franchise? I doubt it. But should it be? Yes, for sure. The girls can still do the job but they’re all partied out and I’m sure they know, deep down, that it’s time to fold up their Versaces and pack away their dancing shoes for the very last time. Or, to put it bluntly – the horse is dead, so dismount.