“Mr. Hollywood” Shannon Rose was inducted into the Legends Lunch Hall of Fame along with longtime fan and contributor, 89 year old Harry Smith.

Shannon Rose was helped to break into wrestling nearly 28 years ago at the age of 12, by Gordon Solie and Dusty Rhodes. Rose has worked for ECW, NWA, among others including most notably starring in the EA Sports MMA Video Game.

Shannon almost died this past November with Double Pneumonia and kidney failure but battled back despite not much chance to return to the ring. He is a longtime carrier of MD and maintains a positive outlook on a daily basis as he fights through the horrific disease. Brian Blair presented him with a plaque during the luncheon which took place recently, for his contributions to the sport and for having the heart to continue on no matter what the challenges. 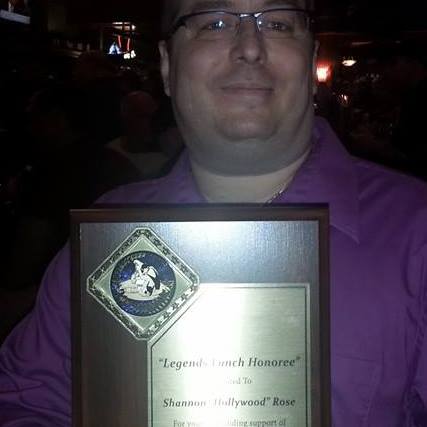 Blair holds these bi-monthly legends lunches to honor the greats in professional wrestling from the past, present and future. Brian Blair is an American politician and retired professional wrestler. He is best known for his appearances with the World Wrestling Foundation in the 1980s.

Brian Blair is an American politician and retired professional wrestler. He is best known for his appearances with the World Wrestling Federation under the ring name B. Brian Blair as one half of the tag team The Killer Bees in the 1980s. Brian Blair also owns and manages four Gold’s Gym fitness centers in the Tampa Bay area with fellow wrestler, Steve Keirn. He still has a passion for the business that ultimately gave him a face!

Shannon is a Hollywood Reporter, Radio Personality and Publicist with insider connections in Television and Radio. He is known for bringing new favorite movies, celebrity updates and television shows every week via the ‘Rose Hollywood Report’ on the Mancow Show.