The baseballs Hank Aaron hit during his career did not include enlarged, rubberized centers (known as pills) found in the current, Barry Bonds-era baseballs. The pill, according to a computed tomography (CT) study conducted by Universal Medical Systems, Inc. of Ohio (UMS), has increased significantly in size and density, thus improving the distance modern Bonds-era baseballs travel.

Comparisons of the enlarged rubberized-center Bonds-era baseball and the traditional Aaron-era baseball are clearly visualized in the computed tomography (CT) scans conducted by UMS. With assistance from Dr. Avrami S. Grader and Dr. Philip M. Halleck from the Center for Quantitative Imaging at Penn State University, UMS utilized a modified CT scanner for material testing to study Major League (“the League”) baseballs dating back to 1915.

An accepted methodology of measuring coefficient of restitution demonstrated the hit distance of the baseball has increased approximately 30 feet from the time Hank Aaron retired.

Rawlings became the exclusive supplier for the League’s baseballs in 1977, one year after Hank Aaron retired. In the first year alone the League witnessed a 63% increase in home runs (2,235 in 1976 vs. 3,644 in 1977) with the new baseball composition. 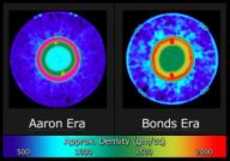 In 1999, one year after Mark McGwire broke the single-season home run record, the League decided to remove the timeless imprint “cushioned cork center” from official baseballs, according to David Zavagno, president of UMS, a worldwide innovator of diagnostic imaging technology for various industries.

“The League decided to juice itself so they pumped the new ball into their system,” states Zavagno. “By examining the CT images of Bonds-era baseballs, you can see the ball has been upgraded to include a rubberized pill, the addition of polyester in the windings and a very hard synthetic ring or spring. As the CT images demonstrate, the League apparently allowed the composition of the baseball to further change from 1998 to 2001 destroying the integrity of the game’s statistics, including home run records.”

Confronted with UMS’ CT scans in January, League spokesman Rich Levin told The Associated Press what UMS “calls a rubber ring is more like a cardboard washer.” The League’s baseball specifications do not state the presence of either synthetic rings or washers.

A League-sponsored study conducted in 2000 — which included dissecting baseballs — reported, “In destructive tests of baseballs, all models of baseballs failed to meet most of the construction tolerances.” 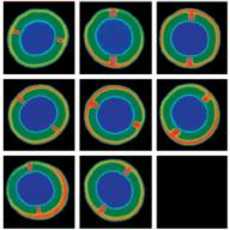 “According to our CT scans, the balls themselves are juiced,” states Zavagno. “Thomas, Sosa, Rodriguez, Griffey, Ramirez, Thome… they may or may not be entangled in the steroid scandal, but they certainly are members of the League-fabricated ‘juiced ball generation’. Bonds’ home-run record — along with other home-run milestones by different players of his generation — should have an asterisk next to their statistics: ‘achieved with League- approved juiced baseball.'”

UMS utilized the same methodology of examining rock core samples for presence of oil when examining Bonds-era and Aaron-era baseballs. The same state-of-the-art core-analysis imaging techniques were applied to accurately determine the properties and material changes in the baseball.

Based in Solon, Ohio, Universal Medical Systems, Inc. is a global user, designer and supplier of advanced innovative imaging systems and services with more than 20 years of computed tomography experience. For more information visit: .