Purchase tickets to attend Live at Centerstage tix 800-677-8499 or on the web at www.ticketlynx.com

The event will be seen live on PPV at http://gofightlive.tv

Hollywood Bad Boy Canseco is a monster but Danny has defeated everyone that has stepped up to the plate.

Canseco had this to say, “It is redemption, I am the king of Baseball and now I will knock Danny out to home plate.”

Danny had this to say in response “I have nothing against the guy. I just have faith in myself. I have beaten drugs, I have beaten alcohol, and I believe I have beaten being a man of bad character. Im 5’6,” 165 lbs. He is 6’6,” 265 lbs. It’s the only thing left for me. I will beat the giant.”

This is a battle of the Hollywood Bad Boys you do not want to miss, if you cannot make it LIVE then order on PPV LIVE at http://gofightlive.tv

The question will finally be answered, Who is the toughest?

There will be several matches on the undercard as well.

Danny originally gained fame in the role of the wisecracking Danny on “The Partridge Family.”

Danny has studied martial arts under Chuck Norris for over twenty years.

Danny has been in radio for over 20 years and has been hugely successful.

He has since starred in “Breaking Bonaduce” on VH1, a reality show about his personal life and “I Know My Kid’s A Star” about stage parents and child star hopefuls. Danny was the executive producer of both shows.

He recently defeated Rev. Bob Levy from the Howard Stern Show in a boxing match for the Celebrity Boxing Federation. 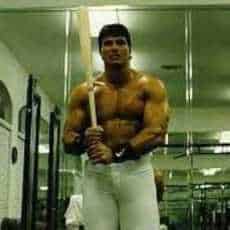 He was signed by the Oakland Athletics and began playing in 1986, causing a splash immediately. He was named American League Rookie of the Year after connecting 33 home-runs that year.

In 1987, he was joined in the team by Mark McGwire, who hit 49 home-runs that year, and they became known as the Bash Brothers.

In 1988, Canseco became the first player in Major League Baseball’s history to hit at least 42 home-runs and steal 40 bases in the same year. That year, he helped the Athletics to the World Series but they lost to the Los Angeles Dodgers in five games. Canseco was named the American League’s Most Valuable Player that year.

In 1989, Canseco was injured most of the year, but he still managed to hit 17 home-runs, and the Athletics won their first World Series since 1974, when they beat the San Francisco Giants in four games. Canseco experienced the infamous 1989 San Francisco earthquake before the start of game 3 of that series.

In 1990, Canseco came back in full strength, hitting 44 home-runs and taking the A’s to the World Series once again.

Canseco retired in May 2002 after a string of injury-filled seasons. His 462 career home runs rank him 26th on the career list.

Canseco has since done everything from writing a bestselling book on steroids, “Juiced,” to appearing on Surreal Life and talk shows.

Eclectic Media Productions was formed in 2007 by Shannon Rose. Its purpose is to provide its clients with the best in Public Relations.

They represent everyone from TV and Radio personalities to companies and new products.