The Big Ten will add Nebraska to the conference soon after the Nebraska Board of Regents vote to align with the Big Ten. This of course is a huge addition to the conference, one that seems to fit perfectly not only traditionally but geographically. Hail To The Victors Blog believes it is a definite home run.

The problem is Delaney will need a multiple home run game for expansion to be viewed as a success. 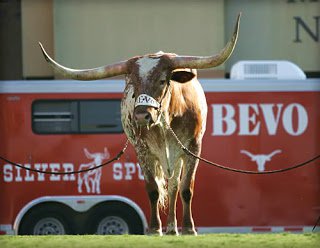 Texas is the most coveted program in the nation. It seems that the Big Ten and Pac 10 are the front runners for the Longhorns, with the SEC on the outside looking in for their services.

This doesn’t mean the SEC commissioner Mike Silve will not be active trying to do what is best for his conference. I have believed for sometime that Silve would like to have a Texas presence in the SEC, for no other reason than recruiting. In addition, I cannot see commissioner Silve just sitting back idle, watching the Pac and Big Ten change the face of college football without being heard. Apparently he hasn’t been idle, and has been in talks with Texas A&M.

So what we have is the Big Ten, wanting to bring either Texas alone or with Texas A&M to the conference. although the programs are geographically distant, those institutions embody what the Big Ten stands for. Both are AAU members, and both are research orientated public universities in great standing. Besides geography the Big Ten has a Texas Tech problem. If the Texas State Legislature ties Tech to Texas and A&M, The Big Ten will not allow Tech in because of its academic standing, which doesn’t fit the Big Ten mold. Needless to say The Big Ten will need help to land Texas in the expansion game.

The Pac 10 on the other hand has invited Texas, Tech, A&M, Oklahoma, Oklahoma State and Colorado to join Arizona and Arizona State in a new division within the Pac 10, which would make the Pac 10 the first college football super conference. This option seems to be the front runner, because it not only keeps like members together, it allows for a new TV deal for the Pac 10 to be formulated which could be very lucrative for all involved.

Long time rivals will meet today in Austin. Texas and Texas A&M are meeting not only to clear the air of expansion scenarios, but to decide if they will be going to the same conference. You would think this would be an easy decision. But it gets a little complicated if the SEC is truly involved with A&M. All signs from orangeblood.com and the like, point to Texas not wanting to go to the SEC. However many Aggies feel just the opposite, they would welcome an SEC invite, and possibly would like to be in a different conference than Texas, getting out from under the athletic supertanker. This stalemate could very well be difficult to overcome.

Hail To The Victors Blog with an unbelievable amount of help from the contributors at Frank The Tank’s Slant believes in the end Texas and A&M, will come to an agreement on joining the Pac 10 with their Big 12 mates.

But do not under estimate Mike Silve and the SEC. If the conference can make a strong pitch to Oklahoma or A&M which is already reported as happening, the Pac 10 deal could be on uneven ground.

This scenario could leave an opening for Texas, and ND to join the Big Ten with Nebraska, all while giving Delany the home run additions he has been striving for.

Of course for this example to occur, The Big 12 family would have to stop looking like the largest dysfunctional family on the planet, and Mike Silve of The SEC would have to check his ego at the door, and watch the Pac 10 become the first college football super conference.

When you look at it that way, maybe the Big Ten does have a shot at Texas.

Hail to The Victors Blog would love to hear your take on Big Ten Expansion.