The three men have one thing clearly in common; they have been fierce critics of President Barack Obama’s handling of terrorism and international relations. It is no secret that Trump is a foreign policy novice. The entire world is hanging on each post he is filling.

Sessions and Pompeo would both require Senate confirmation before assuming their designated roles; Flynn would not. The former military intelligence chief may need a congressional waiver since an unwritten word in the military is no political aspirations for seven years after retirement.

Flynn, who has no love lost for Islamic extremists, calls Islam a “political ideology” that “hides behind being a religion.” He will have daily access to Trump in the West Wing of the White House. They will work together on all national security decisions. 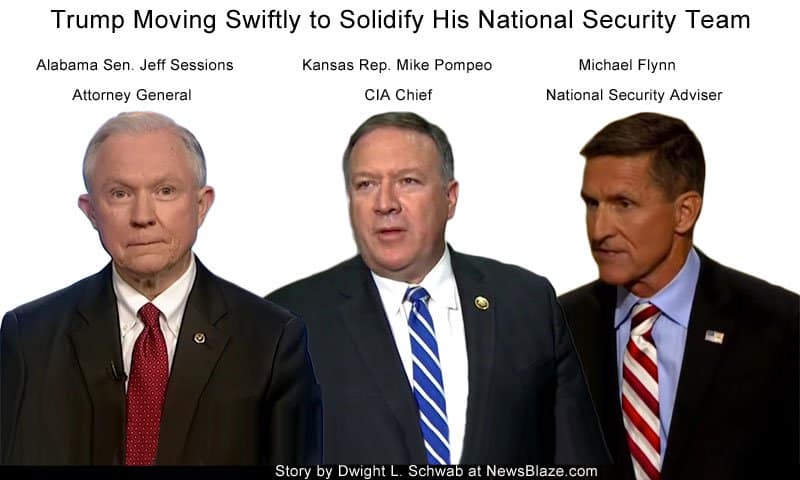 The general’s close relationship with Russia has worried national security experts. Flynn even traveled to Moscow to join Russian President Vladimir Putin at a celebration for RT, a Kremlin-backed television channel.

Sessions is an excellent pick. He was the first senator to endorse Trump, rallying behind the Republican’s hardline immigration policies. On Friday, Trump called Sessions “a world-class legal mind.” Many experts had thought he would be defense secretary or secretary of state with former NYC Mayor Rudy Giuliani at DOJ.

Sessions has tangled with the past two Democratic attorneys general, Eric Holder who resigned and Loretta Lynch under security for her part in the Clinton campaign and possible legal ramifications. His concern was whether terrorism suspects deserve American constitutional rights in civilian court and on the planned closure of the Guantanamo Bay detention facility.

Kansas Rep. Mike Pompeo is a highly respected conservative Republican and a strong critic of Obama’s nuclear deal with Iran. A three-term congressman, he graduated from the United States Military Academy at West Point and from Harvard Law School.

The Kansas congressman is a member of the House intelligence committee. He says former National Security Agency contractor Edward Snowden should face the death penalty for taking and releasing secret documents about surveillance programs in which the U.S. government collected the phone records of millions of Americans. It should be assumed Snowden has no pending travel schedule to the U.S.

In regard to Trump’s other positions to be filled, his choices for secretary of state are said to include former New York City Mayor Rudy Giuliani, former U.S. Ambassador to the United Nations John Bolton, Tennessee Sen. Bob Corker and South Carolina Gov. Nikki Haley, who met with Trump Thursday.

On Saturday, Trump will discuss the secretary of defense post with retired Gen. James Mattis, a contender to lead the Pentagon. Mattis would also require a congressional waiver to serve as defense secretary because he has not been out of uniform for the required minimum of seven years.

In addition, Trump plans to meet presidential nominee Mitt Romney, who lambasted Trump as a “con man” and a “fraud” in a stinging speech in March. Trump responded by repeatedly referring to Romney as a “loser.” How times change. It appears to be another olive branch Trump is extending to his most vocal foes, including Ted Cruz as a possible nominee for the Supreme Court.

There are now 63-days until President-elect Donald Trump’s stunning rise to President of the United States. His entire foreign and domestic team will be in place no later than January 20th, and most likely much sooner.