Buried in the seemingly endless Trump-bashing headlines and cries of Russian collusion was a page six headline last Tuesday. It underscored the negativity towards the Trump administration and the overactive sensational headlines. While idiots bloviate, Donald Trump gets on with the job, including filling empty Federal judiciary positions.

It was announced by the White House earlier this week the re-nomination of 51 federal judicial nominees left-over from the previous Congress. It signals the latest efforts by this administration to seat more conservative judges. Two of these appointments are for the notoriously liberal 9th Circuit Court in San Francisco. That is where Democrats generally plead their political beefs to judges known to legislate from the bench.

In the past 11 years, Democrats have lost an astounding 1000 legislative seats from the U.S. Senate, to the House and statewide offices. The federal judiciary has become their last stand for liberal appeals and the 9th Circuit Court is generally the target for favorable opinions.

That is rapidly changing under Donald Trump. The president has called the San Francisco-based 9th Circuit Court of Appeals “disgraceful” and politically biased.

Among the president’s appointees is Neomi Rao, the president’s “regulatory czar.” She would assume the seat of now-Supreme Court Associate Justice Brett Kavanaugh on the D.C. Circuit Court of Appeals. Rao is serious about regulatory reform. 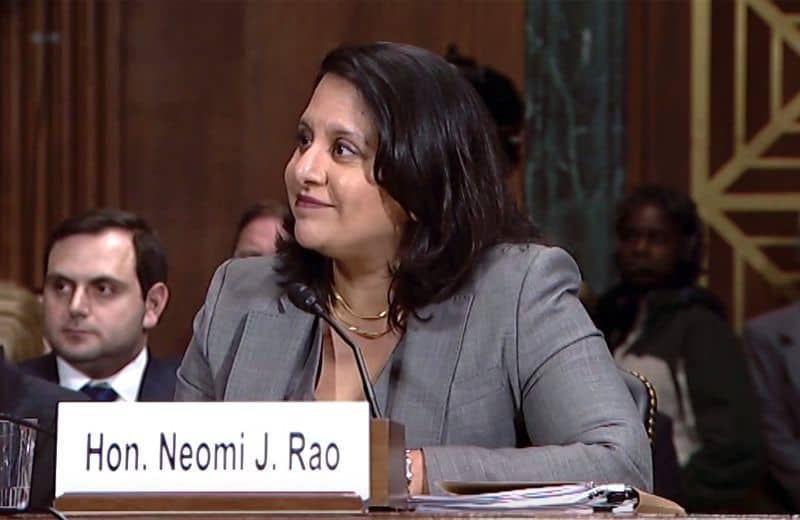 Much to the consternation of many far-left lawmakers in Washington, including Sen. Kamala Harris (D-CA), Trump is openly seeking judges to bring a more conservative and stricter constitutionalist environment to the federal judiciary.

Gone will be the opportunity to cherry-pick federal judges notorious for legislating liberal decisions for the left. That would include Trump’s ban on selected Muslim nations emigrating their people to our shores.

Meanwhile, three judges were missing from the re-nominated list presently. The White House has said that Judges Patrick Bumatay, Daniel Collins and Kenneth Kiyul Lee of California, and all members of the conservative Federalist Society, will be seated on the 9th Circuit and bypass the traditional (“blue slip process”) of getting the home state senator’s approval. Those senators are Diane Feinstein and Kamala Harris.

Times are changing dramatically. The liberal Ninth Circuit Court of Appeals, which encompasses nine Western states, has long been viewed as the most liberal of the circuit court districts. It has ruled against Trump on cases that include the Muslim travel ban and limits on funding to “sanctuary cities.”

Democrats have been obstructing Trump’s federal nominees for 18 months. There are significantly more vacancies than when President Trump took office. Senate Majority Leader Mitch McConnell (R-KY) has stated his commitment to make filling the vacancies a priority.

Since the Trump administration took power in January 2017, 85 federal judges have been installed. They include Associate Supreme Court Justices Neil Gorsuch and Brett Kavanaugh, and 30 appellate judges. Already the Supreme Court has become far more conservative for the next two generations. The federal judgeships are not far behind; the last vestige of support for liberal appeals.