The Democrats are becoming the Barnum and Bailey Circus Act of 2018. Speculation on who will be their presidential party nominee in 2020 has become almost laughable. From the aging Bernie Sanders and Joe Biden to the comical Elizabeth Warren and Cory Booker, it seems they cannot be serious.

Now comes word that billionaire Tom Steyer, the man who can’t think of anything but impeaching Donald Trump, will run. The more-money-than-God activist (as he likes to be called), will visit Iowa in May to headline a Democratic fundraiser.

This is the best the Democrats can do against their arch enemy Donald Trump? Pitting one billionaire against another? Yet it is what the liberal press calls a “flurry of activity for the California hedge-fund-manager-turned liberal activist.”

Steyer has an estimated net worth of well over $1 billion. He has wasted over $163 million of his own money on the last two election cycles. It has gotten the Democrats thrown out of the Oval Office, loss of the Senate and the House and a majority of the state governorships. 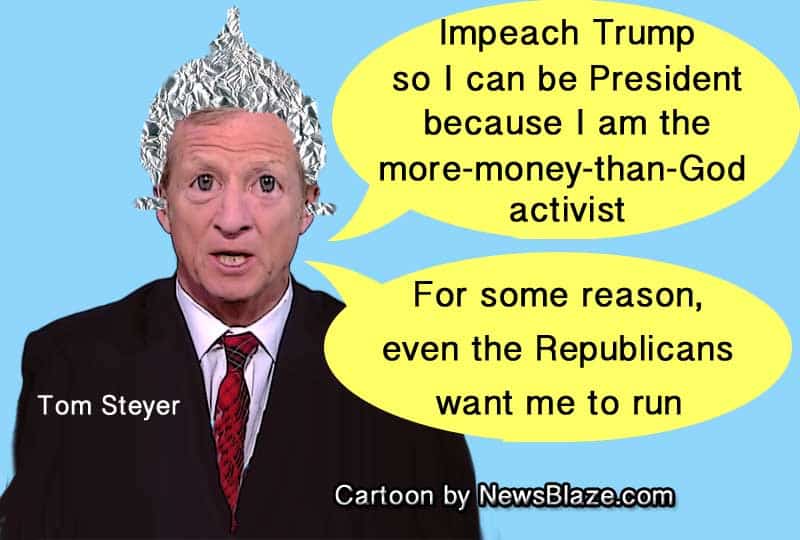 But the billionaire is undeterred by his past failures at the ballot box. Since the 2016 election, the liberal mega-donor has made the impeachment of Trump his number one priority. Like the whale was to Captain Ahab, Donald Trump is to Steyer.

He has vowed to spend $30 million this election cycle to flip control of the House of Representatives. By all indications, that looks less feasible by the week. Trump’s popularity continues to grow, and to Steyer’s disappointment, the economy is booming.

Steyer’s tactics are not fondly received by Democratic operatives. His obsession with impeachment is close to looney tunes. They believe Democrats should not focus on impeachment out of “principle” and normalizing such a threat is detrimental to our democracy.

That doesn’t deter Steyer. He believes in his own mind that Trump has already committed impeachable offenses. Meanwhile, his detractors believe such talk could backfire by energizing Trump supporters to hit the polls this midterm season. It could turn into a rallying cry for conservatives.

Steyer once was a top contender for the 2018 California gubernatorial race. But that picture wasn’t big enough for his sizable ego. He continues to donate millions in bribes, er donations, to Democratic candidates while keeping the door open for the 2020 presidential campaign.

There are more than a few Republicans who welcome Steyer’s ideas of a 2020 run. They believe his brand of politics is toxic and the “political correctness” will sour many to his cause. He is a ringleader of the left merely because of his wealth.

Believing his harsh brand of politics to be toxic to general election voters, many Republican strategists welcome the idea of the Steyer presidential campaign. The “new left” is undermining American values. Steyer is a domestic threat with no record and no background.