America is about to witness the opening of the world’s largest homeless shelter. That’s right, caring liberal Starbucks executives now say their bathrooms are open to anybody.

How long will these compassionate and inclusive Einstein-thinkers keep their jobs when abject chaos begins? This nonsense and a lesson in liberalism began last month. Two African-American men were arrested when they allegedly refused to leave a Philadelphia Starbucks.

They had purchased not a cent of goods from the retailer but were immediately attacked by people who ‘care’ for their cruel actions. Not to lose their ACLU good citizen status, Starbucks upped the ante and said they provide restrooms for everybody.

Supposedly the two men were targeted because they were black, not, God forbid, because they might be loitering. Naturally the argument was the old, “If it had been two white guys … “

Enter Starbucks with a long history of compassion and tolerance. They may rue the day they beat on that drum. They decided to bow to political correctness, defy common sense and throw business caution to the wind. 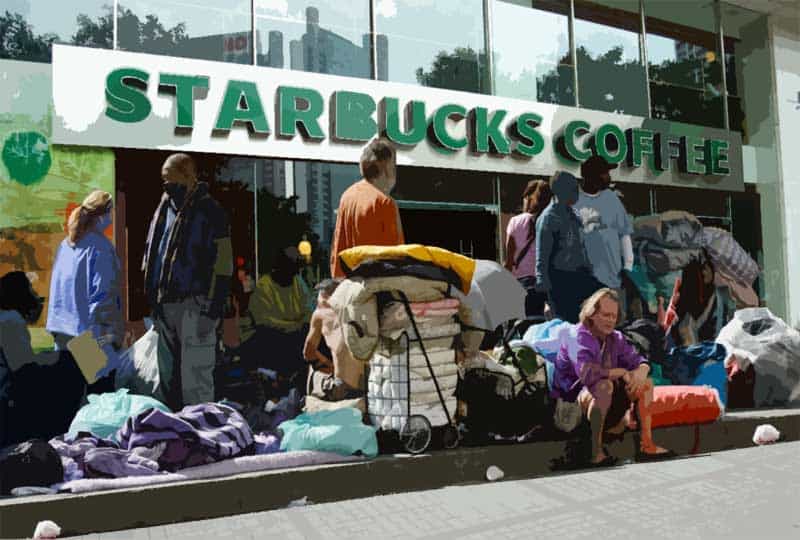 Suddenly a new Starbucks policy emerged; “non-paying customers can use the bathroom.” Starbucks Executive Chairman Howard Schultz may seek the Democratic nomination for president of the United States in 2020. He almost blew it with common sense.

The next question is how long will this policy last and will the liberal media hold Howard to his promise of open bathrooms for the masses? The answers are, not long and no.

Soon the company will discover there are not enough seats for paying customers and those customers are going elsewhere. They will be surprised to learn that most people do not go to Starbucks to be at a homeless shelter.

But presently, liberal economics of smugness and superiority rule the day. It’s much like Bernie sending everyone to college at no charge. Eventually other people’s patience or money runs out and the economic solution is called what it was from the beginning; bunk.

But until further notice, Starbucks management has justified its bizarre decision to turn its stores into public facilities with their version of left-wing sociology. They will soon find out they are a business and not a charity. That is a revelation that may take time to sink in. In the meantime, they will remain the darling of the slanted media as their store mangers grit their collective teeth.

The next step in this process will be reported by non-liberal media. There will be a realization that customers don’t really enjoy sharing their space with transients. Even fewer of these enlightened citizens will offer to buy those people a cup of coffee or invite them to spend the night at their private home.

Suddenly the street people are invading the liberals’ haven wi-fi and their own private office. What they are now faced with is the reality they fight so hard for, but don’t want to mingle with.

Oh, the hypocrisy of the left! Their perceived world that requires daily lectures to the rest of us has been invaded by their own invitation. Next they will need to figure how to exit gracefully with a fully cooperative media leading the way to save face.

Watch and learn how that is done over the next few weeks. Be sure the result will be that it was your fault to begin with.