Indiana recently passed a law saying essentially that people could, for religious reasons, refuse service to gays and lesbians or, essentially any other minority they don’t like because the government wouldn’t take any action against them.

Senate Bill 101 takes effect July 1. It states in part you can discriminate if it will “substantially burden a person’s exercise of religion” unless it is furthering a “compelling government interest” and acting in the least restrictive way possible. complicated wording which many legal experts have stated could give religious groups the ability to refuse service to gays and lesbians or others, in otherwise public businesses.

Personally I feel it is a violation of my religious rights to be forced to pay taxes to contribute to the salaries of such idiots. (By the way, I am an ordained minister and my particular religion objects to following laws passed by morons.)

In his press conference today the governor is STILL saying from the outset that he is “proud to have signed the religious freedom law,” then went on for 15 minutes with mealy-mouthed arguments that only showed that he still doesn’t get it.

In answering the very first press question, he stated he also is setting the record straight, and a few seconds later repeated “straight” just to make it clear that he meant just that.

He also talks about the “intent” of the legislators but any lawyer will tell you that this would require him to know the operation of another’s mind and is not any sort of legal argument accepted in any U.S. court even as hearsay.

Those who are different, those with long hair, different color skins, a handicap, or who worship in a different way, or those who don’t believe in god at all, or those wish to profess no belief in any god, or those who live together without benefit of marriage, or anyone who is not an old white guy pounding a bible, owe the governor and legislature of Indiana a great vote of thanks to finally bring the freedom from religion into a mainstream discussion and show the religious freedom act is nothing less than legalization of discrimination. 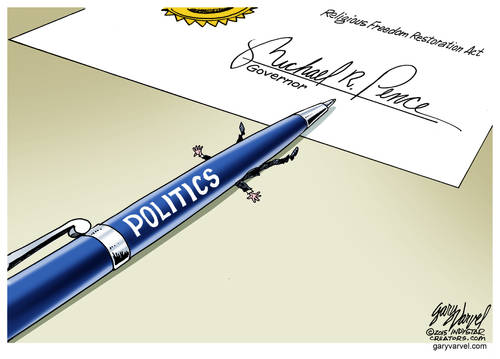 Indiana’s Republican Legislative Speaker went public with the express intention of setting the record “straight!” A meaningful Freudian slip? Or an intentional signal to the religious fanatics who supported the law.

The official digest of the law is:

You decide, is this license to discriminate? Pandering to the religious right? Or, simply setting the record, and perhaps the STATE, “straight?”

Need I say that some religious people feel strongly that anyone who doesn’t worship exactly their way not only shouldn’t be served in their businesses or courts, they shouldn’t be permitted to keep breathing. In the most extreme version this involves beheading non-believers.

Near the end of his press conference, the Governor told the story of how he was in Dr. King’s church just before Selma and that he marched with the group. Isn’t that just another way of saying, “some of my best friends …”

Finally, when asked once more for a yes or no on the question “Should gays and lesbians be discriminated against,” he sidestepped it by saying he personally didn’t believe in discrimination. That is a FAR, FAR different thing. President Roosevelt was personally against war, but he led us in a fight against Hitler. Other examples of politicians who don’t support something yet decide to enforce contrary laws abound.