The four round light-hearted political trivia contest remained close practically the whole evening but after each round, the “Press Pass” led each way. Los Angeles Times Correspondent, Mike Memoli, in an exclusive comment to Newsblaze after the event said “My strategy was to sit back, have a beer and let Greg [Giroux] do all the work.” Giroux, Bloomberg News campaigns and elections reporter, on the other hand stated ,“It was a team effort.” 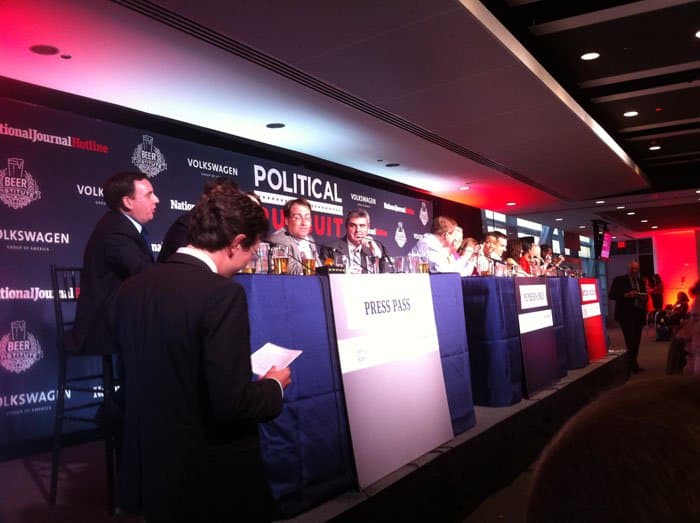 The event overcame frequent buzzer malfunctions that incorporated great bits of humor from moderator Nation Journal editor, Tim Grieve, who at one point humorously admonished participants by using a yellow card – a send up from this year’s World Cup.

Questions that the participants were asked at this year’s event ranged from: At which DC restaurant did Trey Radel purchase cocaine? Rep. Loretta Sanchez of California chimed in with the correct answer “Circa” and added “I guess you had to be there.” to Which of these weapons has NOT been fired in a GOP campaign ad in this season? Slingshot, crossbow, Gun or cannon? Slingshot was the correct answer.

Included in the program were guest appearances by the Fox News Channel’s Greta Van Susteren, MSNBC’s Chuck Todd and CNN’s Jake Tapper who peppered morsels of political trivia at the participants.

Rep. Richard Hudson, who was named the evening’s fan favorite, told Newsblaze how he managed to take home the Rep. Tom Davis Trophy. “My strategy was not to embarrass myself.” On the surface, that may have been the strategy, but Hudson also counted on many members of his staff sitting in the front section of the Knight conference center to Tweet at the hashtag #ppursuit to to best the others.

Hudson delivered several memorable lines during the evening, including one when Jake Tapper asked which two members of congress managed the congressional baseball team, and the panelists noted that House Speaker John Boehner wanted to fire the GOP manager. Hudson chimed in with “that was not a joke.”

Another illuminating comment came from Rep. Steve Israel (D-NY) when the group was asked about who the last member of congress was to switch parties? The answer was Alabama congressman Parker Griffith. Israel responded “You can keep him.”

Overall National Journal editor Tim Grieve remarked to Newsblaze at the conclusion of the evening “It was a great opportunity for people to come together and have fun.” Grieve also noted and gave his staff much credit for coming up with the humorous gags such as the yellow card. “All I did was just read the cards they gave me.” Grieve added.

Political Pursuit is expected to return next year at a date to be announced.