NewsBlaze News
Home USA Politics OMG – What a week that was!

Did you read about the Bosnian Muslim, Fata Lemes 33, in The Mirror? She quit her job as a cocktail waitress in a London bar because she refused to wear a bright red dress for work.

She claimed the short, low-cut dress was “disgusting” and made her look “like a prostitute.” Even though a tribunal panel rejected her claim that the dress was “sexually revealing and indecent,” she was awarded almost Pounds 3,000 in compensation, but they concluded that the Bosnian Muslim “holds views about modesty and decency which some might think unusual in Britain.”

I would imagine there are many bars in Bosnia that ask the same of their staff, but if this is not the case, she should at least remember that she is working in Britain (not Bosnia).

Considering Muslims object to alcohol on religious grounds, what was she doing in a job like that in the first place? Whilst it is true that the “objection” is to drinking alcohol, almost 2 years ago the Muslim checkout staff at Sainsbury’s refused to even sell it to customers! 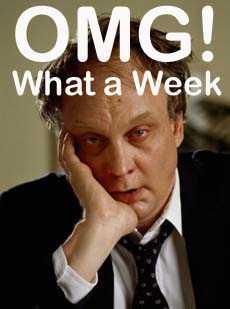 Whenever a customer arrived at the checkout with alcohol, the staff member would raise their hand and someone else would takeover.

Although applicants should mention such objections before they accept the job, Sainsbury’s said “it was keen to accommodate the religious beliefs of all staff.” I wonder what they would say to me if I said I wouldn’t touch any products that contain garlic (on religious grounds)? Alan Sugar’s words spring to mind. “You’re Fired!”

Apparently, even though the sensitive Fata Lemes said “I was brought up Muslim and am not used to wearing sexually attractive clothes.” She was photographed after the tribunal wearing a “skimpy outfit.” She commented that “it was taken on a beach and was irrelevant to her claim.”

Maybe her religious beliefs are just as fashionable as the clothes she wears and the places where she works?

Brown in the hot seat again!

It was recently announced that Gordon Brown has agreed to an “independent” inquiry into Britain’s involvement in the Iraq war.

Unfortunately, this inquiry will be carried out in secret and is estimated to take at least a year to complete (just long enough for the Labour Party to be replaced at the next General Election).

We are told that this is not to discover who was to blame for the illegal invasion of Iraq, but to ensure that everything was done as well as it should have been.

And who are the members of this “independent” panel that will carry out this inquiry? Most (if not all) are closely tied to the Labour Party and Tony Blair. One of the members, Sir Roderick Lyne, is a former British Ambassador to Moscow. He retired in 2004 and took up a number of posts in the private sector, including a job as “Special Adviser” to BP, Britain’s oil giant. BP, as we know, have interests in Russia and Iraq (isn’t that a surprise).

The whole thing would be amusing, if it wasn’t for the fact that so many have died as a result of this oil war. How these politicians sleep at night amazes me!

The British people have become so obsessed with being “politically correct,” that they consider a joke at the expense of anyone non-British a hanging offence nowadays.

David Cameron was merely explaining his concern about the identity card scheme and didn’t want the public to be greeted with the request “Where are your papers?” However, to emphasize the point, he said this with a German accent.

A woman in the audience raised her hand and asked him: “I wonder about the wisdom of you adopting a German accent?” to which Cameron replied “It was meant to be light-hearted.”

The British often use German accents to make points like this and are mimicking the accents used in old war films (not the people of Germany as they are today). I dare say foreigners do the same with the British accent, and this is something we do not find offensive.

This “humour” can be found in films like “Snatch,” where the character “Turkish” (on seeing his friend with a gun) says “What’s that for Tommy, zee Germans?” Or in a popular British comedy called “Allo, Allo,” set in France during the Second World War.

Apart from being forced to change our customs and traditions, it would seem that the British must surrender their most famous treasure of all, their humour, and that’s no laughing matter!

The British (and American) public is facing extinction because of our government’s overwhelming desire to over-protect minorities and people in other countries (from our humour and free speech), yet our leaders happily insult the heads of other countries (and invade them), attracting more hatred than we could ever possibly achieve.

I wonder if the ADL will be inviting Cameron for a little “talk” soon and some political “correction?” O mine Got, Vot vill zay think of all ziss?