The foremost question for the stadium full of Democrats running for president is how they can deal with the booming economy. There is no doubt it will be President Trump’s number one campaign theme.

On top of that, the stock market is way up, unemployment is way down and minorities are enjoying the best unemployment among their races than at any time in history. That includes higher wages and low inflation.

The great news for America is ironically bad news for the Democrats. So how can they rationalize the incredible economy under Trump compared to the eight years their president, Barack Obama. Under Obama, they watched the economy flounder from 2009 to 2017. Back then, high unemployment, low labor force participation and stagnant wages were the new normal.

Could it be that back then the Democrats welcomed unemployment, didn’t want wage growth or empowerment of workers under Obama? Was it a way to criticize the mess on their opponents with the low-IQ voters?

Under Obama, they incessantly whined about the skills mismatch, workers were hard to find and nobody wanted the low wage jobs. Remember? It was even thrown out there that thousands of businesses voluntarily went out of business to prevent Obama from having a robust economy. 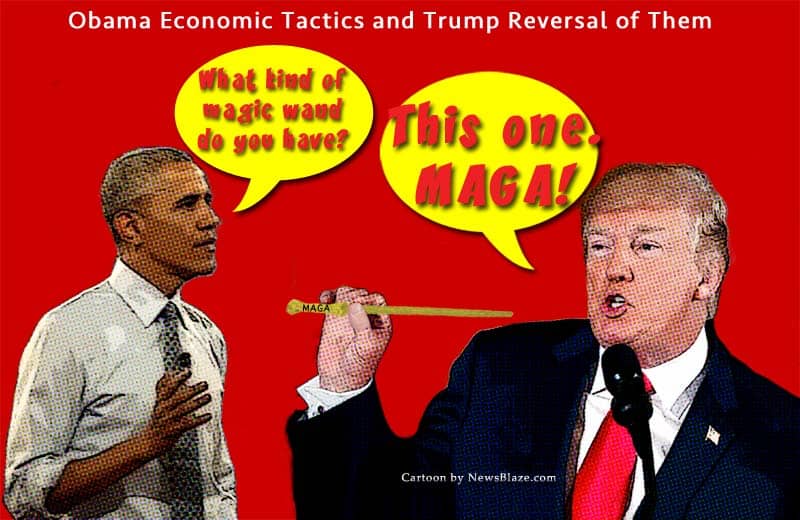 There is no question the economy was a mess when Obama took power in 2017. But it wasn’t a first by any means. One needs to look no further than FDR in 1933. The economy was in deep depression. And like Obama, FDR used the economy to fundamentally attempt a total change in American society by growing the federal government and its power.

Obama tried to use change in the economy to increase government influence just as FDR tried. He reduced the workforce by nearly nine million by liberalizing rules for disability insurance and create a new class of benefit recipients who would reliably vote Democrat.

Then came Trump. With this new economic boom, both consumers and employers feel more secure in their finances and have more confidence to make major investments and purchases. That inhibits the growth of big government and more financial regulations.

A perfect example is government getting out of the way of oil/gas exploration and extraction being a major stimulus to the national economy.

Obama was all for cheap foreign workers. He pushed hard for more immigration that would most certainly be a new base for the Democratic Party taking credit for all the ‘freebies’ provided by the taxpayers.

America got cheap foreign workers at the cost of Americans on the dole.

Demagogues and far-left ideologies will rationalize Obama’s tactics. They will try desperately to convince a skeptical voting base that Barack Obama created this economic America. Only the most hardcore of the anti-Trump electorate will be naïve enough to believe it.