Have you ever truly asked yourself how much you know about the President of the United States who served eight years? When people mention the words ‘Manchurian Candidate’ concerning Barack Obama, are they crazy? – or could it be true?

It will be very interesting when his presidential library is completed. Just what will the common man find in there to provide clues about who this president was? Libraries are where you find information and there is a whole lot we do not know about this very public man who essentially is unknown outside his media clippings.

Consider this, in a time of over-exposure of our public figures on social media, Obama remains an enigma. Americans are enthralled by our public figures, yet so little is known about the man; Barack Obama. That is, no real humanizing facts.

There is the lack of any total and verifiable proof of his citizenship through brilliant ‘document managing’ of his very questionable birth certificate. Experts who have spent years investigating this document are convinced it is falsified beyond a doubt. It is the media that portrays those who question it as ‘racist,’ etc.

There is so much more. There appear to be no birth certificates of his daughters that can be found. No one who ever dated him has shown up or written a book. One would think at least one such woman would come forward to write a book or something to garner attention.

No politician is perfect by any means. They are human. For instance, JFK’s affairs were notorious, John McCain was certainly no saint, we know all about Sarah Palin’s courtship with Todd, Joe Biden’s aneurysms and Dick Cheney and Bill Clinton’s heart problems. Yet nothing about Obama. 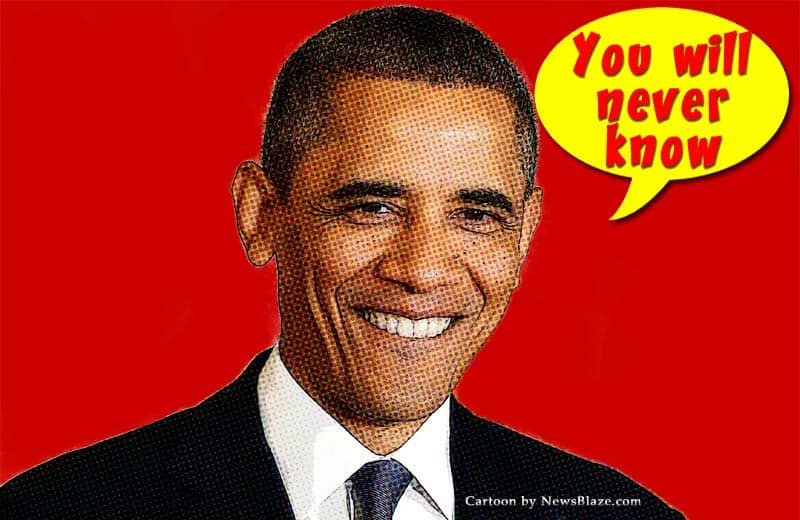 No Wedding Photos, No Graduation

Who was best man at Obama’s wedding? Who were his groomsmen? There is no footage of his college graduation with him in it. Has anyone talked to the professors? No one is bragging that they knew him or taught him or lived with him.

Why haven’t we ever seen his college transcripts? How did he pay for such expensive educations at Occidental, Columbia and Harvard? When and where did he meet Michele, and how? Are there photos there?

Every president gives their private photos to their presidential library. Where are they? Again, during his college and law school years, who knew him, who attended school with him, friends, etc.? Not one person has ever come forward from his past; not one.

It certainly is very, very strange.

Who is this man that Americans elected, basically unqualified, inexperienced and hardly known by a single soul? Is he truly the “The Manchurian Candidate?”

One strange thing from March 10, 1983 is a Sundial Magazine essay, authored by “Barack Obama.” A PDF copy of this magazine appears on the Columbia website. The writing does not flow well. It is clearly written by someone other than the person who masterfully wrote “Dreams From My Father.”

Studied carefully, this short article paints a bleak picture of Obama’s views, that America is to blame for everything bad in the world.

Surely Someone Knew Obama From Columbia?

There must be someone who knew him as clownish, silly, silent, talkative, dated him, swam with him, smoked with him; something. Although former Clinton White House aide and ABC personality George Stephanopoulos went to Columbia around the same time, he graduated a year ahead of Obama.

He didn’t know Obama at Columbia.

Known as a great orator, why doesn’t anyone remember Obama? Why won’t he allow Columbia to release his records? Only one person says he remembers Obama at Columbia University, and that is a fact.

It has been reported that Fox News contacted 400 Columbia University students from the period when Obama claims to have been there. Not one remembered him. It isn’t known if this is really true.

Wayne Allyn Root, a writer, was a political science major at Columbia who also graduated in 1983. In 2008, Root said of Obama, “I don’t know a single person at Columbia that knew him, and they all know me. I don’t have a classmate who ever knew Barack Obama at Columbia, ever.”

Root went on to saying 2008, “At our class reunion, our 20th reunion five years ago, who was asked to be the speaker of the class? Me. No one ever heard of Barack!”

Obama’s photograph does not appear in the school’s yearbooks and Obama consistently declined requests to talk about his two years at Columbia, provide school records or provide the name of any former classmates or friends while at Columbia.

The media ignored all of this at the time, and they still do now. Can you imagine if this was anyone else? So many unanswered questions about this public mystery man.

Could it be that this highly unqualified person that became president for eight years is basically a stranger to 325 million Americans? Were we simply duped by a media that never bothered to dig below the surface concerning this man who professed “Hope and Change?”

Some 1983 Columbia students moved to Israel across 30 years since graduating. None of them know Obama. Journalist Judy Maltz wrote in 2013, “Not one of us remembers Barack Obama – who transferred to Columbia after his sophomore year at Occidental College in California – from our undergrad years, nor do we know anyone else who does.”

Another Columbia grad says she knew everyone, but not Obama.

“If he wasn’t on my radar, he wasn’t on anyone’s radar,” asserts Jamie Miller, a mother of five, who lives in Beit Shemesh and remains active in the alumni association, traveling back to New York every five years to attend reunions.

“I was a cheerleader, so I knew all the jocks,” says Miller, who went to law school after college and today works as a librarian and English teacher. “I was in the marching band, I worked on the yearbook, and I was involved in student government, so I knew everyone. But I never saw him around.”

Phil Boerner, a Columbia student said he shared a room with the future president during one semester in his first year at Columbia. Boerner also said he went on walks and runs with Obama. Boerner has a photo of Obama and his friend Sohale Siddiqi sitting on a couch together in 1981. Boerner also has a photo of himself that he says Obama took.

Wayne Allyn Root, a 1983 political science graduate and Libertarian candidate, said he phoned Professor Henry Graff, “perhaps the most legendary and honored professor ever at Columbia University,” to speak to him and ask about Obama. Root says Professor Graff was “THE American History and Diplomatic History professor at Columbia for 46 years.”

Here is what Root said Professor Graff told him:

“I taught at Columbia for 46 years. I taught every significant American politician that ever studied at Columbia. I know them all. I’m proud of them all. Between American History and Diplomatic History, one way or another, they all had to come through my classes. Not Obama. I never had a student with that name in any of my classes. I never met him, never saw him, never heard of him.”

Who Is Barack Obama?

Why would Barack Obama spend millions hiding his identiry, yet fail to help his poor family, who he leveraged to tell his story?

One final question. Who in the hell is Barack Obama? Are we dumb or what?