Chris Simcox, founder of the Minuteman Civil Defense Corps has ended his campaign for the U.S. Senate seat of John McCain. The basis of the Simcox challenge to McCain was McCain’s advocacy for immigration amnesty, and because he votes for bailouts and open borders.

Simcox said “John McCain has been in office for far too long, and he is not interested in defending American values.” After exiting the race, Simcox now plans to support Former Congressman J.D. Hayworth, who is also challenging McCain. 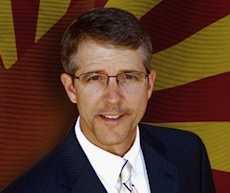 Once Hayworth entered the race against McCain, Simcox decided the mission to elect an American Patriot to the United State Senate was more important than his own aspirations.

Saying “the time is ripe for a new Minuteman revolution,” Simcox says, “although the bad news is the Obama Administration has taken us to the brink of destruction, the good news is that the people of this country have woken up!”

As founder of the Minuteman Civil Defense Corps, Simcox has quite a following and will work to rally anti-amnesty advocates behind Hayworth.