If the lives of Asian Americans in this country remain faceless and their stories unspoken within any national conversation, even more invisibilized, when not caricatured or outright demonized, are the struggles of single working mothers, especially in those immigrant communities, and with a progressively diminishing social support system for mothers and children in general. Which renders writer/director Tze Chung’s heartfelt and profoundly touching Children Of Invention a more than welcome addition, in a film world where mothers more often than not, get a bad rap for everything that ails US society when it comes to shortchanging children.

Cindy Cheung is Elaine Cheng in Children Of Invention, a stressed out Taiwan born suburban Boston mom whose estranged husband has abandoned the family and relocated to Hong Kong, leaving Elaine to raise their two children alone. Undocumented after her work visa expires, Elaine resorts to any work she can find, which embroils her in pay-to-play sales scams ripping off either her or her customers. When Elaine can’t keep up the mortgage payments on their home and is evicted, she becomes a desperate squatter in an unfinished condominium with her two children, preteen Raymond (Michael Chen) and younger daughter Tina (Crystal Chiu). 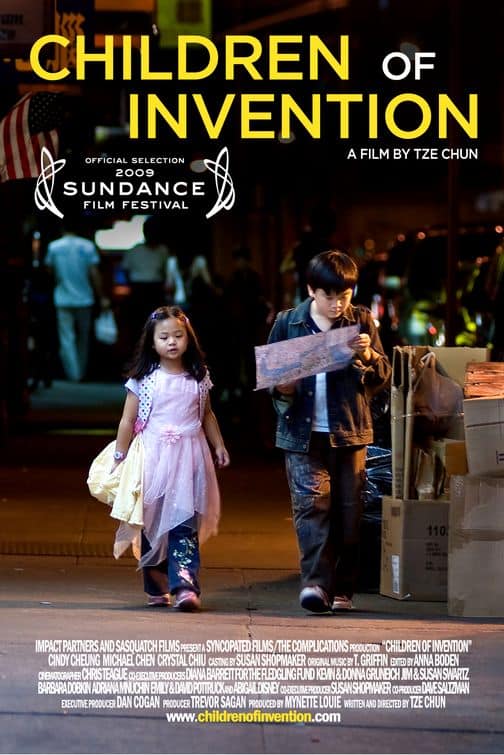 Latchkey kids frequently left alone to fend for themselves, the children wake up realizing one day that something terrible must have happened to their mother, when she fails to return home. And so they wander the streets of Boston in search of solutions to their predicament, never quite giving up hope.

Based on the filmmaker’s own early years as a neglected child often left to his own devices as his mother struggled to make ends meet, Chung is brutally candid about the stress and pain that go along with growing up under economically dire circumstances. Along with a whole host of alarming issues in society today, touching on the plight of immigrants, foreclosures, moms and children on their own in an uncaring system, and the way workers find themselves harmfully pitted against one another for survival. While his portrait of a mother who can’t fully be there for her children and is driven to bad decisions under the impact of acute daily crisis, is filled with heartbreak, regret and nevertheless enormous compassion.

Children Of Invention will debut 3/12 at the newly opened Big Cinemas in New York City, formerly The ImaginAsian Theater. More information about openings in LA and Boston, is online at: us.bigcinemas.com, and information about the film is at: childrenofinvention.com.