The liberal media in this country has most Americans believing the Democratic Party is a substantial force to be reckoned with. The opposite is the case.

National mainstream media wants you to believe that the Republicans are in disarray, Russians lurk around every corner in the White House and President Trump is on the verge of impeachment. The media churn out a diatribe of misleading information on a 24/7 news cycle.

Where the truth lies is a different story. That is what Donald Trump would call “fake news.” The Democrats in Washington have become irrelevant. They lost control of the House in 2010, the Senate in 2012 and the presidency in 2016.

The Democrats need look no further for answers to this debacle than former President Barack Obama. His legacy is one of party devastation by making his entire presidency about him. It began early in his first term and continued unchecked for eight long years.

Obama was so entrenched in his idea of socialized medicine that he stopped at nothing to pass his signature legislation, Obamacare, without a single Republican vote. He went on to spend an inordinate amount of his presidency in the spotlight of his own personality as his party lost nearly 1,000 seats in state legislatures across the nation.

It seemed there wasn’t a fundraiser he didn’t like on a weekly basis. Even as word of the Benghazi attacks unfolded in 2012, he was on an airplane heading for a Las Vegas fundraiser.

His legacy has left the Democratic Party no choice but to obstruct and whine. Life as a congressional minority stinks. That is not to say those very wounds are not self-inflicted.

The Democratic leadership is old and weary. Former House Speaker Nancy Pelosi is 77. Her team on the bench includes Rep. Steny Hoyer (D-MD) and Rep Jim Clyburn (D-SC) at 78 and 77 respectively. They all emanate from coastal states. There is no Democratic leadership from the broad swaths of red state land between the Atlantic and Pacific.

Democrats should look long and hard at the heart of why Donald Trump won the election. Whining and obstruction through cries of Russian collusion and impeachment demands do little to set their political course. They are deaf to the simmering discontent and economic hardships of the Midwest and the frustrations of Middle America.

Then there is Senate Minority Leader Chuck Schumer (D-NY), considered a spring chicken in the upper echelons of the power structure at 66-years-old. Still waiting in the wings for her perceived resurgence is the embittered presidential loser Hillary Clinton at age 70. The same candidate who didn’t figure Wisconsin and Michigan to be important campaign stops in 2016.

Hillary’s heir apparent in recent polls is Sen. Bernie Sanders (I-VT) at 76. The Democrats are ageing faster than a ripe cantaloupe. What is their strategy to discover the youth movement?

It certainly will not come from the Democratic stronghold of California. Another of their old leaders in the Senate has plans to run again. Sen. Diane Feinstein has declared her intention to seek another six-year term. She is 84-years-old.

The argument from her supporters is her seniority and experience. To hail from an ultra-liberal state as she does, her roots indicate she is a Stanford-grad limousine liberal who hasn’t a real life clue what it is like to be a common Joe. That goes for her fellow state liberal, multi-millionaire Nancy Pelosi.

But Diane wants a fifth term which would put her at 92 when that one expires. She clearly does not embody the values of today’s angry, younger voters being born before the Great Depression. 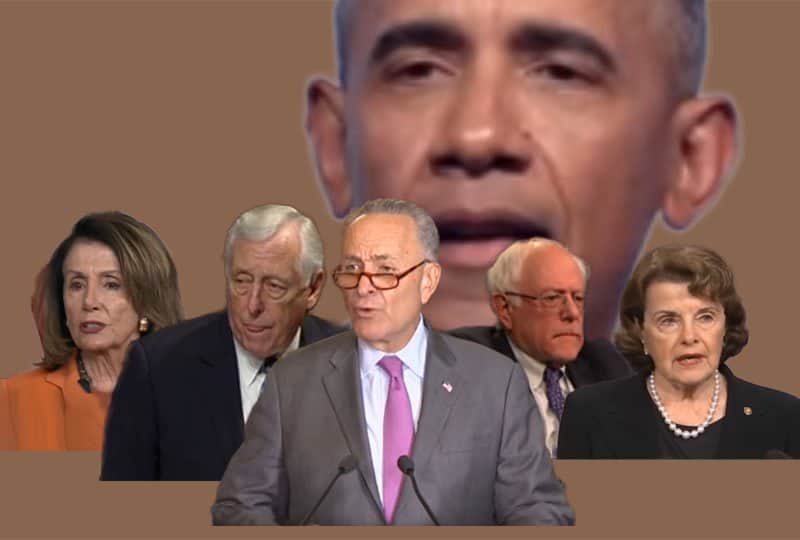 No Young Leaders At All

But between Feinstein and Pelosi, their tenure blocks any chance for advancement from a younger generation. As the gap between the two Americas widen, there is less likelihood that an ageing leadership can sustain a healthy democracy.

It has been proven time after time that Americans prefer a healthy two-party system. Lately that appears to be one party in the White House while the other holds Congress. Not the case in 2017 and most likely the foreseeable future.

If the Democrats are to gain the majority in either the House or Senate, it will not be of their doing. They have squandered their majority legacy one drip at a time since a man from Illinois assumed power in 2009.